Among other things, thicket of rules prohibits consuming cannabis in a moving vehicle or leaving a joint on a guest’s pillow
May 6, 2019 11:56 AM By: Tyler Nyquvest 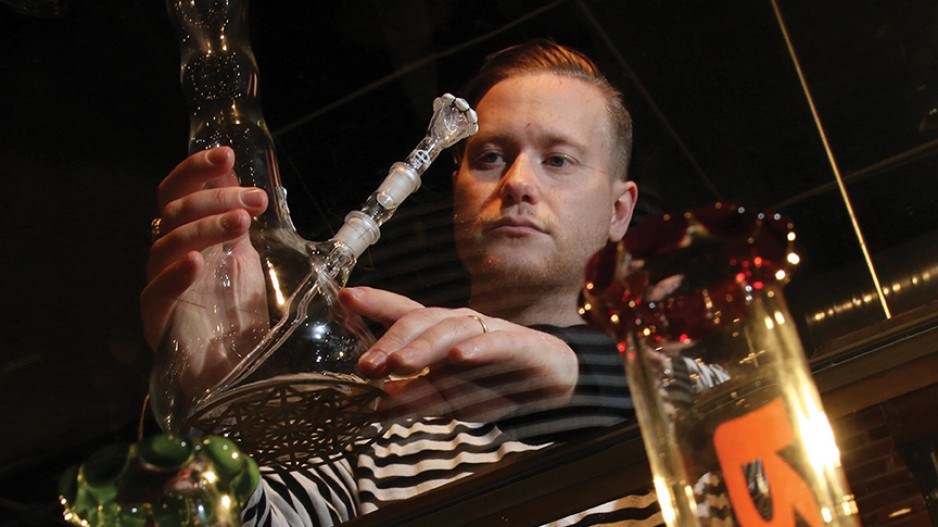 Keenan Hall and his company the Movement Cannabis Tours partnered with Puff cannabis accessories for a unique business opportunity, but plans have been put on hold. Photo Rob Kruyt

Entrepreneurs in the cannabis sector want to create businesses that cater to tourists — but are finding legal obstacles.

Tour companies, for example, are unable to have customers consume cannabis in the back of a van even when the guests are completely separated from the compartment where a driver would be. Bed-and-breakfast hosts similarly face legal challenges in that lawyers say that they are acting illegally if they leave a joint on a guest’s pillow or otherwise provide cannabis.

Cannabis lounges, where there is open consumption, are also illegal, according to provincial law.

These limitations are restricting aspiring tourism entrepreneurs at a time when the number of tourists who visit B.C. could be on the wane.

Vancouver, however, is estimated to have a 3.3 per cent jump in overnight visitors in 2019, according to the Conference Board of Canada, and some cannabis tourism entrepreneurs are putting on a brave face.

“We want to place together a package experience that not only highlights Vancouver’s cannabis industry but hosts fun things to do when you are consuming cannabis or learning about cannabis,” said the Movement Cannabis Tours CEO Keenan Hall.

When he launched his cannabis-themed tour company on Oct. 17, he planned to tailor an array of cannabis experiences for visitors. Since then, many of his plans have been put on hold.

“The lawyers that I have talked to have said that it is very clear that we are a service related to cannabis and that the Cannabis Act applies to us,” said Hall.

He initially planned to operate driving tours, where cannabis enthusiasts could be shuttled around various partner locations in Vancouver to enjoy a mixture of education, entertainment and adventure. Locations of interest could be the cannabis accessory store Puff, a poutine shop and a virtual reality game room.

Dentons Canada LLP partner Shea Coulson said tour companies that offer such itineraries could find themselves in legal jeopardy and liable for damages if guests have medical problems or injuries, or injure somebody else as a result of consuming cannabis.

Hall has since reworked his offerings to include three cannabis walking tours on Granville Island, which Hall calls Munchie, Canadian Cannabis Classic and Virtual Reality Adventure.

His company also offers classes to teach how to roll joints, make cannabis edibles and host events. Future tours may include visits to craft growers’ facilities, where participants can learn how to cultivate various plant strains, he said.

Cannabis smoking lounges are not permitted; neither is smoking in many public areas.

“Given the health impact of second hand smoke, I think there is a major uphill battle to lounges ever being legalized, so I would kind of take that off the table as a realistic possibility any time soon,” Coulson said.

Wine enthusiasts who tour wineries in the Okanagan are able to sample wines. That is not the case with cannabis, as sampling is not allowed at retail sites.

Sampling is also not permitted at bed and breakfasts, according to Coulson, because those businesses are not licensed retailers.

Then there is the problem with marketing, because the Cannabis Act restricts how cannabis tourism businesses promote themselves.

“We have to take into consideration the fact that our website and our promotional material cannot contain anything that invokes a positive or negative emotion,” Hall said. “We are trying to promote and sell experiences, which are very clearly related to the kind of emotions you would have in an experience.”

Social media advertising is near impossible because giants such as Facebook, which also operates the Instagram platform, are based in the U.S., where cannabis is still illegal at the federal level, he said.

Marketing B.C. to other countries as a destination for tourists who are interested in cannabis is another challenge because any advertising in those countries will be governed by those countries’ laws.