Device was created to offer second chances to blind dogs that are often abandoned
Jul 12, 2018 12:28 PM By: Sandra Thomas 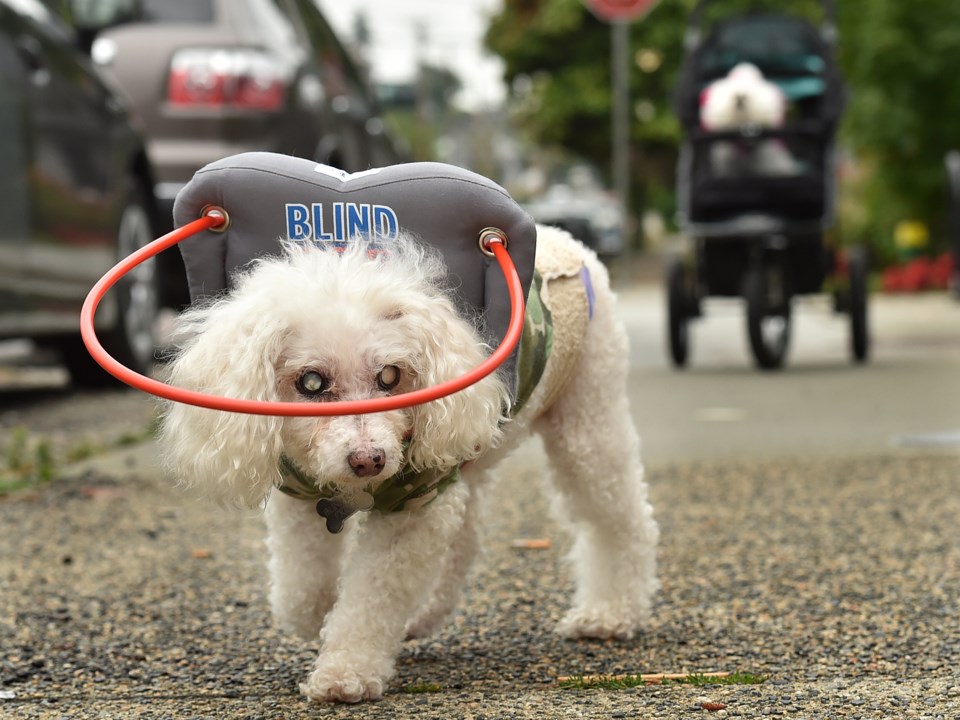 But because of the headpiece he wearing Prince wasn’t fazed — or hurt — as he continued on his way checking out this new space.

Creator Silvie Bordeaux says the device, dubbed “Muffin’s Halo Guide for Blind Dogs,” has given Prince a new sense of confidence. When Bordeaux adopted Prince three years ago after her beloved Muffin died, he was already blind.

“I adopted him from a woman who was dying and his name was Olaf,” says Bordeaux, who was born in Montreal. “But I renamed him Prince Michael after the Jackson family, who helped me get my start, and promised him a charmed life.”

The Sherman Oaks Calif., resident was in Vancouver for the annual Canadian Veterinary Medical Association conference, which ran July 5 to 8, to show off the halo, a three-piece device made up of a harness that wraps snuggly around a dog’s neck and torso as a way to make them feel less anxious, padded “angel wings,” which protect the dog’s shoulders and head, and a lightweight band made up of wrapped copper tubing or “halo” that encircles the face. When the halo bumps into an object, it sends a signal to the dog and they move in another direction, which is exactly what Prince was demonstrating as he cruised the Courier office.

Bordeaux says while dogs navigate using the halo, they also use their nose and brain to begin mentally “mapping” places they’re at most often, such as home or the dog park. That gives blind dogs a renewed sense of confidence and familiarity, says Bordeaux.

“People have said to me, ‘I have my puppy back,’” says Bordeaux, who adds that while dogs are living longer due to better care, it’s almost certain their eyes will begin to falter at some point. “That sunset is going to come down eventually.”

The inspiration for the halo was Muffin, Bordeaux’s senior toy poodle, which in 2012 began walking into walls and falling down stairs due to failing eyesight. When Muffin was diagnosed with a mass in his stomach and went through a botched surgery during which he was lacerated internally, Bordeaux says she got down on her knees and prayed for his survival. In her “pact with God,” Bordeaux promised if Muffin lived, she’d dedicate her life to helping as many blind dogs as possible. She says to date, that number is about 30,000.

“When I started working on a prototype, I didn’t know anything about fabric or grommets or cutting,” says Bordeaux. “I turned all my bedrooms and living room into a studio and started working.”

Today, Bordeaux has a small factory and team who build the devices, which come in a variety of sizes and designs, including a quarterback theme and military-inspired camouflage.Inspired by Muffin’s experience, Bordeaux created a non-profit foundation called Second Chances for Blind Dogs with a goal to supply shelter dogs with halos.

“When people go to a shelter to adopt a dog and they see one in a halo moving around, it takes away the stigma,” says Bordeaux. “Some people think it’s too hard to keep a blind dog or they can’t afford the vet bill for them so they get dumped at shelters. But the halo changes that.”

Bordeaux adds since it’s often senior dogs that needs a halo, once they die the owners typically donate the device to a shelter pet in need.

“So they donate the wings forward,” says Bordeaux. “There’s a wait list of dogs that need them. On the fourth of July I donated 15 halos so those dogs could celebrate their own Independence Day.”

In 2014, Muffin’s Halo was named one of the Top 10 pet inventions by the Discovery Channel’s Daily Planet Show. While checking out reviews on Amazon online, there were 93 “positive” posts compared to 42 “critical,” with fit seeming to be the biggest issue. The halos run between $80 and $140.