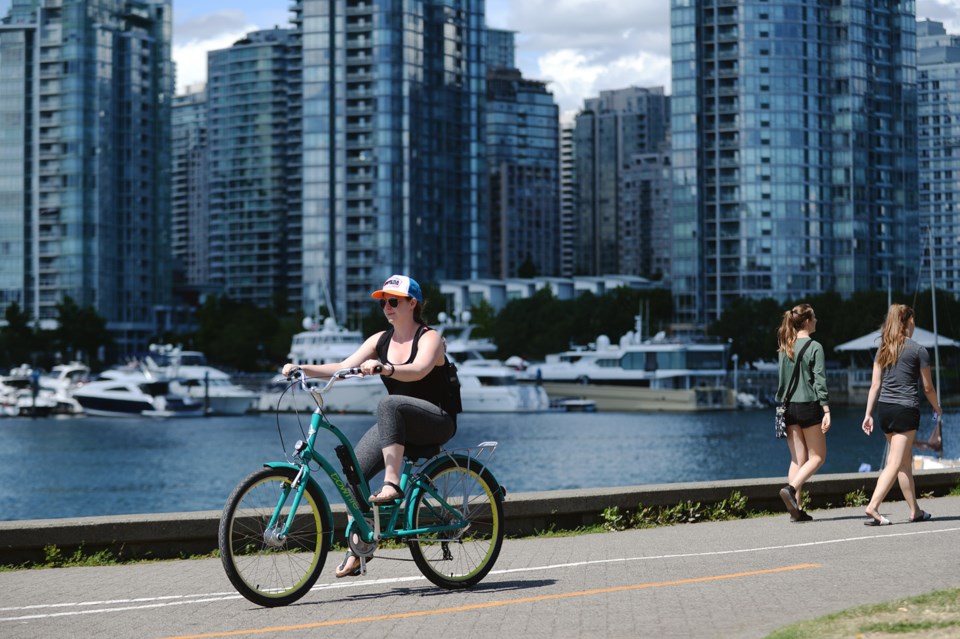 Colleen and Ian MacDonald have biked around cities all over the world — New York, London, Chicago, Bombay, Paris, Copenhagen, Rio — and they say Vancouver is hands down the best city for cycling.

“Greater Vancouver has it all and we want to show everyone how to get around safely while having fun,” the couple said in an email.

Colleen, a retired elementary school teacher, has long had a passion for biking and she’s turned that passion into a new book — Let’s Go Biking: Easy Rides, Walks & Runs Around Vancouver.

“I grew up in Vancouver, I’ve cycled here ever since and then Ian and I like to do cycling holidays around the world. As I cycle around I like to discover new routes,” she said in an interview.

Several years ago Colleen started blogging about her rides and sharing her routes at letsgobiking.net. The website boasts more than 150 rides around the Lower Mainland, Vancouver Island, the Fraser Valley, Okanagan and Washington State.

About two and a half years ago, she started compiling some of the routes for the book. Ready for sale starting July 11, Let’s Go Biking includes 84 different routes focusing on Vancouver, Burnaby, New Westminster, the North Shore, Maple Ridge, Tri-Cities, Surrey, Delta, Richmond, Abbotsford, Langley and the Fraser Valley.

She designed all the routes for “families, seniors, people who like to stop and smell the roses.”

“This isn’t for the Tour de France set,” Ian added.

Colleen has biked every route. As well she has a team of 50 “proof riders” who have also cycled the routes, suggesting tweaks and changes before a route was added to the book.

While the routes are designed for cyclists of all ages and abilities, from flat scenic trails to city greenways to quiet country roads, they are categorized as easy, moderate or adventurous.

The book was also designed to work fit in a map case that can be secured to the bike on the handle bars. Colleen said she paid particular attention to the size of the maps, ensuring it could be easily read while riding.

“It’s designed so that even I can read it and follow with a turn-by-turn so it’s right there in front [of the rider],” Colleen said.

Let’s Go Biking will be available at various book and bike stores, as well as on the website.

The couple, who live in Belcarra, is self-publishing the book and have plans to donate proceeds from sales of Let’s Go Biking to HUB Cycling, Trails B.C. and B.C. Cycling Coalition.

“Those are all cycling advocates, they do a lot of work for everyone in the cycling world,” Colleen said. “The profits are going to be re-invested in cycling.”