Ocean Endeavour is the first vessel to take visitors into these protected waters
Sep 15, 2019 9:00 AM By: Jennifer Bain 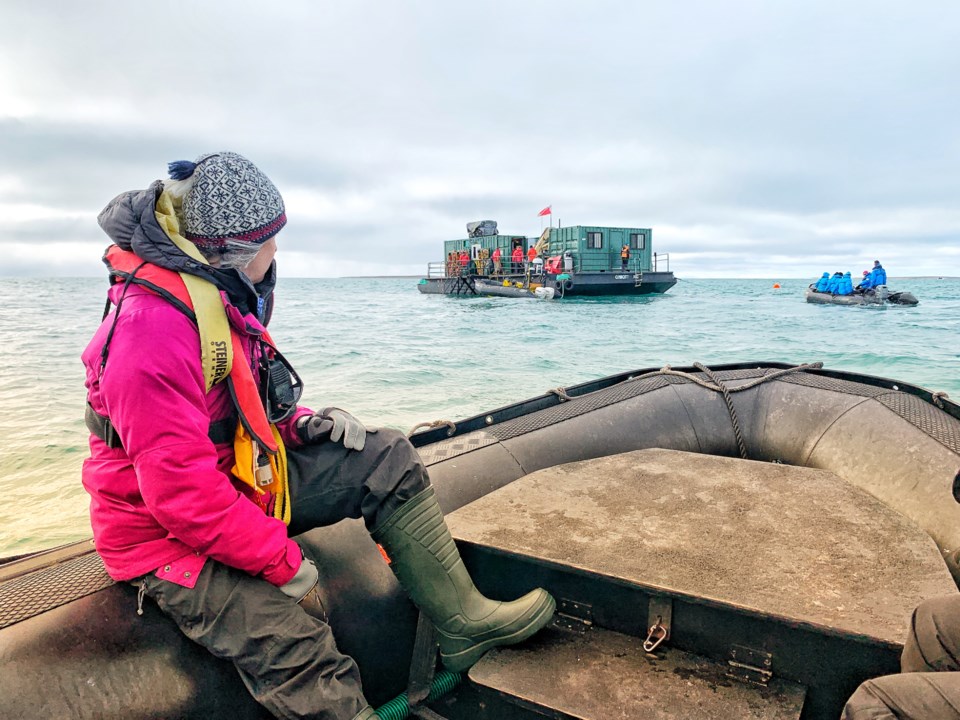 The excitement mounts as the Adventure Canada Zodiacs line up for their turn exploring the diving barge used to explore the Erebus shipwreck. Photo Jennifer Bain

To make our own historic, albeit modest, journey, we climb out of Zodiacs, up a three-step rope ladder and on to a forest green barge bobbing in the ocean in Nunavut.

We are not polar explorers, or even researchers, rather ordinary people on an expedition cruise that has just become the first vessel welcomed into protected waters for a visitor experience as divers explore the wreck of Sir John Franklin’s doomed HMS Erebus.

It is the sixth time in three years that Adventure Canada has attempted to bring people here, and the first time the treacherous ice and fierce winds have cooperated.

In the words of host David Newland — a performer, speaker and Arctic enthusiast — it feels like higher forces have gifted us this rare experience. It is Sept. 5 in what is clearly a lucky week.

Aboard the barge, Parks Canada’s underwater archaeology team is ready to test-drive its first visitor experience at Wrecks of HMS Erebus and HMS Terror National Historic Site of Canada.

As part of our permit to be here on the Ocean Endeavour, we must disable the GPS functions on our phones and cameras to protect the location.

We can’t disturb anything or take souvenirs. We can shoot photos from the boats, but can’t shoot underwater. Dropping anything is a serious concern. It won’t be retrieved and it will trigger an incident form.

Despite the fear of messing things up for this pilot project, we are giddy from seeing rare, embargoed drone shots of what the Erebus looks like standing upright and largely intact in just 11 metres of clear, calm water.

Today’s seas are choppy, though, so we just peer into the dark depths and imagine what’s below. Unforgiving weather creates a short research season, but part of Parks Canada’s mandate is to share its sites so this is important work, too.

Team manager Marc-André Bernier signals a diver to swim over to six Royal Navy-issued blue willow ceramic plates that were just discovered a day ago.

“I’ll admit the first 10 seconds in the ocean are painful,” allows Bernier. “Until the hot water kicks in, you do the polar dip.” The noisy water hose has been turned off for our tours, so we apologize for the discomfort we’re unexpectedly causing the divers.

Next we’re ushered into the artifacts lab, where we can’t take photos, but are shown six newly discovered objects — a black glass bottle that probably held liquor, ceramic bottle that likely held ink, leather boot sole, glass decanter, ornate wooden handle and tiny tongs that may once have been used for sugar cubes. The relics are being kept in shallow grey tubs of sea water.

Looking at these ancient objects transports us back to 1845 when Franklin and his men set sail from England on two ships, convinced they would find the fabled Northwest Passage, an imagined shortcut from Europe to Asia for trade purposes.

The ships soon disappeared within the Arctic Archipelago that is part of the Inuit homeland and now Canada’s youngest territory, Nunavut.

The full story still isn’t known, but the 129 men battled unrelenting ice, scurvy and lead poisoning from sloppily tinned food, and some resorted to survival cannibalism, before they all died over the next few years. The search continues for Franklin’s grave.

I read up on Franklin in the Ocean Endeavour’s library during the 18-day “Out of the Northwest Passage” trip through Nunavut and Greenland.

After we cycle through the barge in small groups, we zip over to the RV David Thompson. The pride of the Parks Canada research vessel fleet sleeps 14 and just spent a week at the Terror, has been here nine days and hopes to get another week of work done before the weather turns.

Underwater archaeologists Ryan Harris and Thierry Boyer regale us with details of how the sonar and film equipment works and reiterate how they’re mandated to engage the public about the wrecks.

“If everyone knows what they’re about, people will want to protect them and be fascinated by them just like we are,” predicts Boyer.

“You are part of the next chapter,” says Parks Canada’s Tamara Tarasoff, project manager for the site, who joined our ship in Kugluktuk for three nights to prepare us for this historic outing.

The questionnaires we fill out will help them decide when and how to let other cruises and smaller vessels into the restricted area. Parks Canada and the Nunavummiut (people of Nunavut) work together to preserve and protect the wrecks. The partnership, the first for a National Historic Site, reflects the critical role the Inuit played in the two discoveries.

The Inuit — who passed down oral stories about Franklin’s ships and men — make up a security team known as the Guardians who camp near the wreck site watching for unauthorized visitors or treasure seekers.

Six of them, along with an elder, come aboard our ship to chat, calling the work “the best job in town” and they saying it’s nice to get out of town and use their survival and hunting skills.

Before we move on to a cruise that includes polar bears, musk-ox, whales, icebergs, seabirds, the polar barrens (polar desert), remote parts of Nunavut and even remoter parts of Greenland, we visit the Guardians’ town.

Gjoa Haven is the keeper of the Franklin story and the “Heart of the Northwest Passage,” according to the brochure and map we each get when we arrive.

The Inuit hamlet of 1,446 people on King William Island was named for Norwegian explorer Roald Amundsen, the first European to transit the Northwest Passage aboard his ship the Gjøa. Known by its Inuktitut name as Uqsuqtuuq (“Place of Plenty Blubber”), the community has an annual Umiyaqtutt (shipwreck) Festival and hosts only a half dozen small cruise ships each year.

We are welcomed by two drum dancers, eight square dancers, one singer and a four-piece band. The Nattilik Heritage Centre showcases the traditional Inuit lifestyle and sells local carvings. An area devoted to the Franklin story is poised to expand.