They say that everything’s bigger in Texas. In Houston, that’s certainly true of the hats, the boots and the servings of barbecue. But the saying also applies to an unexpected public art program that’s taking over the streets of downtown.
May 17, 2017 2:09 PM By: Christina Newberry 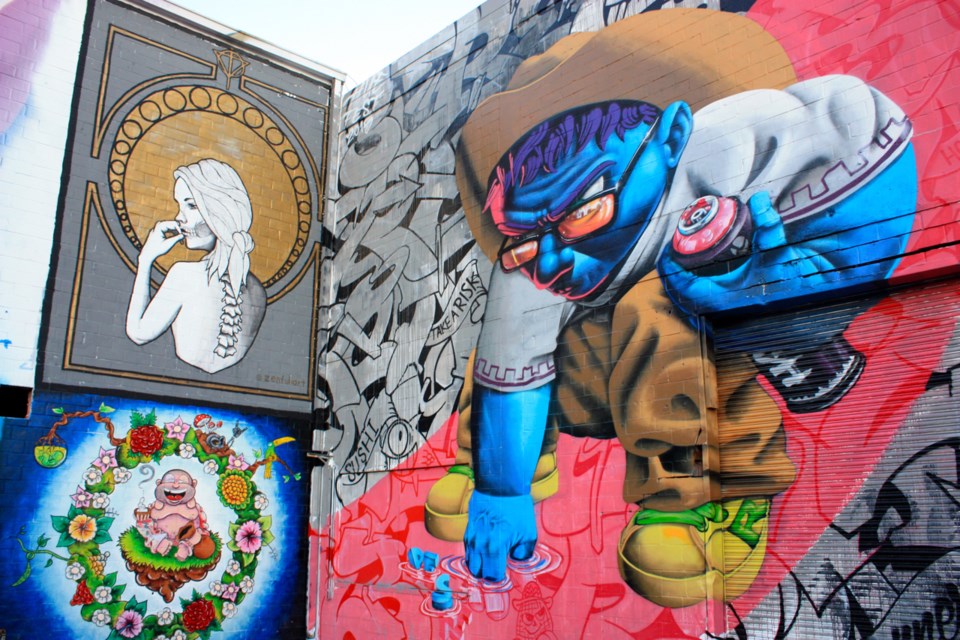 They say that everything’s bigger in Texas.

In Houston, that’s certainly true of the hats, the boots and the servings of barbecue. But the saying also applies to an unexpected public art program that’s taking over the streets of downtown. Recently, 100 international artists transformed 20,000 square feet of wall space into city-sanctioned street art for the second annual Houston Urban Experience (HUE) Mural Festival. Add that to the 25 walls painted for the inaugural festival last year, and it’s clear that there’s a Texas-sized appetite for street art in H-Town.

My guide to the artwork takeover is the founder of the mural festival, Mario E. Figueroa Jr. — a pioneer of the graffiti art scene in Houston better known by his tag, Gonzo247. Decked out in paint-splattered jeans and cowboy hat, he certainly looks the part when we meet at the Graffiti and Street Art Museum of Texas, which he opened last year.

Gonzo has been working to bring graffiti out of the shadows in Houston since 1990, when he started the Aerosol Warfare project to document the city’s emerging street artists. Over a lifetime of street artistry, he’s become a passionate advocate for the importance of recognizing graffiti as a legitimate art form that has the power to transform communities.

“When a property owner, a community, a city forgets an area, darkness grows,” he says. “The mind tunes out dilapidated areas — there’s no point in seeing it. But I have to see it every day, so I’m going to make it beautiful for me.”

Gonzo’s work with property owners and officials to create space for vibrant, legal street art in Houston has helped make graffiti murals an iconic art form in the city. He remains heavily involved in the festival, helping to select the artists who will leave their mark on Houston, coordinating logistics and even leading tours to see the artists at work. Since many of this year’s artists are from Latin America, he also serves as a passionate translator, relaying the artists’ words to the media, tourists and locals as they explain in Spanish the stories behind their work.

Diego Alvarez, who works under the tag Ocote, is a social psychologist from Mexico. We find him at the Talento Bilingue Houston building, where several Mexican artists are creating new works for the HUE Mural Festival. Ocote has a challenging wall to work with — it includes a light fixture, which could interfere with the design. Instead, he’s found a way to incorporate the light as a radiant point of connection between male and female. His piece, Anima/Animus, portrays Carl Jung’s masculine and feminine archetypes as ancient Mexican gods, captured in modern fluorescent colour. Chatting about the message behind the piece, he echoes Gonzo’s thoughts about the role of public art in the urban environment.

“Through your art, you can start something in the public that will start a fire in your consciousness,” he says.

A couple of kilometres away, in an area informally known as Graffiti Park, Houston native Sayra Vallejo is working on a wall with two roll-up metal doors. She’s tackling the right-hand side when we arrive, layering on thick lines of paint that drip and slide, blending into each other to create new colours as they fall.

“As it drips it all comes together and it just works,” she says. “It’s all love.”

Back at the museum to end the tour, we have a celebrity sighting of sorts: brothers Icy and Sot, graffiti world superstars who sought asylum in New York after several arrests in their native Iran. They have just come from working on their Justice mural at Graffiti Park. They’re shy when the tour group comes in, but it’s clear they’re enjoying the camaraderie of the festival, just hanging out and chatting about the art that is the centre of their lives. Having brought artists together from around the world, the mural festival has transformed Houston into a Texas-sized open-air gallery that radiates with colour and passion. Lucky for visitors, the art is there to stay long after the mural festival ends, right on the walls, just waiting for you to come and see.

Works from the 2016 HUE Mural Festival can be found in Houston’s EaDo, East End and Northside neighbourhoods. You can download a list and Google map of mural locations from the festival’s website: HUEMuralfestival.com.
If you’re short on time, head straight to the Re/Max Inner Loop building at 2011 Leeland Street, which anchors Graffiti Park. You’ll spot a Gonzo247 Houston mural backed by the city skyline at the corner of Leeland and St. Emanuel streets, and a quick stroll reveals dozens of murals by well-known international street artists, including Icy & Sot.