The Fair at the PNE opens tomorrow (Aug. 18)

It's a year of milestones for the PNE, including 40 years of SuperDogs, 50 years of the Pacific Coliseum and 60 years for the wooden roller coaster
Aug 17, 2018 2:42 PM By: Sandra Thomas 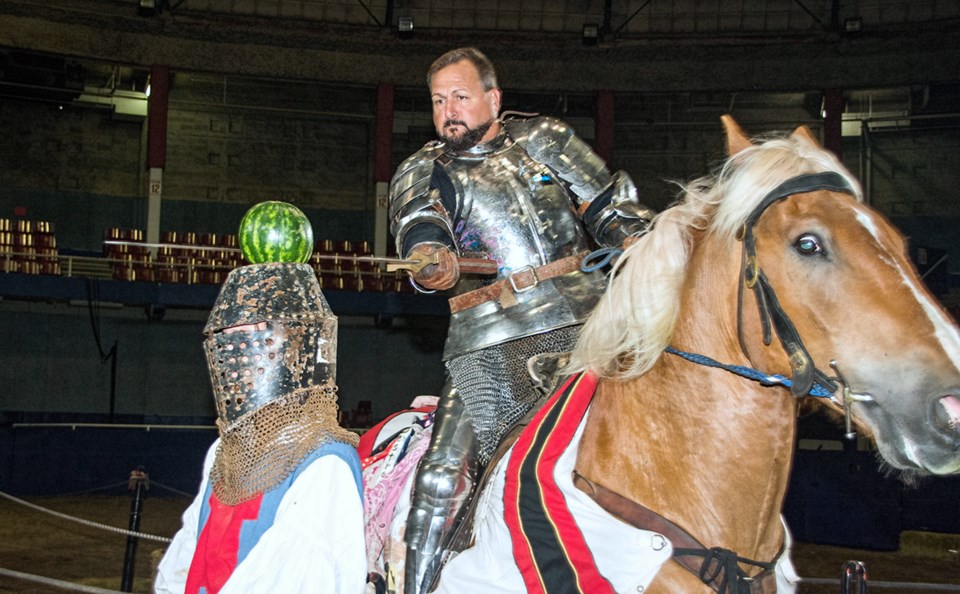 Charlie Andrews and Jägermeister are two of the stars of the Knights of Valour live shows at the Fair at the PNE. Photo Chung Chow

From 1978 to 1980 it was Musketeer, Wolfgang and Dandy who ruled the Pacific Coliseum.

But then between 1980 and 2010, it was stars such as Turbo, Pot Roast, Fast Annie and Bubba that were thrilling the crowds. And now, 40 years since the creation of the SuperDogs, it’s 7 Up, Popcorn, Reef, Kismit, Beaker, Siren, Beezer, 3 Little Pigs, Chester, Hip Hop, Shock and Puff Daddy that will be showing off their agility and stamina daily during the Fair at the PNE, which runs from Aug. 18 to Sept. 3.

Just days before the fair opened, PNE staff gathered to celebrate that 40th birthday with a cake created by a local dog bakery and the SuperDogs were invited to take bites — two dogs at a time. This celebration, dubbed Happy Barkday, will run daily at the Pacific Coliseum during the Fair at 12:30, 2:30 and 6:30 p.m. so all fairgoers will have an opportunity to wish the President’s Choice SuperDogs a happy birthday. (Free with admission.)

New PNE president and CEO Shelley Frost says staff and crews have been working round the clock to prepare for the opening of the fair, a highlight of the year.

"It's a lot of hours, but also a lot of fun," says Frost, who previously was part of the PNE's executive team for 15 years.

It’s not just the SuperDogs celebrating a landmark year at the PNE — 2018 also marks the 50th anniversary of the Pacific Coliseum, the first home of the Vancouver Canucks, and the iconic and much loved (feared) wooden roller coaster turned 60 this year. (See video here.)

But it’s not just the past the PNE is celebrating this year. New to the fair this year is POPnology, which chronicles pop culture and technology “from science fiction to science fact.”

This is a fun attraction located near the Coliseum that both kids and adults are going to really enjoy. Adults will get a kick out of the displays showcasing vintage memorabilia, including the device created to allow the space alien E.T. to “phone home,” the DeLorean “time machine” from the 1985 movie Back to the Future, and one of the creatures from the Alien movie franchise first released in 1979.

Meanwhile kids of all ages will want to meet with the friendly robot cruising around the space, check out the first 3D printed car and try the virtual reality headsets. Fairgoers can choose from a number of short VR films created to test their bravery. I chose the one featuring a close encounter with a very angry/hangry Tyrannosaurus rex and, without giving anything away, it was very realistic. The goal of POPnology is to inspire enthusiasm for the science fiction of today and technological reality of tomorrow. (Free with admission.)

After checking out the futuristic displays at POPnology, visitors to the fair can take a step back in time at the Agrodome where the Knights of Valour jousting show takes place live at 1, 3 and 7 p.m. daily. These are real live knights in shining armour — a couple of hundred pounds worth of shining armour, to be exact — who ride into battle with the intention of knocking each other off their horse using blunt-tipped lances.

The Knights of Valour are made up of world-class athletes, including Shane Adams, executive producer and host of the History Channel’s TV series, Full Metal Jousting. And demonstrating his champion jousting skills during a pre-PNE media tour Aug. 16, was Charlie Andrews on his gorgeous charger Jägermeister. The jousting is the real deal and the Knights of Valour take their sport very seriously, so it’s a spectacle to watch. (Free with admission.)

Also new this year is the Lost World of Dragons, which celebrates the wonder of dragons and gives visitors of all ages the thrill of seeing them brought to animatronic life.

Car enthusiasts will want to take a stroll along the Street of Dreams presented by 360 Fabrication (Miller Drive) where refurbished, classic cars are on display along Vintage Lane and hot rods are lined up in Camshaft Court. Miller Drive dates back to the 1910 — the early days of the Fair — and runs along the front side of the agricultural complex. At the time, it created a grand entrance to the fair so it’s fitting the Street of Dreams will showcase some of the best collectable cars from that era and others, including a $1 million 1963 Lincoln that’s rarely on display to the public. The exhibit is open 11 a.m. to 11 p.m. and opens on the first day of the fair, Aug. 18. (Free with admission.)

Here are five more reasons to visit the Fair at the PNE:

Show off your guns on the High Striker, try your luck at the Skatterball and practise your aim on the Ring Toss — all in hopes of winning that gigantic, stuffed teddy bear.

From the Crazy Beach Party to the Atmosfear to the Flutterbye, the fair has dozens of rides at varying levels sure to thrill all ages.

Are you ready you try the cricket covered caramel apple, the garlic vanilla milkshake burger or the one-pound meatball? Or maybe you’d rather stick the basics and chow down on mini donuts, corndogs and barbecue. Whatever you choose, make sure you pick your next ride carefully.

A PNE gate pass gives fairgoers free access to way too many shows to name here, but some highlights include, Action Sports World Tour (new), Mermaid Tales, Safari Adventure with Action Austin, the Canada Showcase and Nova: the Emergence of Light (new).

Also free with admission, though you can also purchase tickets to guarantee a seat, is the nightly Summer Night Concert Series. Where else are you going to find the Village People, Dean Brody, A Flock of Seagulls, Chicago, Boys ll Men or Temple Grandin in one venue over the course of two weeks? (Full disclosure, I already have my tickets for Kool & the Gang.)

The Fair at the PNE runs from Aug. 18 to Sept. 3 (closed Aug. 20 and 27). For a complete schedule, visit pne.ca/thefair. Most shows and displays are free with admission to the PNE.