Four notable chefs from Vancouver shared plant-based recipes with the Courier, plus one of my own faves
Jan 13, 2019 7:00 AM By: Sandra Thomas 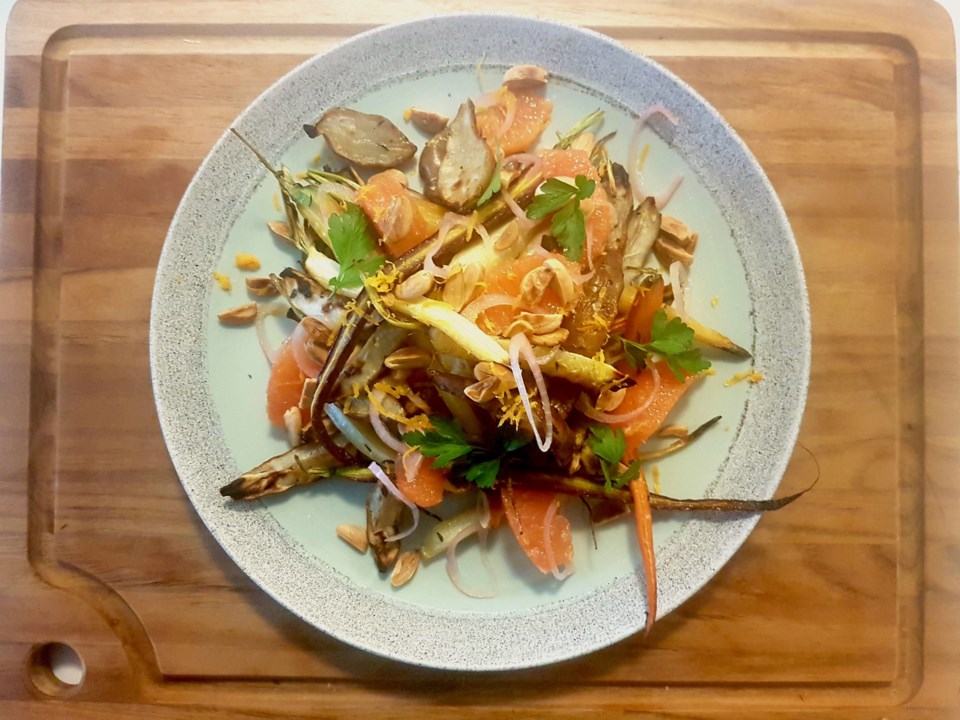 Proponents of a plant-based diet tout its benefits for not only your health, but also the planet’s. But giving up meat can be tough, which is why we went to some notable Vancouver chefs who offered up recipes delicious and colourful enough that even the biggest meat eater in your home will be happy. A plant-based diet is one that either excludes meat all together or minimizes its use.

And, because I have my own favourite, which I made up myself and is super easy to make, I included my recipe for roasted radishes as well.

1 lb sunchokes washed well, cut lengthwise in half — larger ones can be quartered if desired

1 bunch rainbow carrots, washed well and cut lengthwise in half — longer ones can be halved across the length if desired

1 cara cara orange, zest first and reserve, then peel and cut into segments

Alternatively, blood oranges can be used when in season

10-12 rings of pickled shallots (recipe below)

Toss together sunchokes with olive oil and kosher salt until evenly coated.

Spread out into an even layer on a baking sheet and roast in preheated oven until golden brown and soft throughout (approx. 40 minutes)

Meanwhile, midway through the sunchokes cooking, toss together rainbow carrots with olive oil and kosher salt until evenly coated.

Spread out into an even layer on a baking sheet and roast in the same oven as the sunchokes until lightly caramelized and soft throughout, approximately 20 minutes

Serve on a plate or platter, ensuring an even distribution of sunchokes and carrots. Garnish randomly with orange segments, marcona almonds, parsley leaves and pickled shallots

Immediately remove from heat and pour directly over the shallots. Allow to cool to room temperature

Dry roast the spice in oven

Use a high-powered blender to puree the remaining ingredients

Season with salt to taste

1 head of watercress washed and stems trimmed for garnish

1 head of watercress washed and the stems trimmed

Blend all of the ingredients until smooth and bright green

Preheat the oven to 375 degrees-F

Steam the cauliflower for one minute to par cook

Place on a baking tray, drizzle with olive oil, and sprinkle with fleur de sel and pepper to taste

Liberally toss the warm cauliflower with the pistou and present in a shallow bowl, add the watercress and pine nuts and drizzle with olive oil, sprinkle with fleur de sel and pepper before presenting

On a half tray, spread out part A and pour part B over tofu

Using a weighted half tray, press firmly for 30 minutes

Bake in preheated oven for 10-15 minutes

Remove from trays and refrigerate

(Even my veggie-phobic husband loves these.)

Serves two as a snack, four as a side dish

Toss radishes, olive oil, salt, pepper and garlic powder together in a bowl and spread on a cookie sheet lined with parchment paper, sliced side down

After 10 minutes toss the radishes and cook for another five to 10 minutes, depending how caramelized you like them

Spoon radishes into a bowl and sprinkle with lemon juice