Joan-E and Carlotta Gurl will perform from the couch on Facebook Live in hopes of entertaining people self-isolating at home
Mar 20, 2020 11:51 AM By: Sandra Thomas 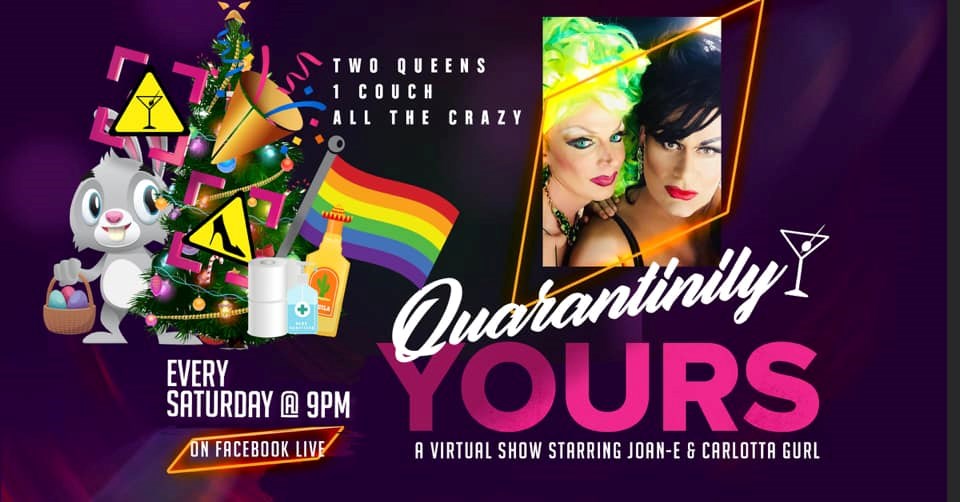 Two Vancouver drag queens want to do their part to keep the public entertained in the midst of self-isolation and quarantines due to the COVID-19 pandemic.

Dubbed Quarantinily Yours: Two Queens – 1 Couch – All the Crazy, the show will begin on Facebook at 9 p.m. and continue weekly until the public health state of emergency has been lifted and bars and restaurants reopen.

The City of Vancouver officially declared a public health state of emergency March 19, while the province declared one the day before, in light of the ongoing COVID-19 pandemic.

As part of that, the public has been asked to practise social distancing, self isolate or self quarantine –- in other words, stay home.

In a Facebook message to the Courier, Kaiser wrote that with live shows cancelled for the foreseeable future they decided to carry on in an effort to entertain and amuse those self-isolating at home.

“So we do what queens do, we make do,” said Kaiser. “We’d like to give people something to do, create community and do the work we’ve always done."

The long-time friends are known for making people laugh during their performances, both together and solo.

“Both Carlotta and I believe that laughter is always necessary, especially when the going gets tough,” said Kaiser. “The show is us on Carlotta’s couch singing a few songs, telling a few salty stories, discussing the new world order and drinking. Everything designed to make people laugh at, and with, two Vancouver queens who have been around long enough to see a great deal.”

Finally, will Carlotta be performing one of her famous cartwheels?

“Cartwheels might be hard in a Westend one bedroom, but I’m sure she will try,” said Kaiser.

Between the makeup, clothing and performing, each Facebook Live will take hours for Kaiser and McDonald to produce, so, as with any drag show, while anyone can watch, tips will be gratefully accepted for their efforts here.

You can find more information about how to watch the show here.