Vladimir Tsvasman is the Lifetime Senior Volunteer of the Year
Sep 8, 2019 9:00 AM By: Sandra Thomas 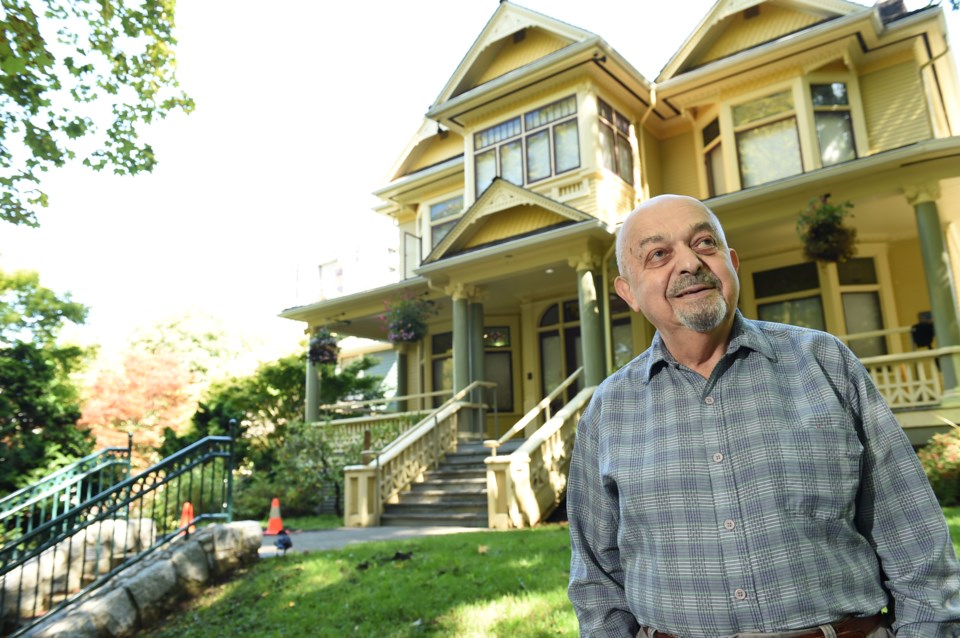 Lifetime Senior Volunteer of the Year Vladimir Tsvasman has been volunteering at Gordon Neighbourhood House and with the West End Seniors Network since 2013. Photo Dan Toulgoet

In an attempt to inform Vladimir Tsvasman that he had been named Lifetime Senior Volunteer of the Year, “Vlad” as he’s known, couldn’t help but crack a few jokes.

The fact Vlad assumed he was being scammed — and that he had not actually won $1,000 worth of groceries from Stong’s Market — meant the one liners kept coming. But, after about five minutes on the phone, followed with a phone call back to the Courier to double check, Vlad seemed almost embarrassed for being recognized for something he sees as an everyday act. His second response demonstrated just the kind of man Vlad is.

“But how am I going to share groceries with Gordon Neighbourhood House? Can’t I have the cash?”

Vlad was nominated for the annual award by the West End Seniors’ Network and Gordon Neighbourhood House, and their letter could best be described as “glowing.”

“Vlad’s reliability and flexibility have been unwavering,” the nomination letter reads in part. “He can be counted on for both long term commitments and for last-minute coverage. For example, he provided accompaniment to one senior’s weekly medical appointments for more than a year — a crucial lifeline…”

Just some of Vlad’s other volunteer duties over the past six years include helping with the Barclay Manor reception desk, the garden committee and medical appointment transportation service.  Meanwhile at Gordon Neighbourhood House, Vlad lent his time to the urban gardening program growing herbs and vegetables used in food programs.

Recently, due to some health issues and surgery, Vlad had to leave some of his more strenuous duties behind, but now instead of gardening, he can be found answering phones and volunteering at community lunches. On the day of Vlad’s photoshoot, he was anxious to leave on time due to the fact he had volunteered to drive someone to an exercise appointment — so maybe he hasn’t slowed down that much.

During the photoshoot, he spoke of his life before moving to Canada with his wife Galina from Russia. The couple arrived in Toronto in 1974, before moving to Vancouver in 1994, due to his wife’s asthma. While Galina was able to continue teaching, Vlad said his English was not good enough to continue working as an engineer, so for years he took any job he could find to make ends meet before finally landing a permanent job as a property manager.

When Galina passed away in 2013, Vlad thought his life was over. Ironically, it was a car accident that led Vlad to his first volunteer job and also the first of many “second chances” he feels fortunate to have received.

“The first few years I didn’t know what to do, I didn’t want to see anybody and life lost sense to me,” said Vlad.

As a result of the car accident, he ended up dropping into the West End Coal Harbour Community Policing office, and it was there the president recruited him to volunteer.

“That was like being given a second chance to live,” said Vlad, who then applied for volunteer jobs at the West End Seniors Network and Gordon Neighbourhood House. “But then last year I got a surprise and was told I have prostate cancer so I had to quit the police community centre. But after some treatment, I’m doing OK, so far so now I can breathe and have another chance at life.”

But then earlier this year, Vlad began having difficulty breathing while he was walking, and he was referred to a cardiologist. One week later, Vlad underwent bypass surgery to his heart.

“And now I have another chance at life,” Vlad joked.

Vlad believes volunteering is something everyone should try. He brought that subject up at a barbecue several weeks ago with a group of “younger” men — Vlad recently turned 80. During the barbecue, Vlad asked the men, “Tell me please, what is the purpose of life?” He said the men offered several suggestions, from having a son to owning a home to planting a tree.

“I said fine, but what else? And they said, is that not enough?” Vlad remembered. “And I said no.”

Vlad then told the men his theory on the purpose of life.

“The purpose of life is to give back to society. You have a son — you give back to society. You build a house — you pay for supplies and labour. And if you plant a tree, one day people will sit in the shade of that tree,” said Vlad. “Now that I’ve started work as a volunteer, I noticed I’m still alive and people need me. I like to help people, and that is the meaning of life. Life is unpredictable, it gives you second chances that you must take.”

When asked what he likes most about volunteering, Vlad offered these thoughts:

“When someone comes in and they look sad, I like to cheer them up, and you can see the face of the person completely change,” said Vlad. “And that makes you feel completely different because you did something. But the most important part is you don’t expect to get paid — you do it for free. It’s from the heart.”

Vlad is being honoured with his award at the free Lifetime Seniors Talks + Tables event at VanDusen Botanical Garden, Sept. 18.