Zero waste retail predicted to survive and thrive in Vancouver

The city's second bring-your-own-container store set to open as Vancouver bans single-use plastics
May 26, 2018 10:28 AM By: Omri Wallach 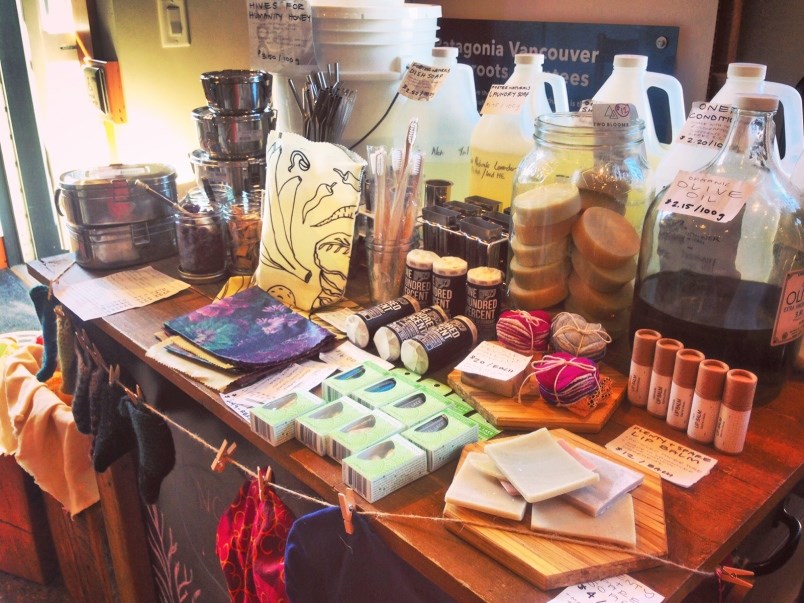 A selection of local and ethically sourced products at the Nada pop-up shop.Amy Logan

Vancouver’s zero-waste movement could be more economically viable than merely trendy as Nada, a grocery store where customers bring their own containers, is set to open on the corner of Fraser Street and Broadway in June.

The zero-waste store will be the second such venture in the city, following the Soap Dispensary/Kitchen Staples expansion into groceries in September of last year. They join other stores across Canada, including West Coast Refill in Victoria, Nu Grocery in Ottawa and Épicerie Loco in Montreal.

The success of these businesses could demonstrate that low- to no-waste shops can survive and thrive in a rapidly evolving and increasingly environmentally aware retail marketplace.

The City of Vancouver recently passed motions banning single-use plastics such as straws and foam containers by June 1, 2019, with aims to reduce plastic bags and coffee cups as part of a drive to be the world’s greenest city by 2040.

Stores like Nada are the embodiment of the zero-waste movement and are eager to help consumers and businesses see alternatives to single-use plastics. The store, which operated as a monthly pop-up in Kitsilano for two years, won’t have any disposable containers for walk-in customers looking to get produce or other groceries.

“No plastic or paper bags, only reusable items,” said Alison Carr, Nada’s buyer and supplier relationship manager, in a conversation with Business in Vancouver.

She said the store will encourage customers to bring containers and work with organizations to provide reusable bags.

“[Owner] Brianne Miller started the pop-ups to test the model,” said Carr. “We were doing incredibly well; with only a few hours and a few volunteers we covered costs and then some.”

But groceries are a low-margin industry, which entrepreneurs attempting to run zero-waste stores are quick to recognize.

For Linh Truong, owner of the Soap Dispensary/Kitchen Staples on Vancouver’s Main Street, that means looking for alternative revenue sources.

“I realized immediately that we can sell food but [should] offset that with merchandise,” said Truong.

Her store sells spices, oils and other pantry goods alongside higher-margin items like lunch-box sets and reusable toothbrushes.

“It’s not that different from a conventional grocery store,” said Truong. “You have chocolate bars right at the till to offset that broccoli.”

Truong started operating Soap Dispensary in 2011 as a bring-your-own-container store for soaps and shampoos. She added food products in 2015.

From the beginning, she could tell there was a demand for stores following a similar model despite difficulty starting out.

“I had people reaching out to me from around the world asking me to franchise within the first month. We lost money for the first three months of running the store, but people wanted me to franchise? It was encouraging.”

Truong added that she sees other zero-waste stores opening to immediate success and receives weekly requests for help from entrepreneurs looking to start their own stores, including Nada and two other businesses opening in Chilliwack.

“Everywhere I look, I see [zero-waste stores] thriving and expanding.”

Truong’s store expanded to 2,000 square feet from 500 in seven years, and newer stores like West Coast Refill doubled their space in only six months.

But compliance with Vancouver Coastal Health (VCH) regulations prevents a lot of conventional grocers from allowing reusable containers in their stores and was a key reason Truong did not expand her store into grocery sales earlier.

“In 2013, [VCH told me] that they would shut down a business that has customers bringing their own containers,” said Truong, “but I talked to a different agent in 2015, and they were super supportive.”

Although there is no law preventing customers from bringing their own containers to use in grocery stores, it’s up to individual health inspectors to determine what is unhygienic.

Stores like Whole Foods Market, which once allowed customers to bring their own containers, are therefore at the mercy of different health inspectors. Truong said that some suppliers didn’t want to work with her store because they didn’t want to get in trouble with VCH.

In an email to BIV, VCH affirmed that it’s working with the City of Vancouver to amend food safety and sanitation plans to accommodate reusable containers.

Until then, businesses considering moving to reusable containers should contact VCH to avoid any potential problems or failed inspections, which is what Nada did.

Like Soap Dispensary, Nada will also seek cash flows outside of groceries, but each store has a different focus. Nada will also sell products like reusable containers and straws, but a new initiative will be a snack and smoothie bar, which Carr said also allows the store to use produce that’s not perfect for shelves.

The City of Vancouver’s recent decision on single-use plastics has many businesses looking for such alternatives, and, according to Lisa Papania, a professor at Simon Fraser University’s Beedie School of Business, businesses will be lowering costs in the process.

Papania has been lecturing on business strategy and innovation for 15 years and has been running her own zero-waste business, Lupii Cafe in Champlain Heights in Vancouver, since 2015.

She understands that for businesses, the upfront investment necessary to have reusable containers can seem insurmountable.

Papania noted that upfront investment can generate significant reductions to marginal per-cup costs and that stores will have made their money back within 43 uses of a cup. In her eyes, the onus is on banks and the government to allow startups the room to make these investments.

“We make it impossible for startups.”

Papania added that the government should again offer to match funds for some startups, and that banks shouldn’t limit them with onerous restrictions.