14 brain surgeries and still smiling: resilient teenager refuses to give up 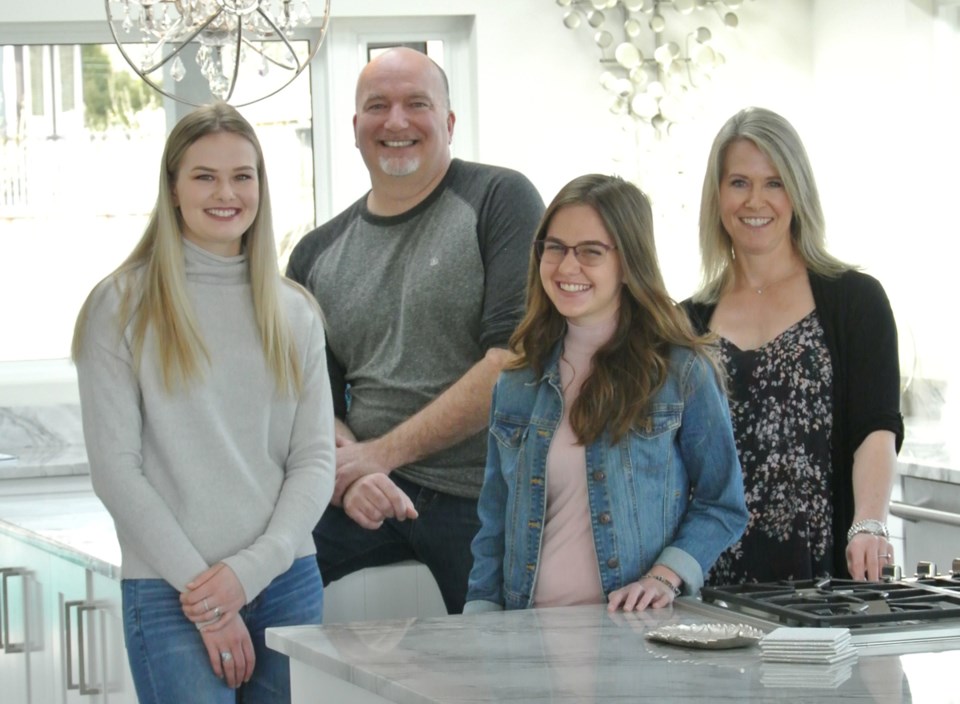 Together the McGills — Kheya, Sean, Taylin and Erin — have found the strength to overcome the challenges resulting from the 14 brain surgeries that Taylin has had to endure. Photo Martha Perkins

Taylin McGill was only 10 days old when her mother’s intuition kicked in. Something was seriously wrong.

What Erin McGill didn’t realize as she anxiously drove her listless baby to B.C. Children’s Hospital was that this was about to become the family’s new normal. Taylin’s illness, and the illnesses and challenges to come, would upend all of their lives. They would spend months sitting by Taylin’s hospital bed, stare down death numerous times and find strengths they didn’t know they had. But together the Tsawwassen family would also discover gratitude for the simplest of life’s joys and be awed by the community of support that’s been built around them.

Sixteen years after Taylin was diagnosed with salmonella bacterial meningitis — a life-threatening infection followed by swelling in her brain that resulted in hydrocephalus and, later, brain damage and epilepsy — she gave a speech about her years in and out of hospital. In it, she poked good-natured fun at the Vancouver Canucks who were in the audience.

“I’ve had 14 brain surgeries, five lumbar punctures and seizures that have lasted as long as 90 minutes,” Taylin told the hockey players before she delivered her punchline. “And you think you’re tough?”

“I’ve had 14 brain surgeries, five lumbar punctures, years of seizures up to 90 minutes long, and you guys think you’re tough?” - Taylin, an outgoing teenager once giving a speech at the Canucks’ Dice and Ice fundraiser. Taylin’s early childhood was marked by very long, severe seizures, and multiple surgeries. At three years old, Taylin was left in a coma-like state after an emergency medical situation. She was temporarily mute, had impairment in her left eye, and was unable to use the left side of her body for several months. She suffered permanent short-term memory loss and worked hard with specialists to re-learn how to walk, talk, and eat again. But Taylin’s story is not one of sadness, it’s one of resilience. #PurpleDay #EpilepsyAwareness

When Taylin tells this story a year later, her smile not only reaches her eyes, it consumes them. Her entire face beams the way it does in photos of her in her hospital bed, her right eye covered in a bandage because of permanent damage to an optical nerve, her scalp a criss-cross of sutures after having spent hours in the operating room just a day earlier. She’s an imp.

A family can never be prepared for all the traumas that the McGills have been through, but if ever there was a family with the ability to endure, it’s this one. On April 24, when Taylin takes to the stage to receive the 2019 Courage To Come Back award in the youth category, she’ll share the accomplishment with her mom, dad Sean and 20-year-old sister, Kheya, just as they’ve shared all the ups and downs that have earned Taylin such a prestigious distinction.

It won’t be the first public recognition of Taylin’s resilience and remarkable, happiness-filled spirit. In 2018, she was chosen as the Air Canada/Canucks Mark Maker.

She was the B.C. Children’s Hospital Foundation and Children’s Miracle Network Champion Child in 2017.

In addition to earning the Canucks’ respect, she was the Vancouver Whitecaps’ inaugural kid captain.

Delta Rotary gave her the Inner Strength award in 2015, and her speech at Tsawwassen’s Me to We event was just one of the ways she’s spread her message of hope and gratitude.

But it’s in her day-to-day interactions that Taylin really shines. She’s unfailingly cheerful as she accepts and copes with whatever comes her way. She understandably showed frustration when a surgery left her mute for a few weeks and had a meltdown when the nurses needed to shave off her hair in preparation for yet another surgery — Taylin convinced them to leave enough for a comb over — but those are tiny blips in her demeanour.

Her happy-go-lucky nature is evident in her daily interactions with friends at school and teammates on her beloved Special Olympics baseball team. One day her father picked her up from school and was astonished that Taylin had had lunch with a girl who hadn’t been nice to her. He was even more surprised to learn that it was Taylin who prompted the peace offering. Taylin had noticed the girl was sitting by herself. “Nobody should have lunch alone,” Taylin told her dad.

Mom and dad were cheering her on in a track and field race when they noticed Taylin, who was way out in front, slowing down. Taylin turned and started shouting words of encouragement to her friend in distant second, and then let the friend pass her so the friend, too, could experience the thrill of crossing the finish line first.

Such camaraderie is what makes the Evergreen class at South Delta senior secondary so special. “We just start laughing for no reason,” Taylin says, laughing at the thought of all that laughter.

However, the family does not make light of how Taylin’s challenges have affected them.

Because of brain damage, Taylin has difficulties with such things as short-term memory, executive planning and spatial awareness. “For example,” says her nomination by the B.C. Children’s Hospital Foundation, “asking Taylin to go get her shirt from her room is difficult for her, as she cannot put a picture in her head as to what she needs to do.”

As well as having a one-on-one educational assistant, Taylin’s family spends a lot of time teaching her skills to manage her challenges. For instance, her mom broke down a day’s to-do list into simple, individual tasks, which she printed on popsicle sticks. Taylin took a stick from the jar, did the task and then put the popsicle stick into the “done” jar. A lack of fine motor coordination requires someone to help her with many of those tasks, but it’s turned into a fun time together.

Since Taylin gets lost easily and can’t take a bus on her own — she’d forget her stop and could easily be taken advantage of — the McGills carefully coordinate each day. They want Taylin to be as independent as possible while also recognizing the dangers.

“Trust me, it scares the heck out of us,” Erin says, who regularly gets anxiety attacks, “but you just push through it.”

Luckily, Sean and Erin, who have been together since high school, keep each other in balance.

“Erin is more emotional in the time,” Sean says, “and lets things out. When things are going sideways it doesn’t bother me, and I get almost stronger and don’t need much sleep and feel positive. Then six months later when things are good and Erin’s fine, I feel all whacked out and terrible and anxious. I realize it’s because I’ve had everything bottled up. I can feel the layers unwinding and that doesn’t feel good.”

They’ve done everything in their power to always be cheerful in Taylin’s presence. They’ve also tried to keep life as normal as possible for both daughters. At an early age, Kheya accepted the extraordinary responsibilities of being an older sister to someone with special needs. When Kheya was five, she revealed to a child psychologist that she wanted her parents to have another baby; she worried she couldn’t take care of Taylin by herself should something happen to her parents and thought a sibling would help.

“Kheya came out of the womb mature and thoughtful,” says her mother who, like Kheya, is an empath, almost to their detriment during the tough times. Kheya’s now in her second year of kinesiology at UBC, focusing on becoming a doctor, and fully expects and wants to one day assume her parents’ role of keeping Taylin safe and happy.

“Taylin and I have a pact,” Kheya says. “When we grow up, Taylin gets to live with me. She gets sushi once a week, Maui ribs twice a month and in return she takes care of my kids.”

They’ve been buoyed by their close-knit families, their faith and the support of friends, neighbours and co-workers — Erin is a part-time Grade 4 teacher, Sean is Delta’s city manager — who, unbidden, always step in to ease the demands of family life. As for B.C. Children’s Hospital, the family agrees with Taylin’s assessment that “it’s the greatest place ever.”

The McGills know there are challenges ahead. Taylin’s seizures are once again more frequent, setting off Erin’s intuition that something is wrong. It could be a blockage in one of Taylin’s shunts, which will require the family to buttress their strength to undergo another brain surgery.

But as they face down whatever is to come, they too will find strength from Taylin’s upcoming Courage To Come Back speech.

“I have a motto,” Taylin says. It’s the words on the necklace her parents gave her. With a smile, the teen repeats its mantra. “Never give up.”