20 cm of snow expected as Vancouver struggles with winter's return

The more snow, the more delays with everything from transit to garbage collection
Feb 23, 2018 4:36 PM By: Courier Staff 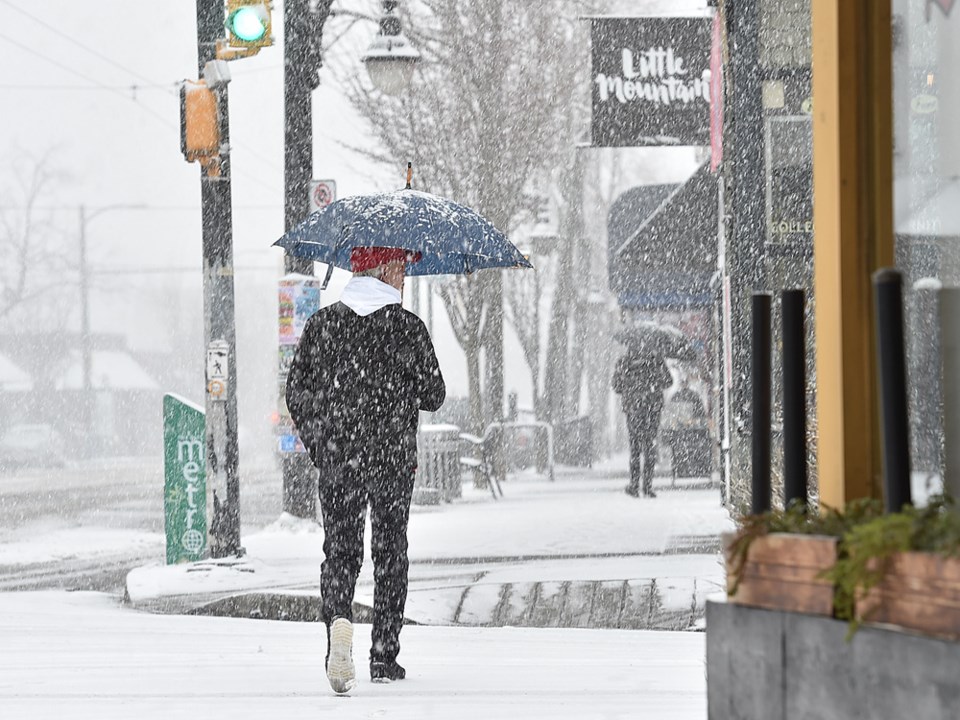 The forecasted snow hit Metro Vancouver Friday and as the flakes accumulated so did the delays — everything from flights to transit, to even garbage collection.

An alert sent out through the City of Vancouver’s VanCollect app Friday advised users that green bin collection could be delayed due to ice and snow. The message asks residents to still leave bins out for collection as crews will be returning to missed areas.

With the flakes continuing to fly throughout the day, drivers were being urged to be extra cautious while transit users were experiencing delays and long lineups, some flights out of YVR were delayed or cancelled.

Vancouver police spokesman Const. Jason Doucette said officers were responding to a higher than normal volume of calls for collisions and advised drivers to make sure vehicles are equipped with proper tires before heading out on the road.

“Know your limitations,” he said.

Doucette added that anyone involved in a collision that cannot move their vehicle off the road should not stay in the vehicle, in case there is a subsequent crash when another vehicle comes along.

“Get yourself to a place of safety,” he said.

Environment Canada issued a snowfall warning for the South Coast with between 10 and 20 centimetres expected.

“Persons in or near this area should be on the lookout for adverse weather conditions and take necessary safety precautions,” the warning reads.

“For the last week, we have been out to bring the streets in advance of snow flurries and to help reduce ice caused by freezing weather,” Taryn Scollard, director of streets for the city, said in a press release. “When we see weather reports such as what is anticipated this weekend, we also pull crews from other departments, such a water and sewer construction crews, to help support salting and snow removal at sidewalk and bus stops. We have been active over the past week to salt high-risk areas.”

After last winter, city council approved capital investments to purchase additional equipment including expanding the city’s fleet of vehicles that are adaptable for use in all seasons, allowing better access to laneways for garbage and green bin collection. Vancouver also upgraded its salt and brine storage capacity.

The city’s warming centres, which have been open since Feb. 18, will continue to be open as long as temperatures reach -5C or below, or it feels like -5C or colder.

“Warming centres accommodate everyone in need of a warm space, a welcoming presence and something warm to eat or drink,” Ethel Whitty, director of homeless services, said in a press release. “They’re an important way for us to make sure that some of the most vulnerable residents in the city are able to keep safe and warm during these extreme temperatures.”

All warming centres are open to men, women, pets, bikes and carts. Hot beverages and snacks are available and no reservations are required.