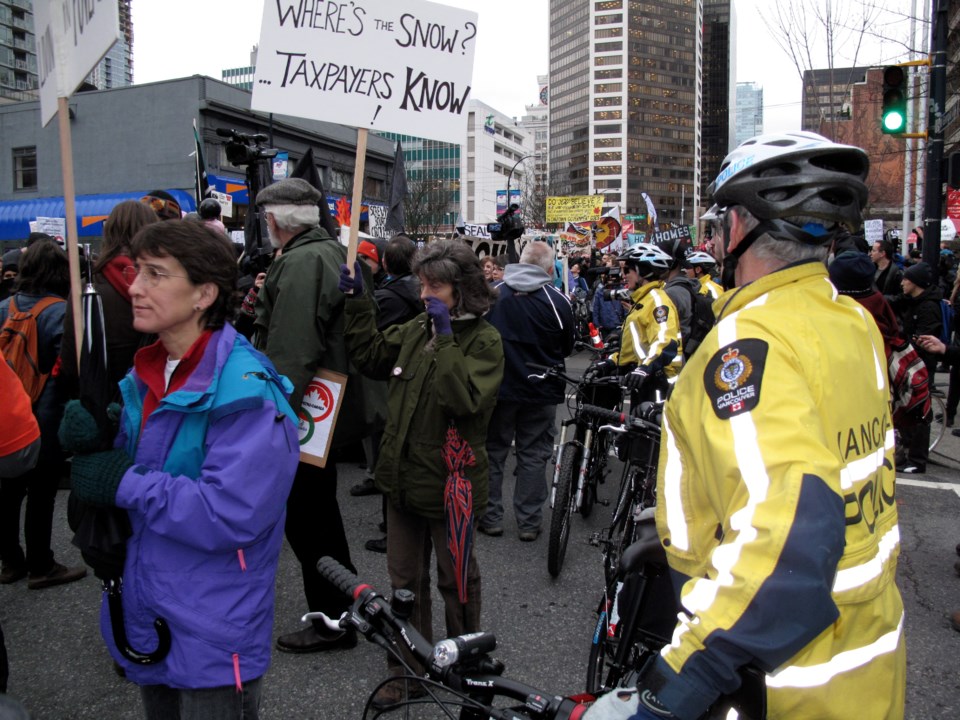 VPD ofﬁcers clashed with protesters on the opening night of the Olympics. Photo Mike Howell

A total of four complaints from the public have been lodged against police ofﬁcers working in Vancouver during the 2010 Winter Olympic Games.

Three were lodged against the RCMP and one against the Vancouver Police Department since the Games began Feb. 12. None of the complaints involved police using excessive force, as many Olympic watchdog groups worried would happen.

“I’m relieved to hear that, and certainly we’ve been relieved to see that the worst excesses we were worried about haven’t come to pass,” said David Eby, executive director of the B.C. Civil Liberties Association. “We think that they’ve been remarkably restrained.” The Commission for Complaints

“We were prepared for more [complaints],” said Kate McDerby of the RCMP complaints commission. “But it’s just one of those things we don’t know because without the information from people planning to engage with police — let alone the incidental instances — it was really difﬁcult to tell.”

VPD ofﬁcers clashed with protesters on the opening night of the Games and the next morning when vandals smashed store windows, damaged cars and overturned newspaper boxes. Police were spat on, assaulted with trafﬁc pylons and sticks and had vinegar and condoms ﬁlled with paint thrown at them. As of Wednesday, the only complaint against the VPD involved a woman upset with an ofﬁcer posted to the Canadian Mint.

The ofﬁcer asked the woman and her family to leave the Mint because it was closing for the day, according to Const. Lindsey Houghton of the VPD.

“It should be of no surprise to anyone that we have very professional ofﬁcers who take their jobs seriously and really enjoy what they’re doing,” he said, noting VPD ofﬁcers have had “hundreds of thousands” of positive interactions with the public since the Games began.

Some 6,000 ofﬁcers from 118 departments in Canada comprise the 2010 Integrated Security Unit. The majority are RCMP ofﬁcers working at Olympic venues. The VPD, which has senior ofﬁcers working as commanders at venues, is responsible for policing the protests and criminal investigations.

Though no public complaints were lodged against police for excessive force, seven ISU ofﬁcers have been relieved of their Olympic duties. Three of the seven ofﬁcers are facing criminal investigations.

The VPD is investigating two of the ofﬁcers but will not give details. A third ofﬁcer, RCMP Staff Sgt. Suzanne Denise Marie Martel, has been charged with theft under $5,000. Martel allegedly shoplifted from a retail store in Burnaby while she was off duty.

Sgt. Rich Graydon of the ISU would only say the four other ofﬁcers relieved of their duties were let go for disciplinary reasons.

The B.C. Ofﬁce of the Police Complaint Commissioner is following up on an incident involving an ofﬁcer residing aboard the ship designated for ISU members. Deputy complaint commissioner Bruce Brown said a chamber maid discovered an ofﬁcer’s gun unlocked in his room while the ofﬁcer was having breakfast in another part of the ship.