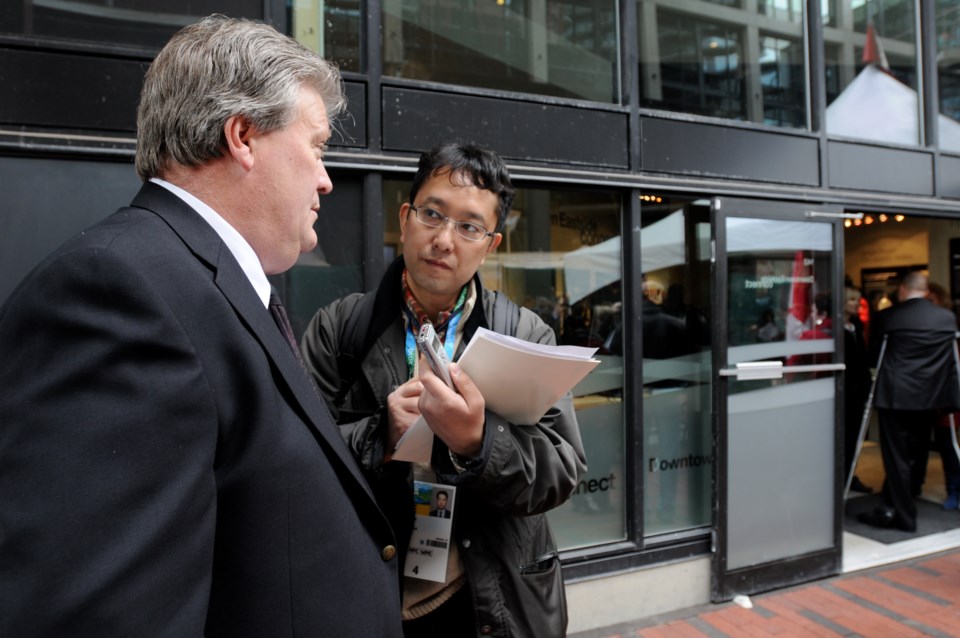 Security will be tight, media cameras will be rolling and many spectators will leave the big show with a serious case of Olympic fever.

For some, it will last the month-and-a-half that the Games and Paralympics are in full swing.

Others, as polls have indicated and a mass protest downtown today will show, couldn’t care less about the $2.6 billion event that will be viewed on television by up to three billion people worldwide.

So, will it all be worth it?

That question may never get an objective answer in a city where 48,651 people voted Feb. 22, 2003 in a plebiscite against hosting the Games.

At the crux of the “no” side campaigns was the argument that money spent on the Olympics would be better funnelled into health care, education and housing.

Since the plebiscite, and Vancouver being awarded the Games in July 2003, the campaign that has most consumed the city is the need for housing.

The need was recognized in 2005 when all three levels of government and the 2010 Vancouver organizing committee pledged to ensure the Games creates “direct benefits and minimizes adverse impacts” for Vancouver’s inner-city communities.

Key among the commitments in the signing of the 2005 Inner-city Inclusive Commitment Statement was to “provide an affordable housing legacy and start planning now.”

That was five years ago.

The common number agreed to by city politicians and social service providers is that 1,600 people are homeless today in Vancouver.

Which begs the question: How exactly will a two-week sporting event ensure there is a housing legacy?

Housing Minister Rich Coleman doesn’t believe it’s a fair question. For him, the Olympics has nothing to do with the provincial government’s housing plan.

“We’re not driven by anything to do with the Olympics,” Coleman said. “It’s a two-week event. For anybody who thinks for a two-week event that you decide to plan your housing strategy, well they’re dreaming in Technicolor.”

The provincial government embarked on its housing plan in 2006 and will continue to fund more housing beyond 2010, Coleman said.

In March 2007, a committee comprised mainly of activists, community centre directors and housing advocates — known as the Inner-city Inclusive Housing Table — recommended 3,200 housing units be built over the next four years in Vancouver.

Coleman said the government has already surpassed that number in projects completed or on the go.

He pointed to the government’s purchase and renovation of 24 single-room occupancy hotels in Vancouver and providing money for the construction of six social housing sites in the city. Another eight sites will be funded in the coming years, Coleman promised.

He noted all the buildings will or already have social service providers that cater to tenants’ various needs, including addiction counselling and medical care.

At a sod-turning event at 17th and Dunbar last month to announce funding for the city’s sixth site, Coleman reminded the crowd that Vancouver isn’t the only city with a homeless problem.

The provincial government has funded social housing projects across the province, including Surrey, Langley, Nanaimo and Victoria.

“There’s about another 2,000 to 3,000 [housing] units elsewhere in British Columbia that are actually addressing this problem,” Coleman said. “What happens is that everybody sort of gets in their own little world and they don’t look at the bigger picture and understand that the picture is bigger.”

But say what he will about the Olympics not being tied to homelessness, the minister acknowledges the connection is being made by visiting journalists.

That’s why B.C. Housing opened a small office Feb. 1 in the courtyard of the Woodward’s complex for the month of February. Critics such as the Carnegie Community Action Project, which organized a protest outside the office last week, refer to it as “the ministry of propaganda.”

Jean Swanson of the Carnegie group disputed Coleman’s claims that the government is on track to build 3,200 housing units.

Swanson’s research indicates that funding has only been approved for 588 new units of self-contained housing in Vancouver over the last four years.

“The provincial government could do a lot more,” she said, standing outside the government’s office at Woodward’s. “It has a $250 million housing endowment fund sitting in the bank in Victoria that would build over 1,200 units of housing.”

Coleman, who dismissed Swanson’s statistics, said the office serves as an information booth for journalists who have questions about what the B.C. government is doing to end homelessness.

“We’re actually going to celebrate what we’re doing on housing and we’ll show jurisdictions around the world how much they can learn from us,” said Coleman, who was interviewed by a Japanese journalist on the opening day of the office. “If journalists want to talk to me or visit me, I’ll do it. But at the same time, they may want to go get more information [on the government’s housing plan] and we felt we needed a central place for them to do that. That’s all.”

To get to that office, journalists will likely have to step around a scattering of red tents emblazoned with the messages “housing is a right” and “end homelessness now.”

Inside the tents will be homeless people and activists, including John Richardson of the Pivot Legal Society, the nonprofit organization that is behind the red tents campaign.

The society has 500 tents, 200 tarps, 200 ponchos and several banners that will be distributed to the homeless and others willing to spend a night in a tent in protest.

Richardson wouldn’t reveal where people will set up their tents but promised the campaign will attract the attention of the media.

Over the years, Pivot has targeted housing campaigns at Coleman and the provincial government. But this time, Richardson said, the federal government is Pivot’s target.

Richardson’s criticism of the federal government is also one that Mayor Gregor Robertson has made in pointing out that Canada is the only G8 country that doesn’t have a national housing strategy.

“I speak to federal ministers whenever I have the chance to remind them that we need to show up as a country and ensure people are housed,” Robertson said.

Diane Finley is the federal minister responsible for housing in Canada. The Courier requested an interview with Finley but her director of communications replied instead.

In an email from Ryan Sparrow, he said the federal government will allocate $60 million over the next two years to B.C. to “improve and build new affordable housing and to help the homeless.”

To date, under the federal government’s so-called affordable housing initiative, some $130 million has been committed to B.C. for the construction of 4,300 housing units, Sparrow said.

Despite the efforts of the provincial and federal governments — which supplied the Courier with a dizzying array of statistics — the fact is 1,600 people remain homeless in the city.

Many have found space in temporary shelters that opened for the winter, including the seven city shelters, commonly referred to as the HEAT shelters. Last month, the city announced the seven shelters—which have a total of 530 spots — are at capacity.

In most cases, the shelters are in city-owned buildings and the provincial government is paying operating costs.

The federal government is not involved.

Critics have said the shelters were opened to hide the homeless from the thousands of Olympic visitors.

Vision Vancouver Coun. Kerry Jang disagrees with the criticism, saying, “We were worried about those individuals long before the Olympics was a glint in somebody’s eye.”

But with all seven shelters set to close April 30 — unless the provincial government supplies more funding — the critics’ argument stands up. “Of course we’re worried about that perception,” said Jang, who voted “no” in the 2003 plebiscite to host the Games.

“But if we were going to hide homelessness and all that, you’d think we’d be a lot quieter about it.”

Jang points to the city’s agreement with the Dunsmuir Hotel to accommodate 160 people and another 100 at the Bosman Hotel in May.

“People can draw their own conclusions,” he said. “But here’s my record. Look it up. If they don’t like it, they can vote me out.”

Last week, Jang seconded a motion at a city council meeting from the mayor that calls for the city’s homeless action plan to be revised “with clear targets for ending street homelessness by 2015.” Robertson also wants a homeless count to be conducted in Vancouver in March and an annual progress report on homelessness.

What wasn’t included in the mayor’s motion was the status of the 252 units at the Olympic Village at Southeast False Creek that were originally built for social housing.

City politicians promised the units would be a housing legacy of the Games. The units are currently housing athletes.

Council still hasn’t made a decision on whether to sell the units to recoup costs of building the expensive Village project.

That decision will be made after the Olympics.

On a recent Friday morning, the 42-year-old blade thin man with decaying teeth was puffing on a cigarette outside the city’s temporary shelter on West Fourth, near Fir Street.

He’s been staying at the shelter since it opened in January. He has a place to sleep, shower, do laundry and eat two meals per day.

“This place was big time needed in Kits — it’s like Club Med,” he said, referring to the popular tropical resort company.

O’Brien said he spent the last two-and-a-half years on the street, collecting bottles and sleeping in alleys, behind supermarkets and churches.

His story is a familiar one heard by the Courier over the years — a man works in construction, gets into an accident, bashes up his leg and ribs, painkillers aren’t enough to mask the pain, so he turns to heroin.

“Let’s just say I’m fighting an addiction and doing the best I can,” he said, adding that he’s attempting to get social assistance for his disability and a monthly rent cheque.

O’Brien said he receives $235 a month from the provincial government. He supplements his income with money he earns collecting bottles — a sum he won’t reveal.

“I’m good at it, been doing it for a long time and I’ve got regular customers. I can clean a neighbourhood of bottles like nobody else.”

Originally from Halifax, O’Brien said he is a trained welder and structural steel engineer. He helped build Toronto’s SkyDome in the 1980s, he added.

How he ended up in Vancouver is a long story, he said, and not one he wants to share with a reporter.

Ultimately, O’Brien said, he wants his own place but refuses to move into a downtown hotel.

A former resident of the Lucky Lodge in the Downtown Eastside, he said the bedbugs drove him out of the hotel. “I’m hoping to get some money from the government for a place but they really need to boost it so I don’t have to live in one of those places downtown,” he said.

He believes the shelter opened on West Fourth for one reason: “they want us off the streets during the Olympics.”

But that doesn’t bother O’Brien. In fact, if the Olympics is what it took to open a shelter, then that’s fine with him.

He also expects to make more money from collecting bottles, noting more people will be drinking and partying.

Another bonus, said the self-described “sports freak” is the shelter has a flat-screen television.

The former minor hockey player will be able to watch the men’s hockey games.

What he’ll do after the shelter closes April 30 is not on his mind.

“Who knows? Back to the streets, maybe. I don’t know, maybe I’ll find a place. Right now I’ve got to go finish my laundry.”