9 goals that Jake Virtanen was supposed to meet this summer, but didn’t

An NHL training camp is prime time for overreacting. That overreacting can come in different flavours, both positive and negative.
Sep 14, 2019 5:09 PM By: Daniel Wagner 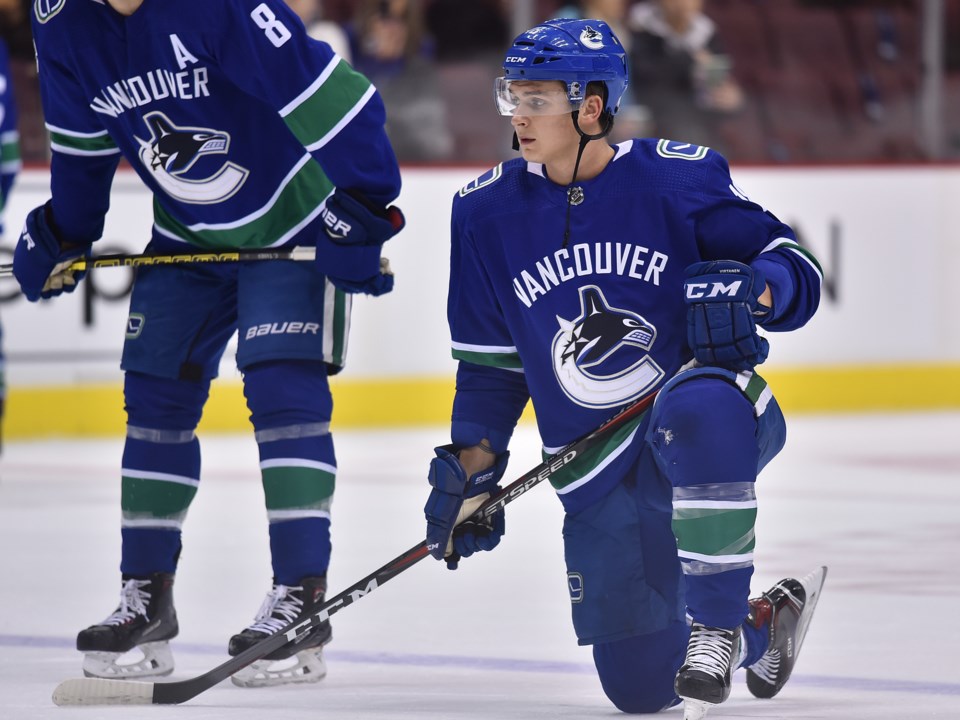 An NHL training camp is prime time for overreacting.

That overreacting can come in different flavours, both positive and negative. Fans can get over-excited about a prospect scoring a gorgeous goal in an intra-team scrimmage or a player on the edge of making the team throwing a big hit to make a statement. They can also overreact negatively when a player struggles during a drill or a skilled player is put on line rushes with fourth-liners.

When the Canucks split the players at training camp into three groups, the first and second groups were full of NHL players, top prospects, and other players that have a realistic shot of either making the team out of camp or being an early call-up from the Utica Comets.

The third group was primarily composed of AHL players, both those on two-way NHL contracts that will likely spend the whole season in Utica, and those who aren’t even signed by the Canucks but only have AHL contracts.

With that third group was Jake Virtanen.

It was a temporary demotion — Virtanen was back with the main two groups on Saturday — but it was still a strong statement from head coach Travis Green, and an intentional one.

“There are certain expectations that he wanted to reach and I wanted him to reach, and we both agreed that there were goals that had to be met, and if he didn't reach them, that he probably wouldn't be with the first two groups on the first day of camp, but there's nothing more than that. I'm not going to get into it any more than that.”

Whatever those goals were, Virtanen indicated he was “pretty close” to hitting them and was kicking himself for falling short.

“I’m frustrated at myself,” said the winger. “I think anyone would be. I mean, I was right there… So it is what it is. And like I said, I’m not going to be all pissy about it. I’m just going to work hard.”

What exactly were those goals?

It’s easy to assume that the goals were related to conditioning, particularly with the way Virtanen struggled during the day-one bag skate. When Green was asked about Virtanen on Thursday, he made some general statements about what “all our young guys” need to do to improve.

“Consistency. I find with young players, consistency is a big word. Coming into camp ready to go and putting the work in in the summer is part of making sure that you’re consistent in the season.”

At another point during Thursday’s press conference, Green stressed the importance of their fitness testing.

“You can tell right away sometimes, just by testing, where guys are at,” he said, “and we put a real emphasis on conditioning and coming into camp ready to go, not working your way into camp. Those days are over.”

So, it seems like a safe assumption that the goals Virtanen failed to meet had to do with conditioning, but let’s be clear: neither Green nor Virtanen actually said that. Not once did Green say Virtanen failed a fitness test and Virtanen didn’t say that either.

That leaves us free to speculate about what goals Green and Virtanen talked about at the end of the season and that Virtanen failed to fulfill during the summer. Sure, it probably had to do with conditioning, but if it wasn’t, it was probably one of these nine things:

1 | Read the entire Lord of the Rings trilogy. Virtanen is a big fan of the LOTR movies, making time to watch them a few times every year, but the books are a little slower-paced. Pro tip, Jake: skip the poems and the songs on your first read-through.

2 | Send everyone who posted a video of themselves shotgunning a beer on social media with the #ShotgunJake hashtag a personalized thank you note for supporting him and the team. Problem is, that turned out to be a lot of thank you cards and his hand started cramping.

3 | Hike up Mount Cheam. This gorgeous trail provides can’t-miss views of the Fraser Valley and Jake and his buddies were probably planning to make the hike all summer, but kept putting it off.

4 | Get better than Ben Hutton at Fortnite. Unfortunately, that proved to be an impossible task.

5 | Become a DJ and put together a killer playlist for the Canucks’ workouts as a replacement for Michael Del Zotto. He just never quite got that playlist hammered into shape: only Brandon Sutter appreciated the copious amounts of country and his insistence on using the 7-minute long “The Breaking of the Fellowship” from the Lord of the Rings soundtrack really killed the energy.

6 | Learn how to speak Swedish. Who knows, maybe the key to getting into the top-six and playing with Elias Pettersson is communication: literally speaking his language. Unfortunately, while Duolingo is a fun way, it requires a lot of diligence and more than just one summer to become fluent.

7 | Finally learn how to cabbage patch. Couldn’t quite get it.

8 | Build a bookshelf. He got the wood and everything, but it’s still just sitting in a pile in his garage. One day, bookshelf. One day.

9 | Do a stand-up set at an open mic. The material is ready, but it’s tough to get up on a stage in front of a bunch of people, who are mostly strangers, and entertain them with nothing more than a microphone.