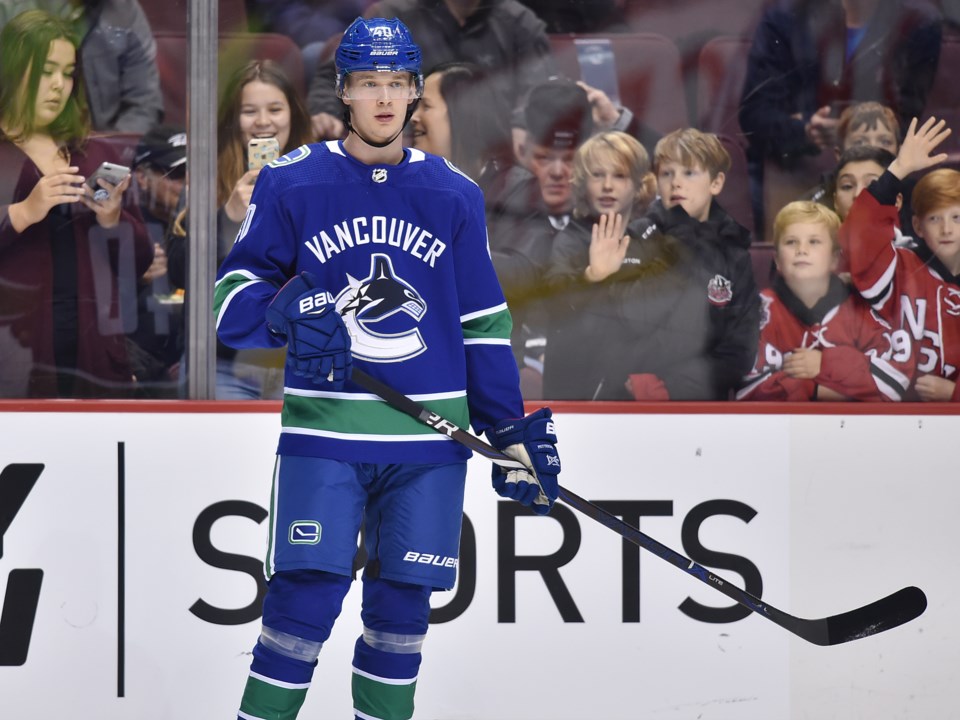 Skating was one of the few areas in which Elias Pettersson supposedly wasn’t elite when he was drafted. His skating was described as good or above average, with the highest praise being “efficient.” When he hit the NHL, however, he quickly established that he could skate with the best in the league.

Pettersson showed blazing speed at the fastest skater competition during All-Star Weekend, and was shifty and elusive with his quick changes in direction and puck control through the neutral zone and in the offensive zone. Clearly, skating is one of many areas where Pettersson refuses to simply be “above average.”

The question is, can his skating get even better?

It’s certainly possible. Improved strength and conditioning will help, certainly, and even the best skaters can make small adjustments to their technique to get even better. Canucks fans have seen the improvements Bo Horvat has made by working with skating coach Kathy McLlwain; Pettersson could similarly work with a power skating coach to refine his stride.

There’s another aspect to his skating, however, that Pettersson is paying attention to this off-season: his skates.

Professional hockey players pay close attention to the minute details of their equipment, whether it’s getting just the right flex, kick point, lie, and curve on their stick or picking the perfect gloves that provide the right mix of protection and flexibility. That extend to a player’s skates as well, from the fit of the boot around the foot to how the blade is sharpened.

A profile is described as a radius in feet. Think of the blade itself as a small portion of a very large circle. A standard profile for a hockey skate is 13’: the blade has the curve of a circle with a 13-foot radius.

Different profiles affect how much of the skate blade is in contact with the ice at any one time. The bigger the radius, the more blade is touching the ice. A bigger radius provides more stability, while a smaller radius can provide quicker changes in direction. Figure skaters use a much smaller radius — typically 7’ to 9’ — than a hockey player for this reason.

Over the years, however, skate profiles have become more complex. Instead of just a single radius, players use skates with combinations of radiuses. This can be a combination of two radiuses — a smaller radius towards the front of the blade for quicker acceleration and a bigger radius on the back of the blade for better balance and speed — but doesn’t stop there. Skate profiles can be a combination of three radiuses or even four radiuses to provide small improvements in acceleration, agility, speed, and balance.

In a promotional video for ProSharp, a Swedish skate sharpening company, Elias Pettersson tested out a few different skate profiles while practicing with Timra IK, his Allsvenskan team from his draft year. His friend and former Canucks prospect Jonathan Dahlen can be spotted chatting with Pettersson at the 1:07 mark of the video. Dahlen is returning to Sweden to play for Timra next season.

“I’ve been skating on the Detroit 2 profile for some years now,” said Pettersson. “Always thought it felt good.”

That’s a surprise, as the Detroit 2 profile isn’t the typical choice for a slick offensive player like Pettersson. In fact, it’s a common profile for goaltenders.

Pettersson isn’t exactly a heavy defensive player (or a goalie), so making a change in profile could make a significant difference to his skating. When asked why he was testing out different profiles, Pettersson said, “I feel that I need more grip in the tight turns. Sometimes I lose the grip in those tight turns.”

After trying “6-7 different profiles,” Pettersson landed on the Quad Zero, a profile that combines four different radiuses along the blade: 6’ up front for acceleration, 9’ behind that for better mobility in turns, then 11’ for speed, and finally 13’ at the back for stability. It's a profile designed for "elusive" skilled players, so it's right up Pettersson's alley.

“I liked the Quad Zero the best,” said Pettersson, and when asked if he will use it in the upcoming season, he smiled and then laughed. “It’s going to be a switch. It will be a switch today already.”

Is this going to completely change the way Pettersson skates? Of course not, but it could provide small improvements in key areas, and those small improvements can make a big difference for a player like Pettersson that can take advantage of even the smallest gaps on the ice. If he can get better grip in tight turns without losing any straight-ahead speed, Pettersson could become even more of a nightmare for defencemen to deal with one-on-one.

Considering he’s switching from a profile designed for defence and goaltending, it could make more of a difference than you might expect.