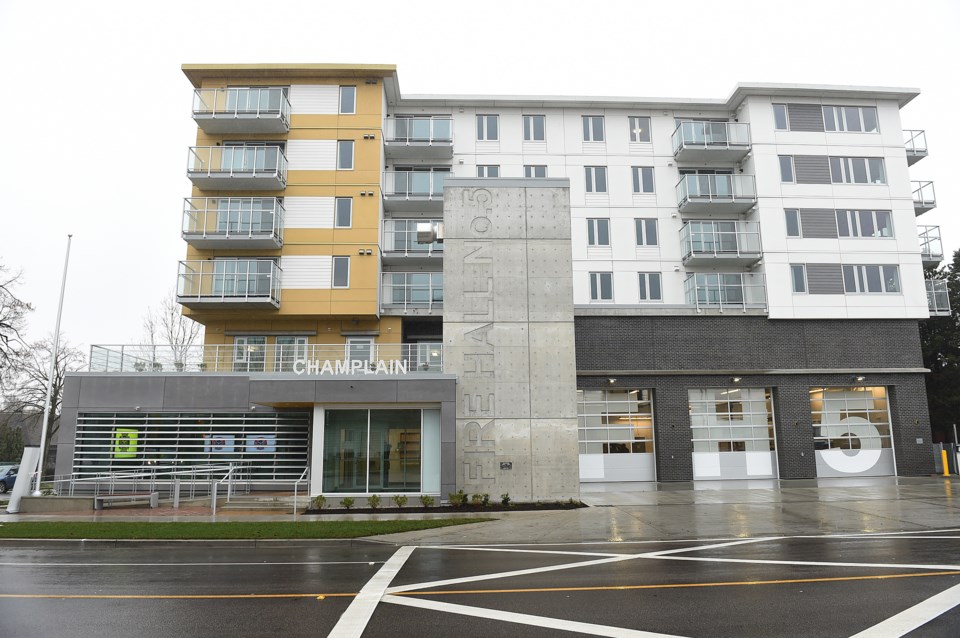 The project — a four-storey, 31-unit housing complex over Firehall No. 5's two-storey replacement building — was years in the making, involving the City of Vancouver, Vancouver Fire and Rescue Services and YWCA Metro Vancouver. Photo Dan Toulgoet

As the holidays approach, Andrea, 34, is feeling relief.

Late last week, the single mom of a 13-month-old daughter, moved into a two-bedroom apartment in Pacific Spirit Terrace at Kerr and East 54th Avenue. The apartment is in what’s believed to be the first social housing complex built above a newly constructed firehall.

For Andrea, who didn’t want to reveal her last name, it represents secure, affordable housing that she can live in for the longterm.

She said she’s had difficulty getting child support, which has made finding affordable housing in this market challenging.

When she realized the YWCA had selected her application for an apartment at Pacific Spirit Terrace, she cried “tears of joy.”

“I’m so grateful for this life-changing opportunity. Because of this type of affordable housing, I’m able to celebrate something more than just four walls this Christmas. I can celebrate a plethora of memories I’m going to make here with my little girl. Memories like watching my daughter tiptoe her way out of her own bedroom each morning and baking cookies with her for the first time or watching her face light up when she sees the crumbs leftover from Santa’s plate on Christmas morning. Because of Pacific Spirit Terrace, I can actually see our future without a dark cloud looming over it.”

The project — a four-storey, 31-unit housing complex over Firehall No. 5's two-storey replacement building — was years in the making, involving the City of Vancouver, Vancouver Fire and Rescue Services and YWCA Metro Vancouver.

The city kicked in almost $11 million to replace the firehall, as well as $6.66 million towards the housing portion of the building, while the YWCA fundraised the remaining $4.71 million for Pacific Spirit Terrace. The total project cost was $22.37 million.

Mayor Kennedy Stewart called the project “innovative” and said it’s an example of what governments and non-profits can do together to address the housing crisis.

“We’re taking city-owned land and transforming it, not only into a much-needed firehall, which we’re [standing] in right now, but also 31 safe, new homes for dozens of women and children,” he said.

“Now think about that. Firehalls have long been a symbol of safety and protection in our communities. Now this firehall will be that same symbol but in a very different way.”

Pacific Spirit Terrace — named after one of the major donors, Pacific Spirit Foundation — features 28 two-bedroom and three three-bedroom units, which rent for between $520 and $1,160 per month. Rents for 15 of the units are for people on income assistance — most will pay no more than $570, while another 16 of the units have rents based on Housing Income Limit (HILs) rates for households earning between $35,000 and $73,500. Most of the women moving in will fall into the lower range.

Women leaving abusive partners are being prioritized for units. The complex includes an art and play therapy room for children who’ve witnessed violence in their homes. The building also has an amenity room and a rooftop balcony. Staff will be on hand from 9 to 5 during the week to provide residents with information or referrals and to organize tenant events.

Noise abatement measures were incorporated into the construction of the building and, when there’s no traffic, fire trucks won’t use sirens until they’re two blocks away.

While a few tenants have started to move in, it’s not expected to be full until the end of December.

Firefighters, meanwhile, are expected to take occupancy of the new Firehall No. 5 on Dec. 12.

It features office space, a kitchen, a fitness room, a community and training room, as well as private dorms. There will be four shifts of four staff at a time.

Nods to the past are in various forms throughout the firehall. In the kitchen, there's a wooden table that a firefighter made out of a workbench from the old firehall. Historic images can be found in places such as a stairwell where one commemorates a Sept. 14, 1945 fire at the McMaster building at Homer and Helmcken prior to the building’s collapse. The incident claimed the lives of three firefighters.

“I think we're going to actually develop something really meaningful and special. I can tell you that the rest of the Canadian fire services [will be] looking at this innovation in the city of Vancouver and what we have achieved."

YWCA CEO Deb Bryant noted that finding affordable housing in the city is difficult for most people, but especially for single mothers.

It’s the second mixed-use complex the YWCA has worked on in Vancouver — it also has four floors of social housing called Cause We Care House above the Strathcona library branch known as nə́c̓aʔmat ct.

“No mom should ever have to choose between paying rent or buying the necessities of life,” she said. “At the YWCA, that’s what we’re committed to doing — to seeing women and their families thrive and having a safe and affordable place to call home.”

Andrea said she’s just happy not to be stressed about housing or to have to move far away from Vancouver and her job in the city.

“I don't have to worry about being able to get my daughter what she needs, I can do everything for her now,” she said, while tearing up after the ceremony.