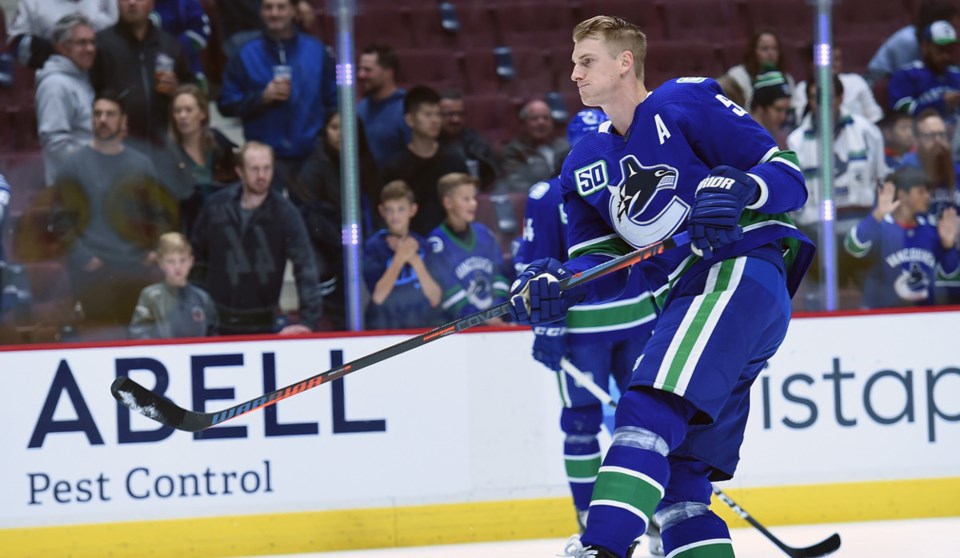 The Canucks subreddit is a perfectly cromulent community of Canucks fans. It’s a great place to discuss Canucks news, celebrate after a win, commiserate after a loss, and post the dankest of memes about Loui Eriksson’s facial expressions.

And sometimes it’s a place where you can find the most unhinged works of disturbed genius.

The latter is the case for a Reddit thread posted Wednesday to r/Canucks by a user that goes by the sobriquet of “AdmiralFartmore.” According to Mr. Fartmore, he was “in the tub” thinking about the Canucks’ dreadful 9-2 loss to the Lightning when something his father once said came to mind: “If you want to succeed, you need to have a lot of skin in the game.”

Perhaps u/AdmiralFartmore would say to me, “Please, Mr. Fartmore was my father; call me Admiral.” But I digress.

The phrase “skin in the game” was popularized by Warren Buffett and is intended as a metaphor: in order to be successful, whether in finance or other realms, you need to be heavily invested, to the point that you incur risk. If you don’t have “skin in the game,” if you’re not risking something, you’ll never be rewarded; unlike Brandon Flowers, you’ll never be The Man.

Fartmore took this in an entirely different direction, interpreting the phrase entirely literally. In order for the Canucks to win, in this view, they need to have a lot of skin in the game — literal skin.

He did so by using the publicly available height and weight of every player and used the Mosteller formula — a real formula used in medical practice — to estimate the Body Surface Area (BSA) of each player, then combined the measurements of individual players to find the amount of skin on every team in the NHL.

Tyler Myers comes in with the most skin, as you might expect as the second-tallest player in the NHL, but the hefty Jake Virtanen is a close second. At the other end of the skin spectrum are Elias Pettersson, Troy Stecher, and Quinn Hughes.

Yes, this is all super weird, bringing to mind Buffalo Bill, particularly when he breaks down how that the difference in skin between Myers and Hughes is "enough skin to cover the average 10-month old toddler or that the total skin of the Canucks — 47.8 square meters — is “just enough to make one tandem parachute.”

On the other hand, as someone who spent hours this summer figuring out the weight of every single team name in the NHL, including some extra time in the comments calculating the weight of the “wild” in the logo for the Minnesota Wild*, it’s hard to avoid feeling like Fartmore is a part of my tribe. A really messed up part.

The entire thread is worth reading, but the essential conclusion is that “skin in the game” has only a mild correlation with success, as measured by comparing BSA to Stanley Cup odds. It's not enough to just have a lot of skin; you need a lot of skill within that skin.

As silly as it seems, however, there may actually be some practical value to using skin — or BSA, if you want to sound less like a serial killer — to measure the size of a team.

“As measuring BSA incorporates both height and weight,” said Fartmore, “it may be more effective than discussing the two attributes separately when discussing size of NHL teams. At least, it should be used in conjunction with the two.”

There are plenty of outliers too: Quinn Hughes has the least skin on the Canucks due to his combination of size and weight, but certainly plays bigger than his skin, which is probably the oddest thing ever written about Quinn Hughes. In any case, remember to vote Quinn and his skin into the NHL All-Star Game.