According to Wayne Gretzky, Elias Pettersson is like Michael Jordan 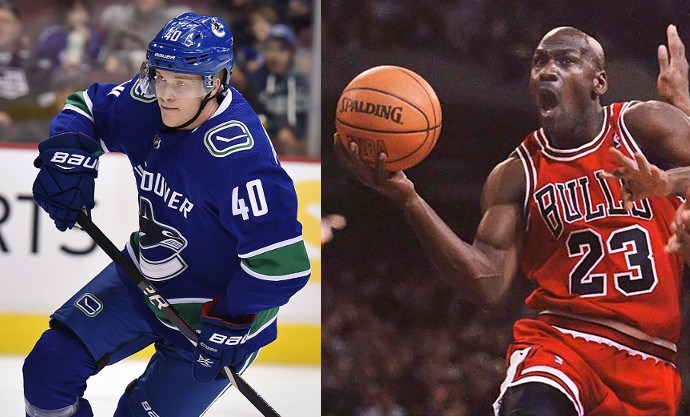 Ten games into his season, Pettersson had ten goals, putting him on-pace to tie Teemu Selanne’s rookie goalscoring record. His style of play had some comparing Petterson to Pavel Datsyuk, one of the best two-way forwards of all time. His statistical accomplishments drew comparisons to Sidney Crosby, Evgeni Malkin, and Alexander Ovechkin. Wayne Gretzky, the Great One himself, even drew a comparison between himself and Pettersson.

The latest comparison from Gretzky, however, crosses sports boundaries to the greatest of all time in another sport: basketball. He compared Pettersson to his old ProStars teammate, Michael Jordan.

In an interview with Swedish newspaper Expressen, Gretzky was asked about Pettersson and again compared Pettersson to himself, before moving on to the Jordan comparison. Here are his comments via a translation provided on Reddit by Redditor balderismo.

“That young man in Vancouver has really impressed me,” said Gretzky. “We always compare athletes with each other and if there's anyone who reminds me of myself, it is Elias Pettersson. For several reasons. Firstly, he may not be the best skater or has the hardest shot, and he is not the physically biggest player on the ice but he sees the ice so well. And he has a great understanding of the game.

“But the most important thing is his work ethic. If he loses the puck he immediately tries to win it back. Many young players make an extra turn and take some time to do so, but not Elias. He's right there and is fighting to get the puck back again.”

Another look at that 99.4 mph from Petey. pic.twitter.com/TpUeFixlgb

Gretzky admitted that immediately after, saying, “When it comes to his shot, it's harder than people think. I've seen him score this season, and I tell myself: ‘Wow, that was a really hard shot.’”

In other words, since Gretzky believes Pettersson sees the ice and works like he did, but is a better skater and has a harder shot, obviously Pettersson is going to be a better player than Gretzky, right?

Okay, okay, let’s not get carried away. While it’s neat seeing Gretzky compare Pettersson to himself, particularly in the way he understands the game, there’s just no way that Pettersson can dominate the league the way Gretzky did. The league as a whole has improved immensely, particularly when it comes to defencemen and goaltenders, but also at forward, where Pettersson still has a way to go to reach the heights of the elite scorers.

Gretzky went on to point out the importance of Pettersson to Vancouver with the Sedins retiring. His emergence this past season means fans “can already see the light at the end of the tunnel,” he said.

The comparison to Michael Jordan came when he was asked if Pettersson is a “franchise player.”

“Oh, absolutely. He's like Michael Jordan when he came to the Chicago Bulls,” said Gretzky. “Jordan went third in the NBA draft and Elias wasn't drafted as number one either. Things like that happen and sometimes it happens for reasons that we cannot foresee, but this guy is a franchise player.”

Ah, so not a direct comparison of Pettersson’s athletic abilities, but a comparison to Jordan’s ability to be a franchise player despite not being a first overall pick.

The fact that Jordan wasn’t the first overall pick is somewhat bizarre. Jordan was a legend at the University of North Carolina, so it wasn’t like he was an unknown or playing in a lesser league, as Pettersson was. Hakeem Olajuwon went first overall to the Houston Rockets, which worked out pretty well for the Rockets, who won two NBA championships with Olajuwon as the MVP both years.

At second overall, however, the Portland Trail Blazers made the mistake of picking Sam Bowie ahead of Jordan, as they already had Clyde Drexler at Jordan’s position. Bowie had injury trouble (which he lied about prior to the draft) that limited his NBA career.

Jordan, of course, went on to tremendous success, as we’re all well aware. You have to wonder if being the third overall pick fueled him, the same way getting cut from his varsity high school team helped fuel him. In a similar way, Pettersson has been fueled by those who question him because of his size. Like Jordan, Pettersson is a fierce competitor that loves to prove people wrong, which is the source of some of the "prickliness" that's shown up in interviews with the media.

“I love to see how he gives everything in all situations,” said Gretzky. “He is extremely competitive. He works so hard and he's unselfish. It's fun to watch him play. I sit there at home in front of the TV and just hope that he'll get that fourth, fifth or sixth point in the game. It's good for hockey, that's how I see it."

Now let’s see if Pettersson follows in his footsteps with six championships. Of course, in order to do that, he might need the equivalent of Scottie Pippen on his side.

And maybe he can film a Space Jam sequel on ice at some point. Just as long as he doesn’t retire at 30 to take up baseball.