Adam Palmer will be VPD chief until 2023

The Vancouver Police Board extended the chief's contract to keep him on the job for eight years
May 30, 2018 2:05 PM By: Mike Howell 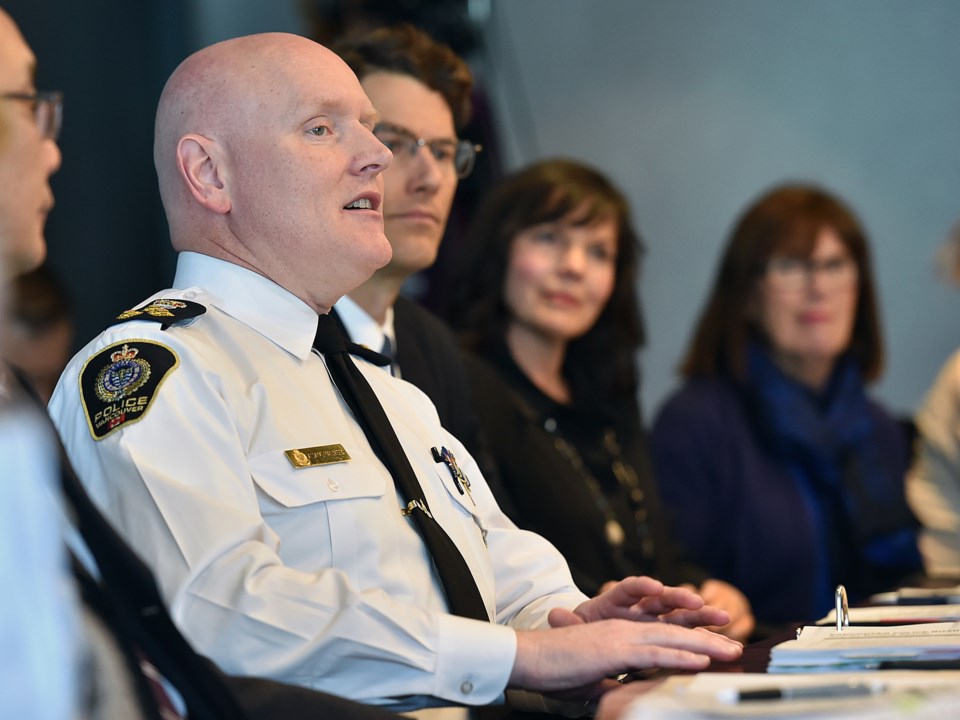 Police Chief Adam Palmer will have served eight years as chief when he retires in May 2023. Photo Dan Toulgoet

The Vancouver Police Board has given Police Chief Adam Palmer an extension on his contract that will see him lead the 1,300-member department until May 2023.

Mayor Gregor Robertson, who doubles as chairperson of the police board, said Palmer had exceeded expectations in all areas of his job since being sworn in as chief in May 2015.

"He's really excelled in his early years as chief," said Robertson, pointing to a drop in the overall crime rate and Palmer's "caring and compassionate approach in the community and within the department."

Palmer, 54, was given a five-year contract when he took over for retiring chief Jim Chu. The board decided last week to add another three years to the contract, meaning Palmer will have been at the helm for eight years when he retires.

The nine-member police board conducts an annual performance review of the chief. The board bases the chief's performance on areas such as the crime rate, strategic planning, employee satisfaction, public confidence and relationships with various groups in the community and senior levels of government.

Leadership, communication and financial management are other criteria that is examined, said Robertson, who worked with former chief Jim Chu and had equally good reviews of his performance as leader of the department.

"We've been lucky with both Jim and Adam—both outstanding chiefs," the mayor said. "Jim was a good mentor for Adam, and Adam's been able to take work by previous leadership to the next level."

That next level has included a new five-year strategic plan and an operational review of the department that will see the hiring of 120 officers and 52 civilians over the next five years.

The use of technology to forecast where property crime could occur and the chief's continued call for treatment on demand and options for drug users were other initiatives Robertson pointed to in his assessment of Palmer.

"It's hard to find weaknesses, he's been so strong on many fronts," the mayor said. "And anytime there's a gap or a mistake, he's all over it and I think Vancouver is very lucky to have Adam Palmer as police chief."

Though Palmer is in charge of the department, he made it clear in an interview with the Courier that his success has come as a result of a good team of people around him and continued hard work of his police force.

Fighting crime is an obvious measurement of a chief's success or failure, but Palmer pointed out that about three-quarters of calls responded to by his officers don't involve crime.

Missing children and adults, traffic accidents, landlord-tenant disputes, people in distress and suicides were examples he provided of those calls.

While ensuring his department continues to drive down crime is central to his role as chief, Palmer said a big part of his job is working with various community groups, health officials, other police forces, politicians and bureaucrats at all levels of government to make for a safer city.

A lot of his attention, too, has been spent focused on the wellbeing of his officers, he said, noting programs are in place to ensure officers are getting the counseling and treatment they need.

Mandatory debriefings on critical incidents are now a normal part of the job, said Palmer, who also continues to look for ways to improve the morale of his officers.

The VPD conducts an employee satisfaction survey every two years. A survey conducted in 2016 showed a 66 per cent overall satisfaction rate among those polled at the department. It was 59 per cent in 2014.

Palmer said he expects the department's focus on employee wellness will see an uptick in overall satisfaction in this year's survey, adding that he takes the feedback seriously and personally.

"I spend a lot of time—and put in extra time—making sure I'm connected with my frontline members and that I'm talking to people," the chief said. "When officers are going through tough times—if they've been assaulted or injured or if they've got issues that they're dealing with on a personal nature—I always make a point of reaching out to them and letting them know I'm here and I care about them, and I listen to their ideas."

He said his worst day as chief was in November 2016 when one of his officers almost died in an incident outside a Canadian Tire store on Grandview Highway while attempting to arrest a gun-toting suspect.

The officer was stabbed multiple times before the suspect was shot and killed in what police said was a botched robbery. That incident and the killing in January of innocent victim Alfred Wong, 15, of Coquitlam at Broadway and Ontario also resonated with the chief.

The Canadian Tire case generated headlines in March 2017 after the Independent Investigations Office launched legal action against the chief and some of his officers in an effort to compel officers to be interviewed.

That case is still before the courts. Legal action was launched under an interim director of the investigations office, which is now run by Ronald MacDonald, whom the chief said he has a good working relationship.

"They'll be times, of course, where we'll have disagreements but I would say he's a very practical guy to work with—common sense—and I enjoy working with him," Palmer said.

Palmer's contract extension comes less than six months before Vancouver's civic election. With Robertson retiring at the end of this term, Palmer will soon be working with a new mayor as chairperson of the police board.

The chief said he's been following the news related to various civic campaigns, realizing not only will the city get a new mayor but see many new city councillors elected.

While the mayor and the board have no say on how the chief runs the operations of the department, they do set policy and handle complaints from the public. A new mayor will also undoubtedly have an influence on whether the VPD's future budget requests are warranted.

"It's always extremely important for the chief of police to make sure that they have a great working relationship with the mayor and city manager and city staff," he said. "So many things that we're involved in connect with various city projects. That relationship is crucial."

Added Palmer: "I would say that no matter who the mayor is, I'm comfortable working with anybody. I work with people from all different backgrounds and political stripes, so whatever [person] is fortunate enough to get that position, I'll work fine with them."