After one season without a captain, will that change for the 2019-20 Canucks?

The Canucks have had 13 captains in their history, starting with Orland Kurtenbach in their inaugural season. The veteran Kurtenbach led the Canucks in their first four seasons before retiring.
Sep 6, 2019 4:17 PM By: Daniel Wagner 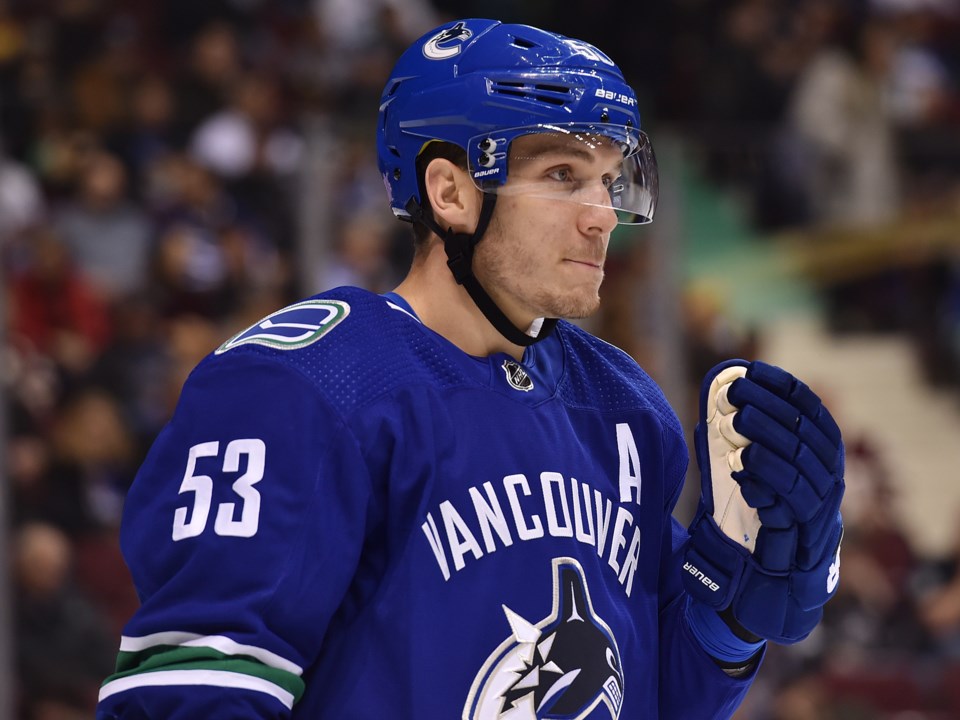 Bo Horvat was an alternate captain for the Canucks during the 2018-19 season.Dan Toulgoet / Vancouver Courier

The Canucks have had 13 captains in their history, starting with Orland Kurtenbach in their inaugural season. The veteran Kurtenbach led the Canucks in their first four seasons before retiring.

After Kurtenbach retired, however, the Canucks chose to go captain-less for the 1974-5 season. Perhaps it was because they didn’t have a clear candidate: over the next seven years, the team would cycle through four captains before Stan Smyl took on the role.

Prior to the 2018-19 season, that was the only time the Canucks had gone without a captain. What was different about last season is that the Canucks definitely had a clear candidate for captain: two-way centre Bo Horvat.

Horvat leads by example on the ice, is always available to talk to the media after games — win or lose — and has the respect of both his teammates and his opponents. When Jonathan Toews was asked about young players in the NHL that he admires, he immediately named Horvat.

“I always kind of recognize the guys who do have a ton of skill but are playing a two-way game and aren’t filling the net or getting the points every single night,” said Toews. “Bo Horvat is a guy who I like because of the way he works. If you go head-to-head with a centreman like that, you’re not going to have an easy night.”

There were hints that Horvat not being named captain became an inside joke among the players. For instance, there was Brock Boeser and Elias Pettersson jokingly calling him “Cap” at the Canucks Dice and Ice event.

Still, the Canucks had their reasons for going without a captain last season. Perhaps they wanted to avoid putting undue pressure on a young player in what was likely to be a difficult season. The previous captain was the best player in franchise history, give or take a couple genes, which are some pretty big shoes to fill.

Between Linden and Markus Naslund, there were the troubling days of Mark Messier, whose vaunted leadership never seemed to show up in Vancouver. That set a pretty low bar for Naslund to clear, a much easier transition than if Linden had passed on the “C” directly to Naslund.

After Naslund was captain for seven years, he left in free agency and the Canucks gave the captaincy to Roberto Luongo. It was a controversial move that arguably put undue strain on the goaltender and it was a relief when he passed on the captaincy to Henrik Sedin two years later.

Perhaps having no captain at all was preferable to those transitional captains of the past.

Another possibility is that the Canucks wanted to wait to bestow the captaincy on a player as part of the 50th Anniversary celebrations. It’s easy to picture the Canucks kicking off their home opener on October 9th with a ceremony featuring as many of their past captains as possible, with a jersey hand-off from Henrik to the new captain, much like he received the captaincy from Kurtenbach himself.

According to Horvat, he’s ready for the role if they name him captain.

“Yeah, I think so," said Horvat on Thursday at the NHL Player Media Tour. "First of all, it would be an unbelievable honor to wear the C, and to wear any letter for that matter. But even to be in consideration is definitely humbling. But it wouldn't change who I am."

“It wouldn't change the type of player I want to be," he added. "I wouldn't let it affect me that way. I'd just try to be the best leader I can be."

At the same time, Horvat was diplomatic, suggesting there was no rush to name a captain and that there were “a lot of guys in our room who can do it.”

Perhaps that’s part of the reason the Canucks waited as well. There are other players who could be the captain of the Canucks. Perhaps Pettersson could continue the Canucks’ history of Swedish captains. Boeser has maturity beyond his years after some difficult life experiences and he’s a tremendous person off the ice to go with the example he sets on the ice. Or, if the Canucks would prefer a veteran for some reason, there’s always the indefatigable Alex Edler.

Any choice other than Horvat, however, would be a surprise to the fans and possibly the players as well. The question is whether the Canucks will name a captain in the coming season or not.

Former NHLer Anthony Stewart believes in naming a captain sooner rather than later. Speaking in reference to the Toronto Maple Leafs, who have also yet to name a captain.

“When you don’t have a captain in that dressing room, it shows the players that management doesn’t really know what’s going on,” he added. “I would rather them make the wrong choice, because you can say, at least, management, this is who they’re identifying, this is who we’re going to go with...you at least respect it.”

Is it time for the Canucks to name a new captain? And, if so, should it be Bo Horvat?