A joint ceremony was held Friday where the Aga Khan received honorary doctorate of laws degrees from both universities
Oct 19, 2018 5:23 PM By: Jessica Kerr 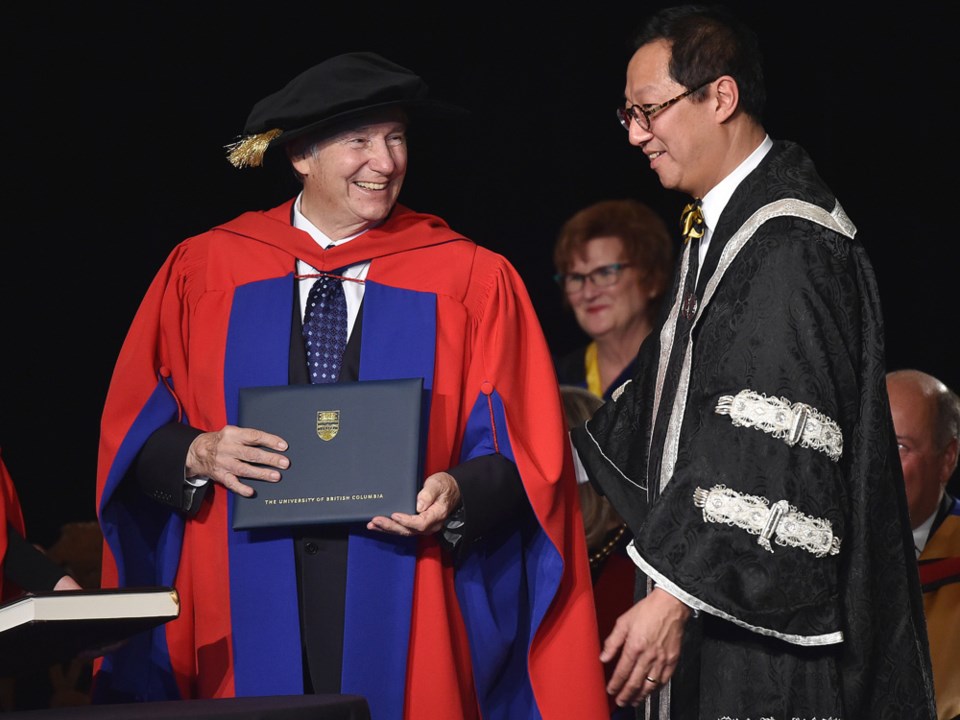 His Highness the Aga Khan (left) with UBC president and vice-chancellor Santa Ono at a joint ceremony in Vancouver Friday where UBC and SFU each awarded him with an honorary doctorate of law degree. Photo Dan Toulgoet

The Aga Khan, the spiritual leader of the Shia Ismaili Muslim community, was in Vancouver Friday to receive honorary doctorate of laws degrees from the University of B.C. and Simon Fraser University.

“This is an historic occasion for both universities,” UBC president and vice-chancellor said ahead of Friday’s ceremony. “It’s especially meaningful that we’re doing it together as SFU and UBC, we’re honouring an incredible individual who has given so much to help individuals around the world and to help with education and to make sure that those who are less privileged are taken care of.”

It is the first time the two universities have collaborated on handing out an honorary degree, the highest honour a university can bestow on an individual.

“It is truly a wonderful day to be able to honour His Highness the Aga Khan, who so exemplifies the values of our universities in terms of believing in education as an instrument for social betterment,” said SFU president and vice-chancellor Andrew Petter.

“I think it takes someone of the stature of the Aga Khan to get two universities to actually figure out how to bring their convocations together,” Petter joked. “Now the Aga Khan is well known for his commitment to reconciliation but to reconcile to convocation ceremonies is really quite an accomplishment.”

The honorary degrees were bestowed upon the 49th hereditary imam for Shia Ismaili Muslims Friday afternoon in recognition of his lifelong service to humanity and his work at both universities at a joint ceremony at the Vancouver Convention Centre.

Through a partnership with the Aga Khan Academies’ Teacher Preparation Programme, UBC’s international baccalaureate team of faculty and adjunct faculty are mentoring and evaluating teacher interns in Mombasa, Kenya who are seeking certification.

“We are grateful to His Highness the Aga Khan for his support of our partnership, which aims to improve the educational opportunities available to young people in Africa and promote a deeper global perspective among teachers and students in B.C.,” Meredith Fenton, director of IB programs in the faculty of education at UBC, said in a press release.

SFU’s Centre for Comparative Muslim Studies has a partnership with the Aga Khan University’s Institute for the Study of Muslim Civilisations establishing an internationally renowned summer school on Muslim diversity, Expressions of Diversity, providing participants with a historical understanding of Muslims within larger and more diverse frameworks.

The Aga Khan has a longstanding relationship with Canada going back over 40 years and has worked closely with Canadian governments and organizations that promote inclusive, sustainable development and improve quality of life.

For more than 60 years he has advocated for a pluralist, cosmopolitan ethic that embraces human diversity as an opportunity and as an antidote to social fragmentation and division.

Inspired by the Islamic ethic of compassion and the responsibility to help those less fortunate, the Aga Khan Development Network is a global network of development agencies that are active in more than 30 developing countries and employs some 80,000 people working for the common good of all citizens, regardless of gender, origin or religion. The network invests close to $1 billion a year for non-profit social and cultural development activities around the world.