The Canucks’ top pairing has been the team’s most pleasant surprise early in the season.
Nov 7, 2019 9:05 AM By: Daniel Wagner 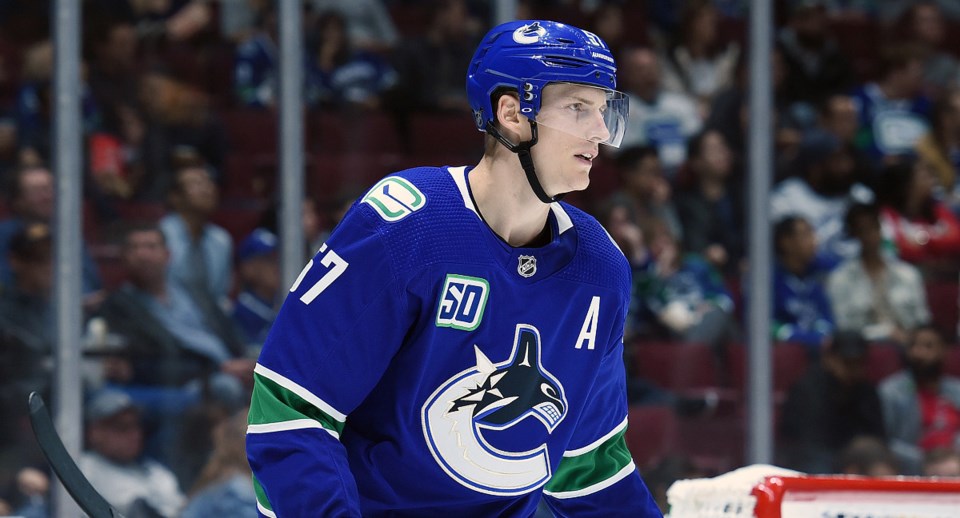 Take one aging veteran defenceman, whose injuries have taken a toll on him in recent years. Even as he’s continued to put up points, his play has quietly been on the decline.

Add a big-name free agent defenceman, whose signing was excoriated by the hockey analytics world, as he’s consistently given up far more defensively than he ever contributes offensively.

Put them together and what do you get? One of the best defence pairings in the NHL.

The Canucks have been one of the best teams in the NHL to start the 2019-20 season, racking up goals and rattling off wins. There’s plenty of credit to go around: the top line of J.T. Miller, Brock Boeser, and Elias Pettersson has been dominant, the goaltending of Jacob Markstrom and Thatcher Demko has been lights out, and the Quinn Hughes-quarterbacked power play is one of the best in the league.

The impact of the Canucks’ top pairing on defence, however, should not be overlooked. Alex Edler and Tyler Myers have been playing big minutes in all situations with fantastic results.

Edler is the longest-tenured player on the Canucks, having played with the same team since his rookie year in 2006-07. The age is starting to show in the touches of gray in his beard and in a decline in his offensive game at even-strength that was partially masked by his production on the power play.

At least, that was the case until this season.

Likewise, Myers has been a conundrum in the NHL for years, as his fantastic, Calder-winning rookie season was followed by years of middling play and point totals. Flaws in his defensive game had Winnipeg Jets fans pulling their hair out at times and according to some metrics, Myers is a below-replacement level defenceman; you could arguably find a better defenceman on the waiver wire or in the AHL.

But not this season.

Whether because the strengths and flaws of Edler and Myers perfectly balance each other or because the rumours of each of their demises were greatly exaggerated, the two defencemen have been a perfect match.

Edler and Myers have been offensively dominant. The pairing has been on the ice for 71.95 shot attempts per 60 minutes at 5-on-5, which leads all pairings that have played at least 100 minutes together. Combine that with solid numbers defensively and you have a pairing that tilts the ice in the right direction for over 20 minutes per game.

That stems from how dangerous Edler and Myers have been in transition with their ability to move the puck up ice with their skating or passing.

“It starts with how you're defending the rush,” said Myers on Monday. “What we've talked about at the very start at camp, we're a very aggressive team defensively and I think it's allowing us to have more offence. Combine that with some of the guys we have up front, with the plays they can make, [the puck is] going in for us right now.”

Head coach Travis Green likewise credits their defensive game for how dangerous the Canucks have been offensively when they’ve been on the ice.

“They take away time and space, and they've got a long reach,” said Green. “I think that allows us not to spend as much time in your own zone… People get enamored with offense and points, but not spending time in your zone means you're spending it in the other team's zone.”

Combine that with the fact that Edler and Myers typically play in a matchup role, facing some of the best forwards the opposition has to offer. When they’re on the ice, Edler and Myers typically force them to spend most of the game defending in their own zone. It’s one of the biggest reasons the Canucks have been so successful to start the season.

Now, the question is whether they can make it last. Can Edler stay healthy? Can Myers stave off the defensive mistakes that plagued him in Winnipeg?

A tap of the stick to Elias Pettersson, who was named the NHL’s 1st Star of the Week last week after 9 points in 4 games.

I’m dropping the gloves with Don Cherry, who reacted to Scott Sabourin of the Ottawa Senators getting knocked unconscious with, “He just got knocked out, that’s all,” when we know more than ever the danger of head injuries and concussions.

104 - J.T. Miller has been unreal through his first 15 games with the Canucks, who have out-shot the opposition by 104 shot attempts with Miller on the ice at 5-on-5. That doesn't just lead the Canucks, but the entire NHL.

4.33 - Elias Pettersson is racking up points on both the power play and at even-strength. His 4.33 points per 60 minutes is third in the NHL behind only David Pastrnak and Brad Marchand of the Boston Bruins.