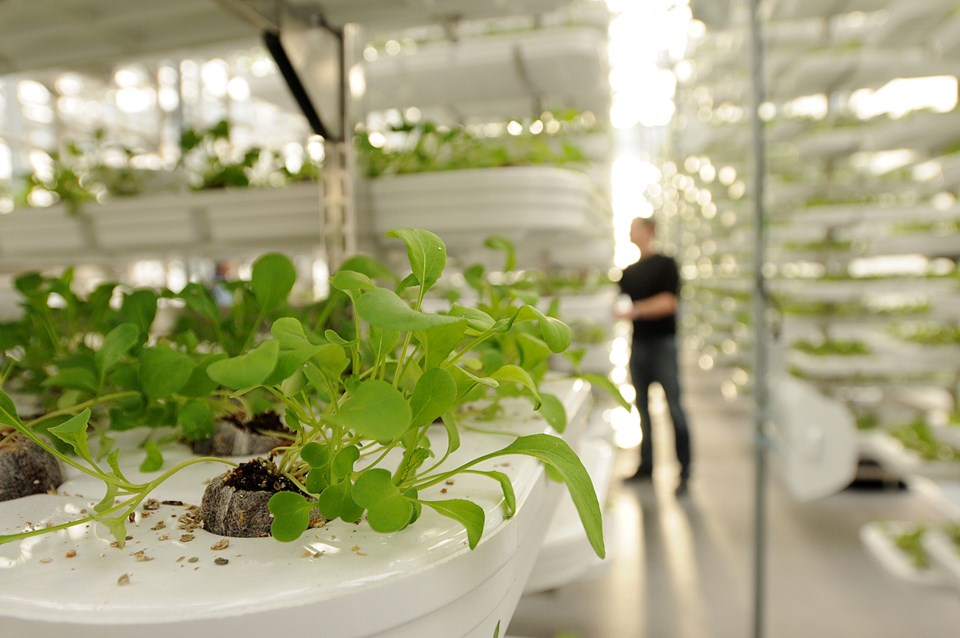 The company that operated a mass-producing greenhouse on top of a parkade on Richards Street has filed for bankruptcy. Alterrus and its subsidiary owe more than $4 million to creditor. Photo Dan Toulgoet

A company which transformed a rooftop parkade into a mass-producing vegetable greenhouse — and touted by Mayor Gregor Robertson as an example of Vancouver’s “booming clean tech sector” — has filed for bankruptcy and owes its creditors more than $4 million.

Alterrus listed its liabilities as $3.8 million and Local Garden at $1.4 million, with a total of $1.25 million owed to Vancity Credit Union.

Alterrus, whose head office was at 120 Columbia St., listed no assets while Local Garden totalled $45,000, according to bankruptcy records filed with the Office of the Superintendent of Bankruptcy Canada.

Alterrus posted a statement on its website, acknowledging its financial trouble, problems with crop production and a mechanical failure in December 2013.

“As in many bankruptcy proceedings, it is regretful that many stakeholders will not be able to recover their losses, particularly since they have supported the cause with real value,” the statement said. “It is never an easy decision for a management team to make as the impact is often sudden and possibly unexpected.”

When the business launched in November 2012, Alterrus promised to produce about 150,000 pounds a year of pesticide-free leafy green vegetables and herbs to be distributed to local restaurants and grocers.

Alterrus negotiated a deal with the City of Vancouver, which owns the building on Richards, and EasyPark, which manages the parkade.

The company paid a total of $26,200 in rent to EasyPark from November 2012 to August 2013, according to Drew Snider, spokesperson for EasyPark.

Snider described EasyPark as a non-profit company of which the City of Vancouver and the Downtown Vancouver Association are sole shareholders.

“So the way it works is, any surplus generated at the end of the year goes to the city,” said Snider, although he didn’t know whether all of the $26,200 went to the city once the number crunching was done.

Martin Hyatt, bankruptcy trustee at The Bowra Group Inc., which has taken over the companies’ affairs, said Alterrus still owes EasyPark $13,000 for rent.

The mayor said at the time of the company’s launch in November 2012 the parkade was underused and Alterrus’ operation would provide much-needed jobs and fresh, local food.

“This project demonstrates the innovative spirit in our city’s booming clean tech sector,” Robertson said at the launch.

Upon hearing of Alterrus’ demise, the mayor issued a statement saying he was disappointed but noted there are more “strong local food companies seeing success” in Vancouver.

“Having Alterrus lease the space generated more revenue for the city than when it was a parking lot,” the mayor said.

NPA Coun. George Affleck had concerns with Alterrus and its deal with the city when the company launched in November 2012. He issued a press release at that time calling for the city to invite the auditor general for local government to examine the contract between Alterrus and the city.

At the time, Affleck said Alterrus had an accumulated deficit of $52.8 million and the company’s financial position was “incredibly insecure.”

Looking back on his concerns, Affleck said Monday he was sorry to hear the news of the company’s bankruptcy. But, he said, the city should have done a request for proposals call and invited more companies to bid on the parkade space.

“I don’t feel we did our due diligence — not only on the company but on the process on how that space is rented out,” Affleck said.

The mayor got more bad news last week when the chosen supplier of a proposed bike share system for Vancouver announced Monday that it filed a notice of intention to seek protection under the Bankruptcy and Insolvency Act related to its Montreal bike share system and growing debt.

PBSC Urban Solutions, or Bixi, is to work with Alta Bicycle Share to implement Vancouver’s system by this spring. Jerry Dobrovolny, the city’s transportation director, told the Courier last week that a launch date — if it occurs — is more likely in 2015.