Andy Dunn is the perfect Mr. Baseball. More Norman Rockwell than Mark McGwire, the president of the Vancouver Canadians has a charming afternoon-at-the-ballpark personality.
Jul 4, 2013 9:00 PM By: Vancouver Courier Staff 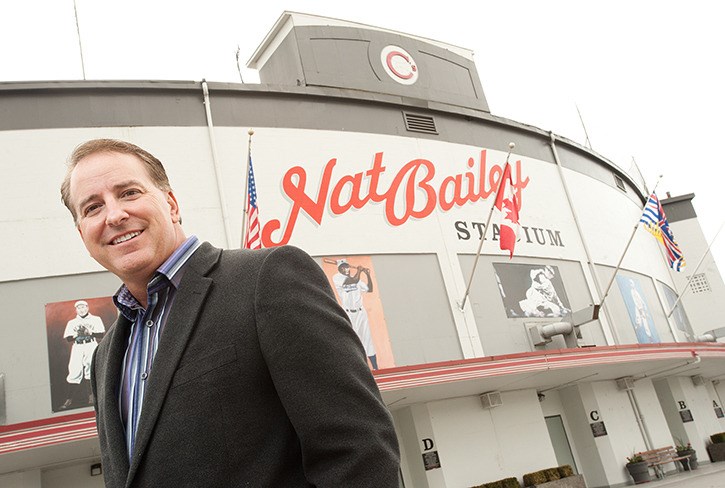 More Norman Rockwell than Mark McGwire, the president of the Vancouver Canadians has a charming afternoon-at-the-ballpark personality. Hes even kept enough of his sun-filled southern accent to evoke a Field of Dreams belief that life cant get much better than sitting in the bleachers at Nat Bailey Stadium.

He wants men and women, young and old, neophyte and addict, to to watch a game. He talks as enthusiastically about the $1 A&W root beer floats on Sundays as he does about the teams league championships. Heck and he probably would say heck , this is the man whos introducing yoga classes at baseball games.

But as much as he wants everyone to fall in love with baseball as much as he has, dont think he doesnt have a highly competitive streak. He just believes that baseball isnt only about the game. Baseball is nostalgia, a game that lives as much in our collective cultural memory as it does in our present-day lives, whether we are fans or not.

Watching a ball game at Nat Bailey Stadium is about families spending time together. Its about having an affordable and fun outing. Its about appealing to both the diehard baseball fan who loves that the Canadians are affiliated with the Toronto Blue Jays and the person who has never watched a professional game before. (Find some summer highlights here.)

There are tons of reasons to come to the ball park and one of the least of them is to see who wins or loses, he says.

Over a healthy salmon lunch at West on South Granville, hes surprisingly philosophical both about the game and how he came to be in Vancouver as the head (and partner) of Canadas only remaining minor league team.

Sports changed my life, he says. One of four brothers, hed have had zero chance of a post-graduate degree if he hadnt been offered an athletic scholarship. Born in Georgia, where football is a religion, his family moved to Florida when he was five. He played football and baseball as a teenager but, when accepting an athletics scholarship to study sports management at Western Carolina University, opted for the baseball team.

To me, its like watching an opera every night, he says of the game. I love that theres so much going on underneath a very quiet, peaceful activity.

There were things about major league baseball, and the people involved with it, that he didnt like. Thats when he was lured to Vancouver by the teams enthusiastic new owners, Jeff Mooney and Jake Kerr. The Canadians might be a minor league team but theyre in a city with major love for the game and thats what counts most for Dunn, the father of three girls who have made me a better person.

I want to be with people I like, and trust, he says. If you find someplace you have happiness, hang onto it.

Vancouver is that place. And hes Vancouvers man when it comes to upping the game on the field and off.

As part of his goal to continually break attendance records at the stadium he helped refurbish, Dunn also wants to preserve the glory days of baseball. Kids should have heroes, he says. We want to be your team.

To make sure as many kids as possible get to play as well as watch baseball, the Canadians Baseball Foundation funds, transports, feeds and uniforms 340 kids [in little league teams at the Nat] and they dont pay a dime.

Vancouver seems to be returning the love: the Canadians have had only one rained out game in four years.