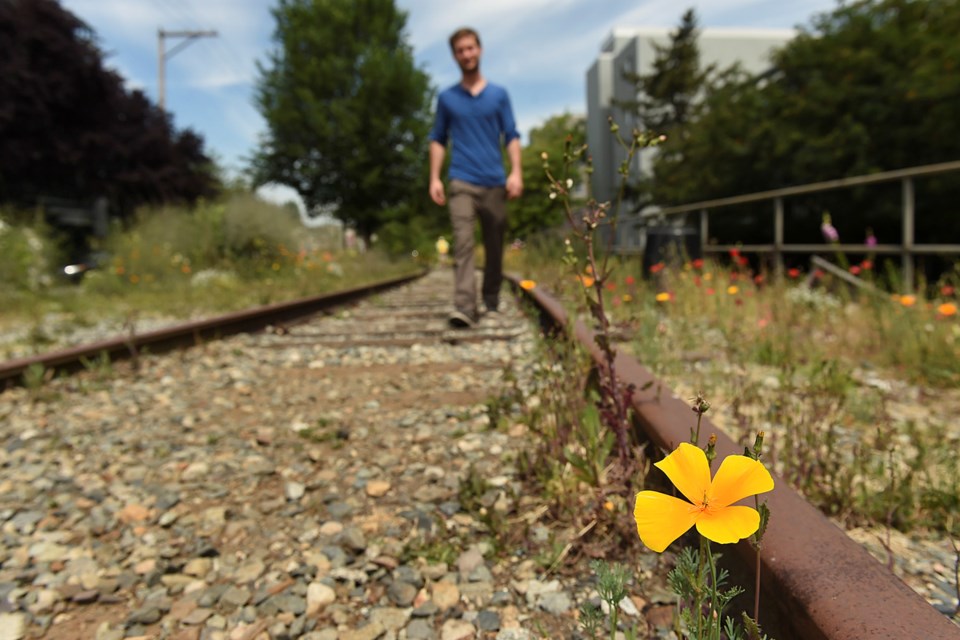 Canadian Pacific railway crews are expected to start removing train rails, ties and rail bed materials along Arbutus Corridor this week — work that kicks off a complex city planning project that will ultimately see the nine-kilometre stretch transformed into public greenspace for walking and cycling. Space will also be reserved for a possible streetcar in the future.

The work begins only three months after the city announced it had purchased the property from CP. According to the purchase agreement, CP is responsible for all rail removal along the corridor, while the city is responsible for rail removal at street crossings. CP expects the job, which involves heavy equipment, to proceed at a rate of about one kilometre per week. Work was to start at the north end.

Staff for the Arbutus Greenway project office are also being hired — nine in total, including a project manager, a development officer, a communications manager, a planning analyst, an engineering project manager, a transportation design lead, a landscape architect, a streets design engineer and a project coordinator. The team will be based in existing space on city hall grounds and the positions are at various stages of recruitment. Costs associated with the project office are tagged at $3 million.

Jerry Dobrovolny, the city’s general manager of engineering, calls the greenway project a “huge” initiative that will evolve in stages.

“I don’t know how many times I can use the phrase, ‘This is a once-in-a-generation or a once-in-a-career city building project.’ We’ve got the viaducts, which falls into that same category, but yeah, it’s unheard of to be getting almost 10 acres of land that runs from the Fraser River to False Creek with some amazing vistas and views on the route,” he said.

“It’s primarily a transportation corridor — that’s what we’ve purchased and that’s what the zoning is, but in addition to walking, cycling and a future streetcar line, we’re looking at making it a demonstration project around lighting, so that we’re not contributing to light pollution. We want it to have lots of light and be safe and comfortable for all ages and abilities of people, but at the same time, we don’t want it to feel like stadium lighting.”

Dobrovolny added that there will be a strong cultural component given that the Arbutus greenway starts from First Nation land and travels through areas that are very important to the Musqueam and Squamish nations.

“We’re looking at ways we can incorporate that into the final project as well,” he said, adding, “There are migrating bird pathways and opportunities for public art.”

Dobrovolny said the initial goal is to make near-term safety improvements and create a temporary path, at a cost of $2.7 million, to make the route safe while work is underway on the final plan.

Once the project office is staffed, he said there will be a 12 to 18-month-long vision and design process, which will include identifying if there will be excess land. If there is excess land, a separate process will be launched about what do with that land after the design is completed.

“Excess land could be turned into park [land], it could be market, it could be non-market. So there’s a lot of other [possible] uses. The community planning process would determine the use,” Dobrovolny said.

In any case, staff have already held pop-up city halls about the Arbutus greenway and attended community and resident association meetings about the project. More informal meetings are expected this summer before formal consultation begins.

The Arbutus greenway project is estimated to cost between $25 and $35 million, although a detailed cost estimate cannot be calculated until the design work is finished.

“People are really excited about the project. Expectations are very, very high,” Dobrovolny said. “We want to do some blue sky visioning in terms of what we could do, but then also start to bring it down to look at what the tradeoffs would be. The fundamental that’s required is that it be a transportation corridor.”

Dobrovolny said there are lots of challenges for such a large project, but he maintains the city can advance corporate goals, healthy city goals, healthy people goals, as well as environmental, ecological and cultural goals.

“There are many [challenges]. It’s a very, very big project. There are lots of expectations, hopes, dreams and wants. So it’s to bring that all together and then have a robust process to narrow down what we want to advance as a part of the project,” he said. “What I find is when we spend the proper time to involve the interested people, we can land on solutions that achieve multiple goals. So that’s my expectation with this project.”

Jim Hall, a member of the Arbutus Ridge Kerrisdale Community Plan Implementation Committee [ARKS], has followed the Arbutus Corridor saga since the mid-2000s. He feared a deal between the city and CP wouldn’t happen in his lifetime, but he’s pleased a sale agreement was finally reached.

Hall said Dobrovolny spoke about the greenway project at a recent ARKS meeting, which attracted about 100 residents, and he was well received.

“Everyone was saying things like ‘sensational’ [about the plans] — using all kinds of neat adjectives,” he said. “[Dobrovolny] promised lots of public meetings and feedback [opportunities] and they’re going to be consulting with other cities that have great systems. And, not just residents used adjectives like sensational. He did too. He wants it to be world class. Yeah, we’re feeling pretty good about it — the whole process.”