A visionary architect, an activist and a gentleman. That’s how mourners are remembering Joe Wai, who died last week at age 76. It was only last November that Wai earned a Lifetime Achievement Award from the Architectural Institute of B.C.
Jan 16, 2017 1:28 PM By: Naoibh O’Connor 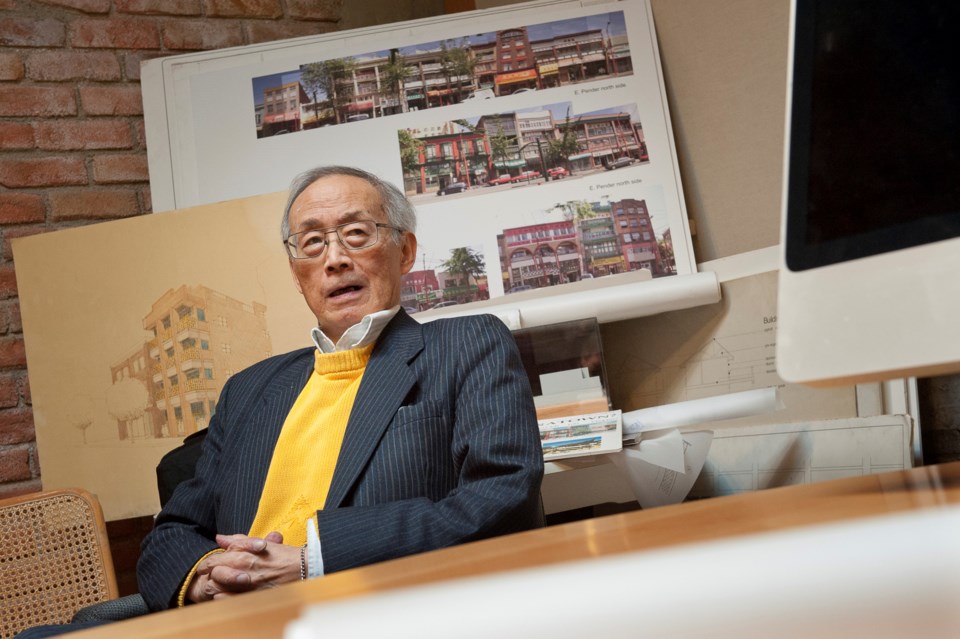 A visionary architect, an activist and a gentleman. That’s how mourners are remembering Joe Wai, who died last week at age 76.

It was only last November that Wai earned a Lifetime Achievement Award from the Architectural Institute of B.C. — one of many accolades throughout his career. And it was only last week, shortly before he passed away, that he attended an open house for the controversial rezoning proposal for 105 Keefer St. in Chinatown.

“He was at an open house for 105 Keefer on Tuesday night. That’s why it’s shocking. People knew that he had health challenges but he was up for going [to the meeting] to speak out and stand up for what he believed. And I was on a conference call with him the day before,” he said.

Yu, a UBC history professor, grew up in Vancouver so he was aware of Wai’s fame as an architect long before he met him 15 years ago — Wai and architect Don Vaughan designed the Chinese Garden in Chinatown, Wai was also behind the Chinese Cultural Centre Museum-Archives in 1998, the Heritage Alley-Han Dynasty Bell in 2001, the Chinatown Plaza Parkade in 2002, the Chinatown Millennium Gate in 2002 and the Chinese Freemasons Building restoration in 2006. Wai fought the freeway expansion that would have destroyed Strathcona and he’s known for infill houses dubbed Joe Wai Specials in Strathcona.

When Wai was on UBC’s Board of Governers between 2000 and 2002, he called attention to the need for a focus on Chinese history. Then-UBC president Martha Piper immediately created a position, which Yu now holds in the history department.

Wai’s death prompted Yu to write a heart-felt blog about their friendship and Wai’s significant impact on Vancouver.

“I cannot count how many meetings I have had the privilege of being at with him, and I can hear clearly in my mind at this very moment the sound of his voice, persuasively articulating what needed to be done or explaining with clarity the history of why things had become the way they were,” Yu wrote. “Although his professional life was as an architect, and in particular as a defining presence in heritage architecture, his most profound effect for me and I am sure for many others has been in his longstanding involvement in the civic life of Vancouver.”

Yu described Wai as being outspoken, yet with a low, quiet voice.

“He was not a shouter. He was incredibly humane. He did not demonize his opponents. It was the gravity and the content of what he said that made him powerful. It wasn’t the volume of his voice,” Yu told the Courier. “That kind of civility and grace and generosity was what made him revered and respected — even by those who disagreed with him. He was a gentleman in that sense of the word.”

Yu also avoided becoming cynical or frustrated by the slow pace of change, according to Yu.

“He’d gone through a lot of victories and defeats over his decades of being involved in political life, so to speak, so he was very humane about not becoming angry, frustrated, not demonizing people and, in some sense, always being gracious and a gentleman… The phrase I use is he was a bulwark against cynicism. That’s why you see such an outpouring now.”

“In addition to all the buildings he put up, and the [Millennium] gate and the [Dr. Sun Yat-Sen] garden, he really embodied the spirit and values of Chinatown — the emphasis on community and helping out the community,” Yuen said. “That’s a really salient value in Chinatown, which he represented.”

Yuen also cited the importance of Wai’s activist work such as fighting the freeway, and his reputation for building the so-called Joe Wai Specials.

In memory of #JoeWai, here's a post I wrote in 2012 on a Vancouver "Extra" Special house he designed in Strathcona https://t.co/cjrFZBnr1u

My own musings on #JoeWai, and how he influenced our city, my neighbourhood, and me https://t.co/Iin1WWiW9F pic.twitter.com/qeHqxNgHp1