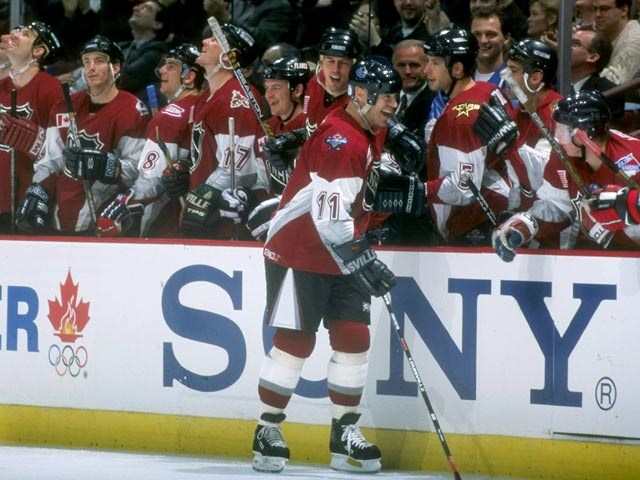 Mark Messier celebrates what turned out to be the game-winning goal at the 48th NHL All-Star Game held in Vacouver. Photo: Vancouver Canucks

The NHL All-Star Game is held in Vancouver for the first time in more than two decades and, instead of the usual eastern vs. western conference tilt, features the best players from the U.S. and Canada taking on the best from the rest. NHL players were eligible to compete at the Olympics for the first time the following month in Nagano, and the decision was made to inject some national pride into an annual game that is otherwise essentially meaningless.

After trailing 3-0 in the early stages of the game, the North American team managed to stage the biggest comeback in All-Star Game history to win 8-7. Vancouver Canucks captain Mark Messier scored the game-winning goal on home ice four minutes into the third period after taking a pass from former Edmonton Oilers teammate Wayne Gretzky.

The game was also notable for Anaheim Mighty Ducks forward Teemu Selanne, after scoring a hat trick, becoming this first European in league history to be named the game’s most valuable player.

NHL players weren’t the only ones making their debut at the Olympics that year. Women’s hockey was also a medal event for the first time, and the All-Star weekend featured an exhibition game preview between the Canadian and the American national women's hockey teams. An estimated 14,000 people, the biggest crowd ever in women’s hockey at the time, came out to watch Team Canada beat the U.S. 2-1.