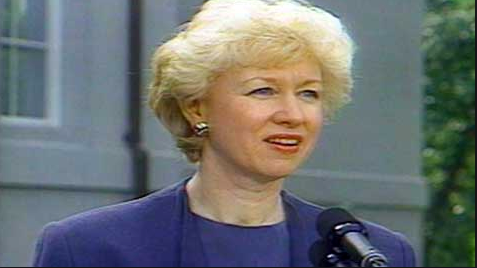 UBC graduate and Vancouver Centre Member of Parliament  Kim Campbell is sworn in as Canada’s 19th prime minister. Campbell beat chief rival Jean Charest to win the Progressive Conservative party leadership vote after highly unpopular PM Brian Mulroney announced he was stepping down. Canada’s first and only female prime minister ruled for just four months before a landslide loss to Jean Chretien’s Liberals that saw the Tories win only two seats. Although she at one point had reached a nearly 51 per cent approval rating among Canadians, a now-infamous attack ad that appeared to mock Chretien's facial paralysis is widely credited for turning the tide against the Conservatives.


Campbell lost her own seat to Hedy Fry and resigned shortly afterward, returning to teaching political science at Harvard University. In 1996 she was appointed as Consul General in Los Angeles, a post which she held until 2000. In 2013, she was appointed principal of the new Peter Lougheed Leadership College at the University of Alberta.