Jim Benning made a bold move on Friday, drafting Swedish centre Elias Pettersson fifth overall, when many expected them to select Cody Glass.
Jun 26, 2017 7:30 AM By: Daniel Wagner
Previous Next
1 / 1
Expand
Previous Next

Jim Benning made a bold move on Friday, drafting Swedish centre Elias Pettersson fifth overall, when many expected them to select Cody Glass. Perhaps Benning experienced flashbacks to his first draft when he passed over the small, skilled Swede in favour of the Canadian out of the WHL and didn’t want to make the same mistake.

It’s more likely, however, that Benning went with Pettersson because Thomas Gradin pushed for him, like he pushed for the Sedins with Brian Burke.

“Thomas did all the work on these kids,” said Burke years later. “He pushed, and pushed and pushed. When I came back and said I’d made those deals, I’d never seen a smile on a guy’s face bigger than that. It’s like he’d won the lottery.”

Gradin had that same smile on his face when Pettersson came off the stage in a Canucks jersey, greeting him with a big hug.

But there’s another reason why Benning went with Pettersson: Jonathan Dahlen, the prospect they acquired from the Ottawa Senators in the Alex Burrows trade. He admitted that their chemistry together on the top line for Timra IK in the Allsvenskan played a role in the decision.

Two playmaking Swedish stars, a centre and a left wing, with built-in chemistry from playing together in their native land? That has to sound familiar to Canucks fans, who have seen the Sedin twins use their chemistry to lead the Canucks to the most successful seasons in franchise history.

Have the Canucks not only found the heirs apparent to Henrik and Daniel, but also the heirs to their mantle as the best Swedish twins in the NHL?

Unlike the Sedins, they don’t play all that similarly, but all that does is prove nurture-over-nature. Raised separately, they developed different styles of play, but their innate twin-brother connection cannot be denied.

After all, the two tore up the Allsvenskan this past season, finishing fifth and ninth in league scoring, with nearly twice as many points as the next best teenagers. The Sedins similarly outscored all their teenaged counterparts in their draft year, albeit in the Swedish Elite League rather than the Allsvenskan. You have to ask yourself: how is it possible for Pettersson and Dahlen to do that without the twin connection? Two talented hockey players simply can’t have chemistry unless they are twins.

Now, there are some interesting counter-arguments. One might be the fact that they look nothing alike. 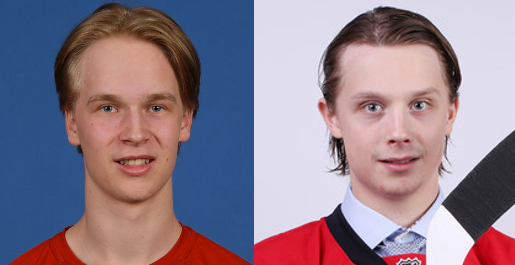 Another issue is that Pettersson and Dahlen were born almost a year apart. Pettersson is 18 and was born November 12th, 1998, while Dahlen is 19 and was born December 20th, 1997, which would mean an exceptionally long labour.

Is it classless to demand to see their birth certificates for no real reason? I mean, the last guy who made a big fuss about seeing a public figure’s birth certificate got elected President of the United States, so that must mean it’s okay.

There’s also the issue that their listed birthplaces are over 180 kilometers apart, but since we already established their suspicious reticence to release their birth certificates, I think we can safely dismiss that issue.

If you think this idea that Pettersson and Dahlen are twins like the Sedins is ridiculous, I’m not sure why. What’s ridiculous about comparing two teenaged prospects to two certain Hall of Famers and the greatest Canucks of all time, simply based on their home country?