B.C.'s new minister of mental health and addictions is talking to everyone touched by opioid crisis to find solutions
Aug 1, 2017 2:39 PM By: Tracy Sherlock 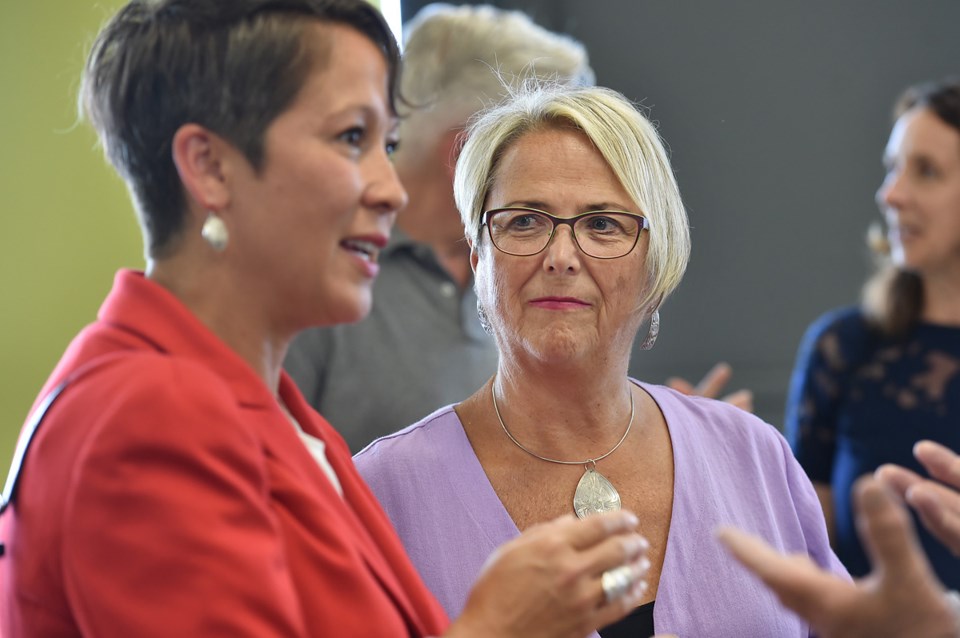 MLA Judy Darcy has a huge task before her. She’s been charged by Premier John Horgan with responding to the opioid crisis gripping our province.

Four people a day died from drug overdoses in British Columbia in May, the most recent statistics show. More than a year after B.C.’s provincial health officer declared a public health emergency, the numbers are still climbing.

In 2016, 935 people in B.C. died from illegal drug overdoses, a government report shows. This year, 488 people died in the first four months, putting the province on track to see nearly 1,500 people die this year.

Those people come from every walk of life and every community. They’re mostly men (82 per cent), mostly middle aged (73 per cent were aged 30-59), and mostly people doing drugs alone at home (90 per cent died indoors) statistics from the B.C. government and the Coroner’s Service show.

Fentanyl, an opioid from the same family as morphine and heroin, has been detected in about two-thirds of these deaths.

Darcy, NDP MLA for New Westminster, is tasked with creating a new Mental Health and Addictions ministry to deal with this crisis. Horgan has asked her to develop an immediate response to the crisis, with a focus on mental health.

How will Darcy do it? She’s not sure yet, but the first step she is taking seems appropriate – she is meeting with people on the ground to seek advice from those who are directly involved.

In an interview in late July, Darcy told me she had visited the Surrey strip – an area where more than 100 people live in a tent city – as well as Vancouver’s Insite, North America’s first legal safe injection site, and Crosstown, the only clinic in North America to offer medical-grade heroin to addicts.

While visiting the Overdose Prevention Society, she said she saw an overdose.

“I saw them save a life,” she said. But many other lives have been lost and that is something Darcy wants to change.

Darcy was the national president of the Canadian Union of Public Employees, after serving six years as secretary business manager for the Hospital Employees Union in B.C.

The opioid crisis is not just a Downtown Eastside problem – it affects all walks of life and all communities.

“They could be your next-door neighbor. It could be anybody,” Darcy said. “That’s the thing that keeps hitting me over and over.”

At Crosstown, she met with three men who use the organization’s services. She says the first two were injured at work – one was a carpenter, the other a logger – and they became addicted, first to their pain medications, then later to street drugs. The third man was a foster child who started doing mild drugs at the age of 12 and turned to harder drugs by 15. Darcy said he got involved with crime to support his habit and was eventually arrested and later was in and out of jail dozens of times. Today, with the help of Crosstown, he has gone back to school to earn his cook’s certification and is now studying to become a hairdresser.

“He is working as a cook and as a peer support worker,” Darcy said. “They saved his life and put him on a path that has given him hope.”

Darcy wants to see more education, early intervention and treatment options. She says treatment on demand is one of her goals, but that it will take a while to get there.

There are some short term fixes that can help – safe injection sites, fentanyl testing strips, legal morphine for addicts, but the problem won’t go away until the root cause is addressed.

Dr. John Millar, a former B.C. provincial health officer and medical and public health professor emeritus at UBC, said earlier this year that more people are dying from “diseases of despair.” He said when people are overly stressed about finance or housing or jobs, they tend to use alcohol or opioids to ease the stress and that can be deadly.

Darcy hopes that along with her new ministry’s focus on mental health, the new government’s planned poverty reduction strategy and boost in services for the ministry of children and families will ease that despair. The ministries of housing, health and education are crucial to stopping the crisis, she said.

“The key is to give people hope, but it’s not just hope, you have to give them a pathway to hope,” Darcy said. “That means services that are available for them where they need them and when they need them.“

Giving people hope may be a long-term strategy, but it sounds like a wise place to start. Let's hope it's backed up with a budget to match.