How quickly things change. It was only about a month ago in this very column that I lamented the summer closure of two record stores within two blocks of each other in Hastings-Sunrise.
Sep 8, 2016 1:21 PM By: Grant Lawrence 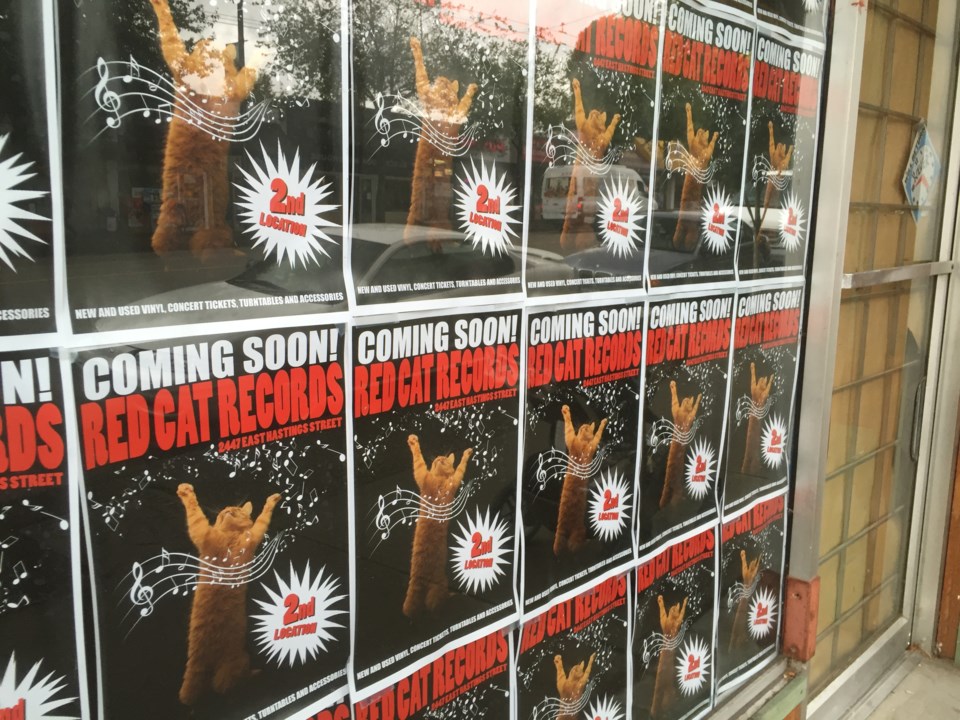 Hastings-Sunrise may have lost Horses, but it’s gaining a Red Cat!Grant Lawrence

It was only about a month ago in this very column that I lamented the summer closure of two record stores within two blocks of each other in Hastings-Sunrise.

The eclectic Horses Records closed in July and the punk-focused Hits and Misses will shutter in the coming weeks. That had me waxing nostalgic for the days of Seymour Street’s famed Record Row, and many of you joined me in that stroll down musical memory lane.

Seymour Street remains devoid of anything resembling its rock ‘n’ roll retail glory years in the 1990s, but Hastings-Sunrise has rebounded quickly with big news for lamenting audiophiles.

Red Cat Records, a thriving Main Street mainstay since 2002, will make Vancouver record store history in September. They’ll open a second store in the former location of Horses Records, at 2447 East Hastings at Nanaimo. No other indie record store has ever opened a second location in a different neighbourhood in this city.

“I was actually eyeing that exact location for a second store before Horses Records scooped it,” says the affable Dave Gowans, who has co-owned Red Cat Records with Lasse Lutick since 2008. “The idea of a second store has been on my mind for awhile, and several of our staff live in that neighbourhood.”

Just a few years ago, the thought of a record store expanding to a second location would seem unthinkable in our times of streaming, filesharing, and downloading. Vinyl ain’t coffee or cupcakes, but Gowans has done his research.

“Opening second record shops in the same city has happened frequently in the States. There’s several examples of it working,” explains Dave. “We just hope it works for us in Vancouver. The new shop will be a smaller space, with a focus on new vinyl, turntables, hard-copy concert tickets, a limited amount of CDs, and some live, in-store performances. We’re currently cleaning it up, painting, and putting in a new floor. Our goal is to fit in with the neighbourhood.”

That fit-in attitude has been resoundingly successful for Red Cat at the Main Street location, which is often packed. Bucking the High Fidelity record store cliché of clerks looking down on or belittling their customers has been a major part of Red Cat’s prosperity.

“From Day One we have always wanted people to feel welcome when they come in the store, a place where no one is left out,” says Dave. “I’ve always been against that indie-record-store-with-attitude thing. It’s something we work very hard on avoiding. We have a friendly and helpful staff. It doesn’t matter if you’re 10 or 82. If you want something that we don’t have in stock – be it jazz, new country, or rock ‘n’ roll – we’ll order it and we’ll get it in really quickly for you.”

Like any great team leader, Gowans is repeatedly heaping praise on his staff. “We wouldn’t have been able to pull off a second store if it wasn’t for them. We have a really strong crew.” Some, like musicianFord Pier,have been with Red Cat for close to a decade. Evan McDowall, another long time employee, was instrumental in securing the second space.

Thanks to Red Cat, the records will keep spinning on East Hastings Street.