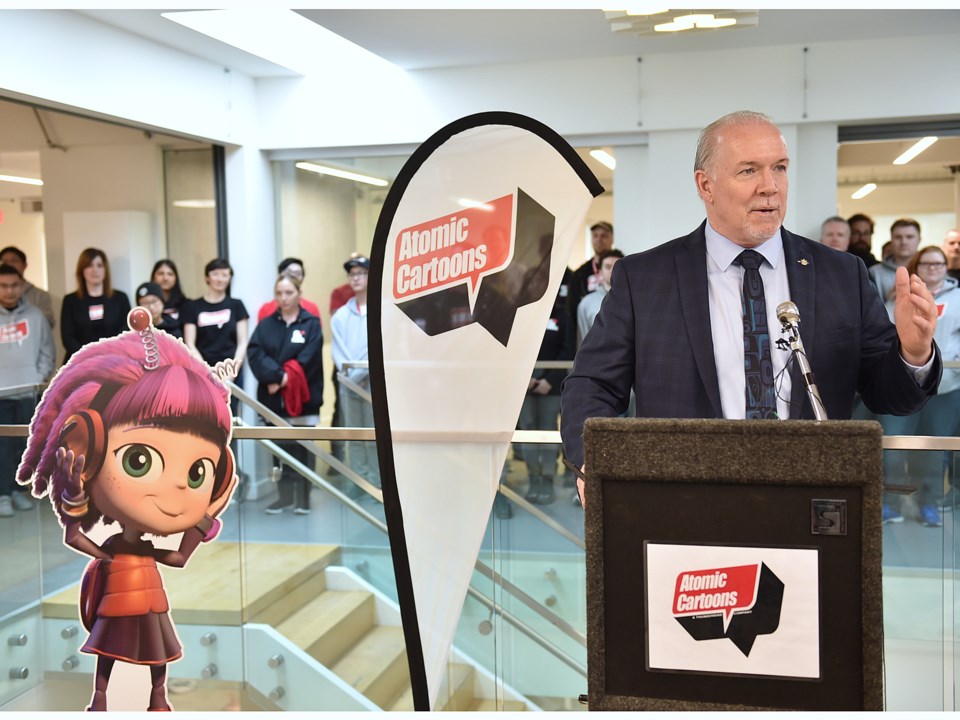 B.C. Premier John Horgan paid a visit March 19 to Vancouver’s Atomic Cartoons for the opening of the company’s new headquarters.

The animation studio takes over the space at the corner of West Seventh Avenue and Manitoba Street, previously home to local fashion house Kit and Ace.

Horgan said it was exciting that Atomic Cartoons has grown to a 400-strong operation, warranting the expansion from a smaller space a block away. He also said the Lower Mainland’s creative industries have an “enormous impact” on B.C.’s economy, employing some 90,000 people.

Horgan mentioned housing affordability in Vancouver as it relates to young professionals and what the young crowd can expect from his government.

“We’ll do our best to make life a little more affordable for you,” Horgan told the animators without going into detail how the NDP plans to do so. “I know you like to find a place to live and we’ll work hard on that.”

Lisa Beare, Minister of Tourism, Arts and Culture, was also in attendance and praised the company’s success and growth over the past years. After their brief statements, Beare and Horgan pretended to cut a ribbon with their index and middle fingers to symbolize the official opening of the new building.

The premier and the minister were not available for media questions afterwards.

Dan Langlois, a production coordinator for Atomic Cartoons, lives in East Vancouver and said affordability is “tough.” The 30 year old pays $1,900 a month for a one-bedroom apartment and would love to see more affordable housing in Vancouver, which he said would also be good for the local economy.

“I would love to own a house or a starter condo, something like that would be great,” Langlois said. “It’s kind of unachievable right now, unfortunately, for us in the city.”