B.C. Liberals introduce legislation that would change how business properties are taxed 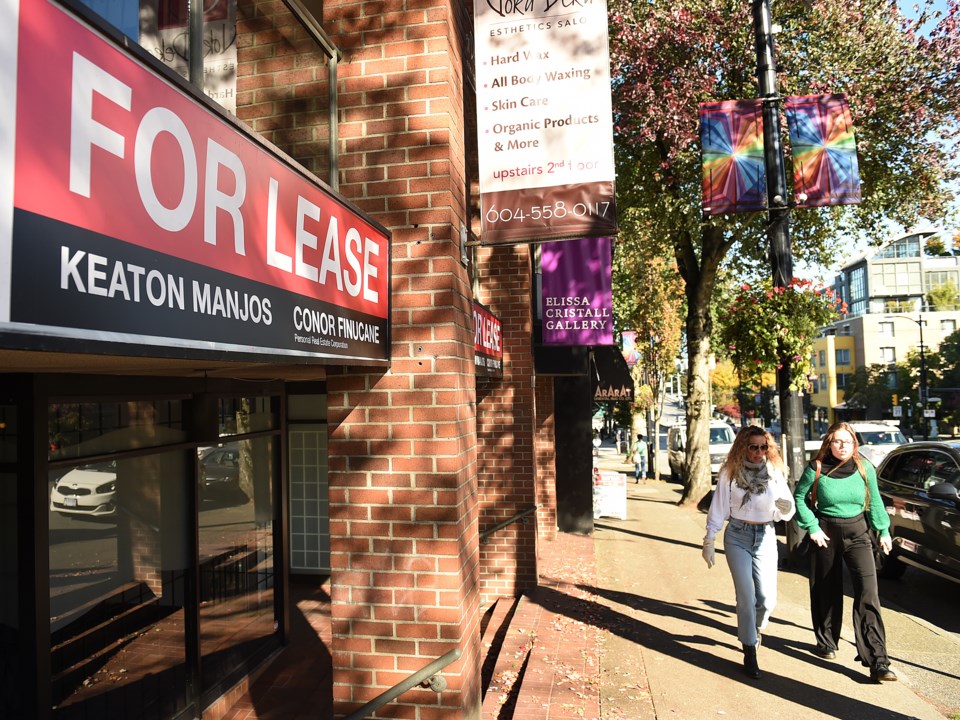 The Courier recently counted 25 for lease signs on South Granville, as businesses close due to massive property tax increasesDan Toulgoet

The single largest impediment to the survival of Vancouver’s small business, non-profit and arts sectors could soon receive a dramatic lifeline that’s been called on for years.

The move would create a separate new tax class, which would separate tax levels based on a structure’s current use versus its potential future use.

The current model sees properties’ taxes based on a “highest and best use designation,” which allows property values and subsequent tax bills to soar by upwards of 200 per cent.

“The feedback that we’re receiving is that the impact of property tax escalation through triple net lease agreements is rapidly becoming the biggest pain, the biggest chunk of added cost,” Stone told the Courier in an interview. “When you talk to business owners, they say to me ‘This is the final straw that broke the camel’s back.’”

To put the current tax reality into perspective, imagine a one-storey building located in a neighbourhood that allows zoning up to six storeys.

Even though that plot of land has a one-storey building on it, it is taxed on the potential that it could one day be home to a six-storey structure and other development trends in the area.

Another example: a six-storey, mixed-use development. The first floor is a florist, while the remaining five storeys are slated to be residential. Those five storeys of future residential are taxed at commercial tax rates, which, in Vancouver, are roughly four times higher than residential.

That system allows for widespread property speculation, where developers can, in theory, raze entire blocks waiting for market conditions to change.

Stone said the potential change does little to the B.C. Assessment Authority other than the addition of a new property sub class, while local governments would ideally set mill rates at a rate far less than the commercial rate for a parcel of land.

If approved, the legislation would be entirely voluntarily — municipalities can opt in or out. The “highest and best use” notion would remain in place and local governments could then apply much lower tax rates on that vacant or underutilized air space on the property.

“There is maximum flexibility built into this,” Stone said.

Stone is hopeful the bill passes before the end of October so the changes can go in effect in time for 2020 tax rolls.

That’s asking a lot, as private members’ bills rarely receive traction. Getting buy-in from all parties in under seven days is a huge ask.

Municipal Affairs and Housing Minister Selina Robinson told reporters Wednesday that the NDP is working on both interim and long-term solutions, hinting that some relief will be forthcoming for the 2020 tax year.

“I’m absolutely concerned about this,” Robinson said. “This has been a growing issue because of out-of-control real estate prices that the previous government ignored. It’s been building over time and they ignored it.”

Stone’s response to that claim:

The split assessment model has the backing of a huge swath of policy makers: chief financial officers from Vancouver, Burnaby, Coquitlam, North Vancouver, Richmond, Surrey and West Vancouver. It’s also received support from the Lower Mainland Chambers of Commerce and Boards of Trade and the B.C. Chamber of Commerce. Several resolutions on the issue have received support from the Union of B.C. Municipalities.

Aaron Aerts is the western economist with Canadian Federation of Independent Business (CFIB) and focuses his work on B.C. The CFIB conducted a study earlier this year that suggests 54 per cent of respondents are considering moving or closing their Metro Vancouver businesses due to property tax increases.

The same study five years yielded a response rate of about 25 per cent.

“I talked to one business owner in Gastown who said he’s been at his business for five years, putting in 80 hours a week and he’s finally starting to see some profit,” Aerts said. “He was hoping to scale back. He had to go back to day one because he had such a huge increase in property taxes that it had eaten away any sort of progress he had been making.”

Both Stone and Aerts said the problems plaguing Metro Vancouver aren’t ravaging other areas of B.C. yet, but the precursors are there.

“In five or 10 years this is going to be a huge story in Kelowna and Greater Victoria,” Aerts said.