You wouldnt expect laughter in the living room of a family affected by eating disorder, yet its bouncing loudly off the pale walls.
Oct 9, 2013 9:00 PM By: Vancouver Courier Staff 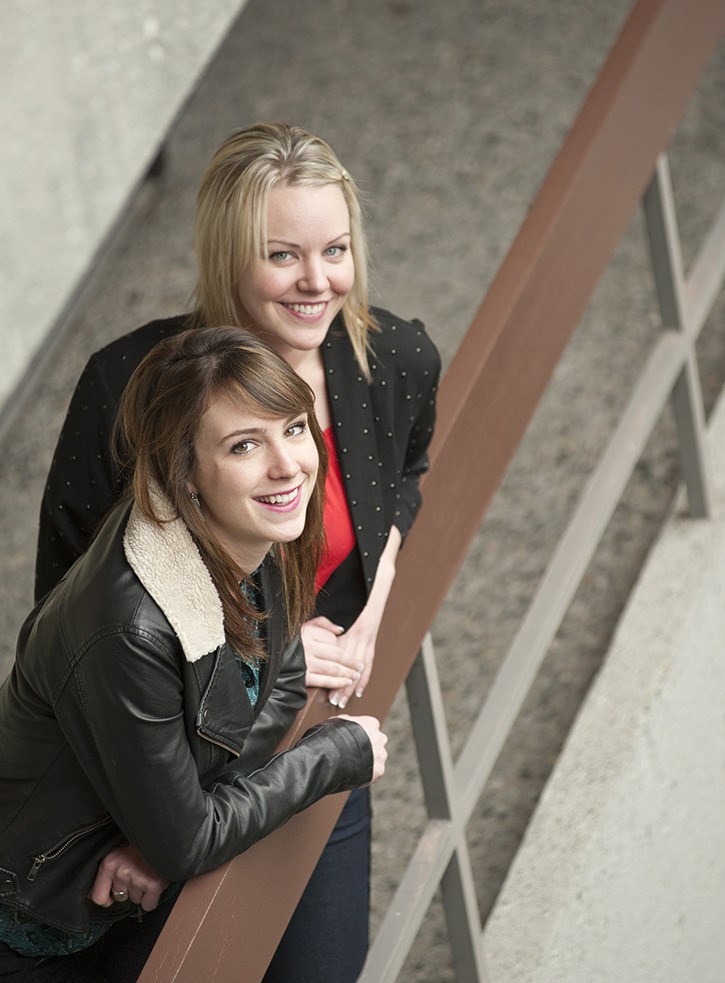 You wouldnt expect laughter in the living room of a family affected by eating disorder, yet its bouncing loudly off the pale walls.

Sisters and roommates Melissa, 23 and Amy Quinn, 27, are seated next to each other one on a stool, the other on the window seat of their Burnaby basement suite. They blush when it becomes apparent how loud their parents, Gerry and Nicky, have to speak to be heard from where they are seated, on a couch far across the room.

Everyone laughs as they apologize, and then the story of Melissas survival begins.

A go-getter from birth, Melissa excelled at sport. By grade eight, soccer had emerged victorious, leaving dance and figure skating in a spangly heap.

Her family was a busy 21st century paradigm: Amy had a job and Melissa played soccer at night. Dad worked in construction and mom as an office manager. Dinners couldnt always be eaten together; the sisters werent overly close.

So when Melissa graduated in 2008 and moved to Victoria to play varsity soccer, the family vowed to make an effort to better keep in touch.

But constant contact didnt prepare them for a first semester phone call from Melissas coach, saying their daughter couldnt play soccer any more. Her eating disorder had taken that away from her.

Melissa was in full denial, but on her last day as a University of Victoria Vike the day she was officially deemed too weak to play she had eaten the equivalent of half a piece of fruit, some celery sticks and a spoonful of tuna.

For the team coach, it wasnt the first time she had been forced to make that phone call. For Melissas parents, the suspicions were all but confirmed when their formerly fit 18-year-old daughter came home in November, gaunt and 30 lbs lighter.

Just beginning to grapple with a disease that had been secretly seducing their daughter since she was 14, the family was set adrift in a sea of best practices: Privacy was a forgotten privilege as someone stood by the open door each time Melissa went to the bathroom; every dinner was taken together; they went for nightly walks to distract her from her obsession. Yet her condition rapidly worsened.

She would find ways to be sneaky and manipulative, and believed everybody was trying to make her fat. By May, Melissa was dying.

After months of electrocardiograms, blood work and waiting for her to be medically sick enough, her doctor advised them to rush her to the hospital. Melissa wanted to go to her dentist appointment and go home.

Her heart rate was 22 beats per minute; her parents were terrified. In the hospital waiting room, two ambulance drivers and two nurses with a crash cart never took their eyes off her. Melissas organs, memory and speech were failing.

Gerry took two months off work so he and his wife could spend shifts with Melissa through that first hospitalization. They were quickly becoming experts on the disease insiders nickname Ed.

Melissa was in Langley Memorial for a month, St. Pauls for eight, Vista House for another four, and then she attempted to go back to school.

It wasnt long before she relapsed, however, and found herself in a Victoria psych ward for seven months, under the care of Dr. Cliff Duncalf.

I was so anxious to go back to school that I did everything in a rush, Melissa says, somberly. I thought [the eating disorder] was just slowing me down; I was ticked about it. Until I saw Dr. Duncalf and realized that this was my life.

Eventually, she was given a choice: back to St. Pauls, or off to Woodstone, a new residential treatment facility the first of its kind in Canada.

She didnt want to return to St. Pauls. While it had saved her life once, she had seen people there for their third and fourth times and it scared her. She couldnt picture it being any different for her.

And her parents were skeptical every time Melissa had been far from home, she had gotten worse. But they had seen progress under Dr. Duncalf, and trusted his advice. So they placed all their faith in a facility that hadnt even opened yet and Melissa became one of the first 10 patients to check into the Looking Glass Foundations tranquil Woodstone retreat.

Our mantra was, Would you leave your child here? says Looking Glass Foundation president and co-founder Deborah Grimm.

Grimm and two others Dolores Elliott and Cindy Dobbe whose daughters had eating disorders, had all been forced to send their children out of country for treatment. At an expense of $1,200 to $2,000 a day, some even had to mortgage their homes to do so.

They came together to create a level of service that didnt previously exist in Canada, and formed the Looking Glass Foundation in 2002. It began with summer camps and support groups, and in 2010, grew through fundraising to include medically supervised, round-the-clock residential care.

We finally found a beautiful property on Galiano Island, which had formerly been an inn. We had raised enough money that we were able, with assistance, to buy it. All the way along we were trying to have a conversation with the government. Eventually, a relationship was created and the light bulb went on. Everybody could see that this was a win-win. We started with 10 publicly funded beds with the knowledge that there would be 10 out-of-province and other funded beds down the road. Were in that process of expanding our services.

Eating disorders have the highest rate of death of all mental illness, Grimm cautions. Were a hand to hold in the moment youre trying to find your way.

Having completed the program in September of 2011, Melissa is now two years recovered.

While the competitive environment of university-level soccer is what propelled her disorder into overdrive (your push ups are numbered, your sit ups are numbered, and your timing is known to everyone), it began slowly and insidiously, years earlier, around body image issues, fad diets, graduation. Melissa turns to Amy and admits for the first time that it was also partially wanting to be like her beautiful, skinny older sister.

The triggers are personal and, in some cases, chemical, the disorder rooted not in aversion to food, but rather serving as a quick fix for an under-stocked emotional toolbox.

I know I can be anorexic and I know where that gets me and not being like that is still really scary. As much as Ive been out of treatment, its still hard, the thought of being completely... normal?

She avoids mirrors and goes to therapy twice a month (sometimes once a week when she starts feeling the call of Ed), but shes working at a restaurant part-time something she never thought shed be confident enough to do again and studying business at SFU.

And shes gone back to Woodstone a number of times to speak at the house. Im so passionate about it because I never had that. Being in St. Pauls and seeing the people who were there again and again You never see the people who get out. Thats why I felt so negative about it a lot of the time it was either youre in the hospital or youre dead. No one lives with an eating disorder, right? [But] you can get better and live a normal life. Its not rainbows and butterflies, but its possible.