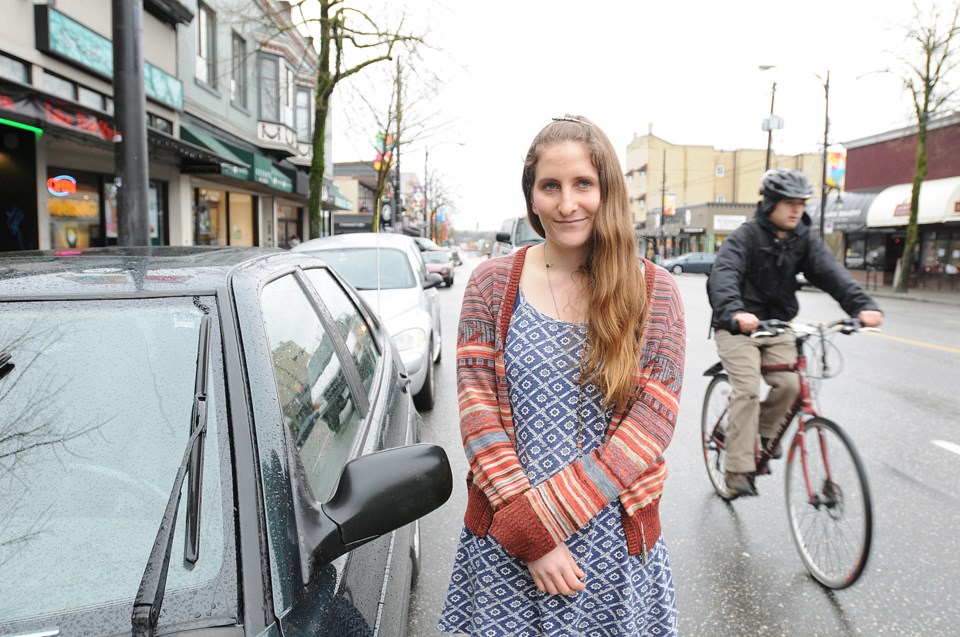 A community group wanting to reduce the “car-centric” character of traffic on Commercial Drive discovered that controversy tends to follow the mention of bike lanes.

The Commercial Drive Action Group had its first meeting last week and although different topics were discussed, bike lanes on the Drive was the most contentious.

The group’s organizer, Sarah FioRito, who is a member of the city’s active transportation policy council, stressed that bike lanes weren’t meant to be the main focus of the meeting. She said the group wants to make the area’s streets and businesses accessible to cyclists and pedestrians as well as motorists.

“We are concerned about allocating the space to make it inclusive to all modes of transportation,” FioRito said. “Right now the design of Commercial Drive is very car-centric.”

According to the city’s Grandview-Woodland community profile, 50 per cent of residents either walk, bike or take public transit to work. FioRito said 12 per cent are cyclists.

FioRito said she was impressed with the response from the meeting’s participants but noted that with roughly 27,000 people living in the area, not everyone will be on board with their suggestions.

“We recognize that this topic in this city seems to be very controversial and we understand that it gets people riled up, but we are looking to really make sure we are allocating our public space to reflect how people get around in this neighbourhood,” said FioRito.

The group hopes that by involving as many people as possible in the discussion, it can get away from the often “politicized and controversial” nature of debate about bike lanes in Vancouver.

FioRito said she recognized that the group would receive a lot of attention but was concerned about their ideas being misrepresented.

King, who attended the group’s meeting, was surprised that the post, which he considered to be “fairly polite,” created so much controversy. He argued that the meeting was heavily focused on bike lanes and most of those in attendance were “keen cyclists.”

“One of the problems I had at the meeting, which I didn’t voice at the time, was the meeting was meant to be about the future of Commercial Drive and ended up being all about bike lanes,” King said.

Jane McFadden, executive director of the Commercial Drive BIA, said with 500 businesses residing on the Drive from Venables to East 13th Avenue,  a consistent response to bike lanes on the street would be difficult.

She said she had previously spoken with the city about the possibility of bike lanes, but the city’s plan for the area doesn’t include them.

“I can’t see the city doing anything until the Grandview-Woodland Community Plan is sorted out because it might affect it,” McFadden said. “It could end up being part of the discussion, but I don’t think a bike lane would be their priority when there is so much going on.”

This story was modified for clarification after it was initially posted March 4.