Bobcat chased up a tree by local Bernese mountain dog

Last month, in what might have seemed like a rare moment, a bobcat was caught prowling in a North Shore backyard .
Feb 27, 2018 9:40 AM By: Bob Kronbauer 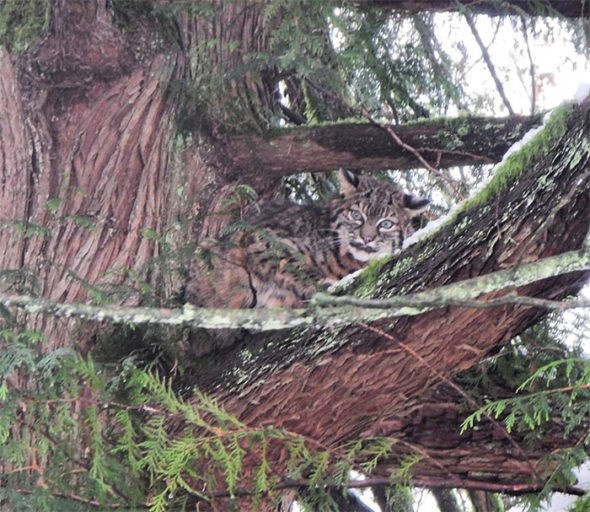 Last month, in what might have seemed like a rare moment, a bobcat was caught prowling in a North Shore backyard. However, anecdotally, bobcat sightings seem to be on the rise lately; I myself spotted one recently while on a shoot for our BC Was Awesome show the same month, and when I shared the story I heard from a few others who had seen them around.

This weekend Liam Robinson’s Bernese mountain dog, Nevada, chased one up a tree in their backyard in Maple Ridge, not far from where you turn to go to Alouette Provincial Park.

It’s the first time the pooch had ever met a bobcat, but 5-year-old Nevada has “treed” no less than 4 black bears in the last year. They converge on Liam’s backyard to collect acorns as they ripen and fall off his trees right before winter. The acorns come down and the bears go up (thanks to the dog)!

The Burnese has also been know to give chase to coyotes that make their way into the yard.

But let’s get back to bobcats! They aren’t known to attack humans, so there’s no need to panic. They do, however, eat rabbits, squirrels, deer and even porcupines. So if your dog decides to chase one up a tree you might want to call them inside.