Brandon Sutter is not a shutdown centre

The Canucks’ top two centres are set for years to come. Elias Pettersson has all the makings of a franchise forward, the type of elite, playmaking centre that every team dreams of having in their lineup.
Aug 30, 2019 7:45 AM By: Daniel Wagner 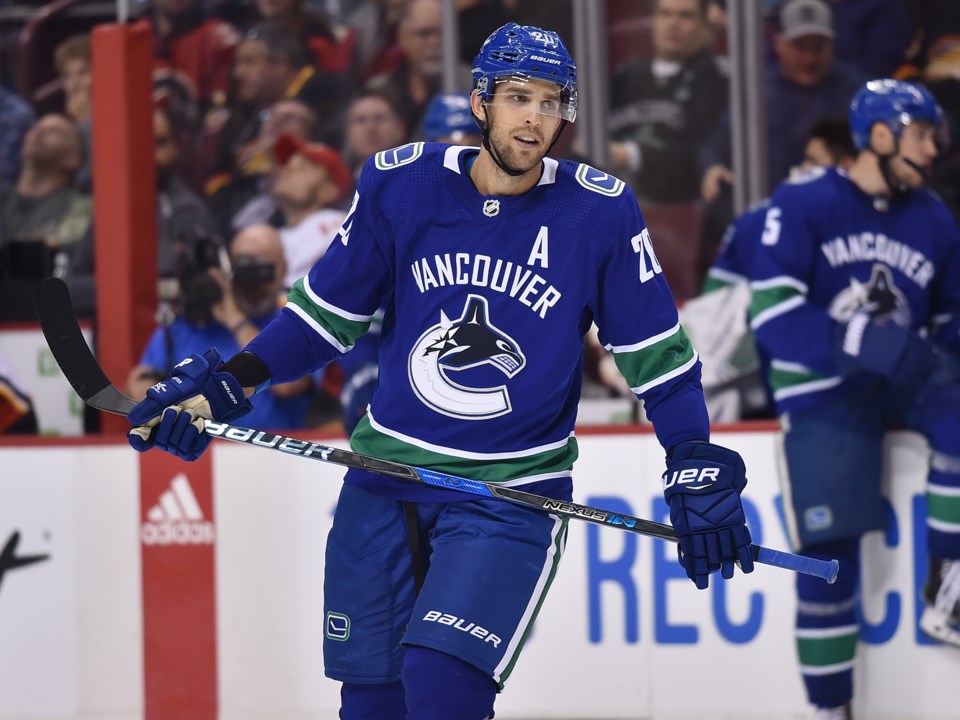 The Canucks’ top two centres are set for years to come. Elias Pettersson has all the makings of a franchise forward, the type of elite, playmaking centre that every team dreams of having in their lineup. Bo Horvat, meanwhile, has developed into a two-way force, driving the puck up ice and to the net with ruthless efficiency.

It’s the type of one-two punch down the middle that could become the backbone of a Cup contending team in the future. As pointed out by The Athletic’s Harman Dayal, Pettersson and Horvat are arguably already a top-ten centre duo in the NHL.

The Canucks’ top-two centres were 8th in combined Wins Above Replacement (WAR) using Evolving Hockey’s model last season, while Dom Luszczyszyn’s projections based on his Game-Score model ranked them 10th among the NHL’s centre duos. What remains to be seen is whether the Canucks have done enough to build around Pettersson and Horvat. After all, the NHL’s top centre duo is Connor McDavid and Leon Draisaitl, and we’ve seen what the Edmonton Oilers have done with them.

While the Canucks have upgraded their wingers and defencemen via trades and free agency, there’s a lingering question at centre: who will play behind Pettersson and Horvat?

This wasn’t supposed to be an issue. When the Canucks acquired Brandon Sutter in 2015, he was specifically described as a “foundational piece” and immediately signed to a 5-year contract extension worth $4.375 million per season.

“You win with players like Brandon Sutter,” said Benning at the time. “I’m not comparing him to Patrice Bergeron, but when I was in Boston, Bergeron was a great two-way player for us. Look at Jonathan Toews. That’s how you win in the playoffs.”

Regrettably, the Canucks haven’t made the playoffs since trading for Sutter, so Benning’s hypothesis remains untested.

At least until Brock Boeser signs a new contract, Sutter is still the fourth-highest paid forward on the Canucks and is ostensibly the team’s third-line centre. While initially deployed as a top-six forward with the Canucks, head coach Travis Green has deployed him primarily as a shutdown centre.

That means Sutter regularly starts his shifts in the defensive zone while matched up against the opponent’s first line, a thankless role that doesn’t allow for a lot of offensive opportunities. Sutter gets these types of shifts in order to shelter the team’s younger, more skilled centres, Pettersson and Horvat.

It’s not enough to be deployed in a shutdown role, you have to actually follow through on that role. You have actually shut down the opposing team and prevent them from scoring. Unfortunately, last season Sutter didn’t do much shutting down.

Among Canucks forwards at 5-on-5 last season, Sutter was on the ice for the highest rate of goals against: 3.88 goals per 60 minutes. That’s reflected in other statistics as well: shot attempts, shots on goal, and scoring chances.

To a certain extent, that’s not too surprising. You would expect someone with difficult defensive usage to give up a higher number of shots, chances, and goals. But how much higher?


The rate of scoring chances given up with Sutter on the ice at 5-on-5 was significantly higher than the rest of this group of 33 centres.

This is reflected not just in scoring chances, but in shot attempts against, shots on goal against, and goals against. In each of those statistics, Sutter was the worst among this group of players with similar zone starts.

As an extra kick in the teeth, one of the centres that performed better defensively with similar zone starts is Nick Bonino, who the Canucks traded away to get Sutter in the first place. With the Nashville Predators over the past couple seasons, Bonino has played in a shutdown role and performed well, while also scoring goals in the double digits.

You might argue that Sutter’s minutes were even more difficult because he had more difficult competition, but that doesn’t hold much water. Most of the other centres in this group were also deployed in shutdown roles, facing first lines more often than not.

Brandon Dubinsky, who shows up as an outlier in a different way, is an exception, as he was generally sheltered from difficult competition despite his zone starts. But you can look to a player like former Canuck Brad Richardson, who was deployed as a shutdown centre with the Arizona Coyotes.

Using HockeyViz’s visualization of teammates and competition, you can see that Richardson and Sutter had very similar usage. In the top right corner of each image is the opposition forwards they regularly faced: both Ricahrdson and Sutter faced the top three forwards — ie. the first line — about the same amount.

We don’t have to compare apples to oranges, of course. In Jay Beagle, we have someone that we can compare directly to Sutter.

Beagle and Sutter played on the same team, in front of the same goaltenders, with the same defenceman, while playing the same system. His usage was even more extreme, as he started more of his shifts in the defensive zone and far fewer in the offensive zone. In spite of this, Beagle was on the ice for a far lower rate of shots, scoring chances, and goals against.

While you can take issue with some elements of Beagle’s play, those issues lie more in what the Canucks give up offensively when he’s on the ice, as he provides very little at the other end of the ice. There’s no denying that Beagle was very good defensively last season. There’s also the small matter of his contract, but there’s nothing Beagle can do about that, so we can set it aside when evaluating his actual on-ice play.

What this means is that the Canucks have two shutdown centres and one of them didn’t really shut anyone down last season.

Perhaps there’s an explanation for Sutter’s struggles last season: health. After all, he missed 56 games and it’s hard to believe he was 100% for the 26 games he actually played. Sutter has a plan to stay healthier this season, as he told The Province’s Ben Kuzma: Pilates. Of course, almost every athlete self-reports that he's in "the best shape of his life" heading into training camp, so take that with a grain of salt.

“I started doing Pilates this summer which was awesome,” said Sutter, adding, “It’s all functional movement and based on the inner thigh and core. It’s just very specific for exactly what I need and now that I’ve done it, in the future I’ll do it more and spend less time lifting weights.”

Even if a healthier Sutter can bounce back from his struggles last season, there’s still the question of whether the Canucks need two shutdown lines. While Pettersson and Horvat definitely need support, the support they need isn’t necessarily to have someone else take on all the defensive responsibilities. Instead, they need the support of depth scoring.

If the Canucks already have Beagle on the fourth line as a shutdown centre, Horvat as a two-way possession driver, and the underrated defensive abilities of Pettersson, is there still a place for the one-way defensive play of Sutter?

That question is particularly pertinent if, like last season, Sutter doesn’t actually shut anyone down with his defensive game.

That leaves the Canucks with a couple other options. They could move Sutter to the right wing, where he’s played in the past, and pair him with Beagle for a pure shutdown fourth line. Unfortunately, both Sutter and Beagle shoot right, so they wouldn’t be able to split faceoff duties on their strong sides, but there’s merit in matching them up together.

Alternatively, they could explore the trade market for Sutter, which might be sparse, but has been there in the past.

Either way, the Canucks would need someone else as the third-line centre. The most likely candidate is Adam Gaudette, who is very much unproven in the NHL despite playing 56 games for the Canucks last season. The potential is definitely there, but there’s still a question of whether he’ll reach that potential.

The other option would be J.T. Miller, who was acquired primarily to play on the wing. If Sutter falters and Gaudette isn’t ready, however, the Canucks don’t really have any options at centre other than Miller. They’ll have journeyman Tyler Graovac in the AHL with the Utica Comets and technically Tim Schaller and Tyler Motte have played at centre before, but that’s not overly inspiring centre depth.

The Canucks should have the wingers to form an effective third line. Now they’ll have to either hope for one heck of a bounce back from Sutter or that Gaudette takes a big step forward in his sophomore season.

EDIT: This is something I evidently should have included in the article, because I've received some criticism that I'm cherry-picking a stat from one season with a small sample size, but this is actually part of a downward trend for Sutter. If we look at the last five seasons, we see that Sutter's on-ice scoring-chance percentage — the percentage of scoring chances taken by his when he's on the ice at 5-on-5 — has steadily gotten worse, with it dropping significantly last season.

It's certainly possible that Sutter will bounce back, but this suggests this is part of a downward trend, not just one bad season.