Brendan Gaunce wants to be irreplaceable 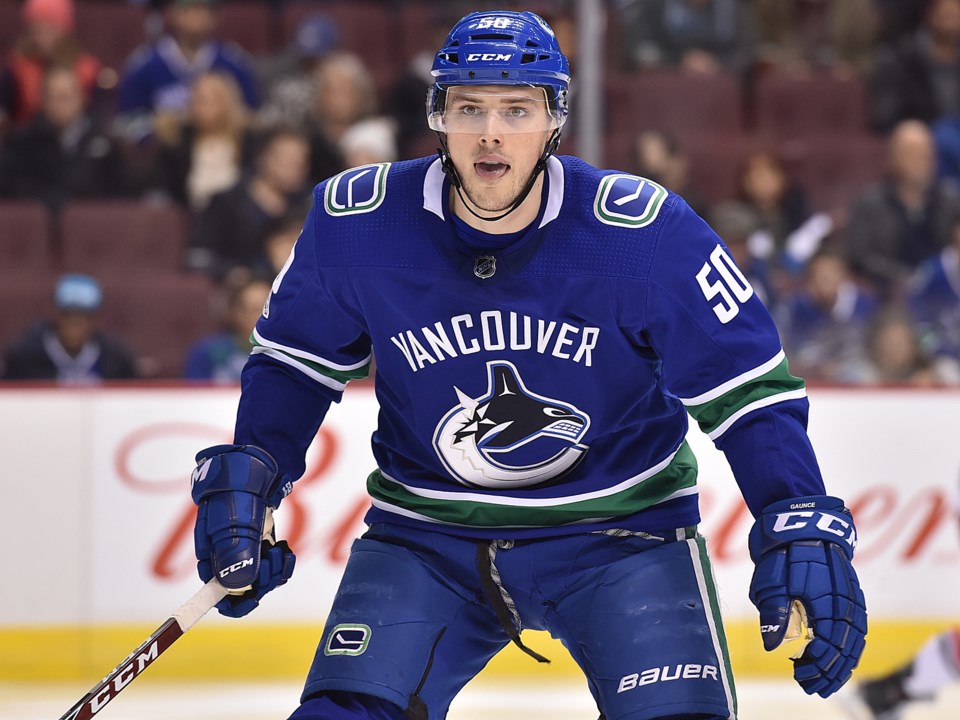 If NHL coaches had their way, every player would be a two-way, 200-foot player that can be put on the ice in any situation. A roster full of those players would be so much easier to manage than the reality of balancing a lineup full of incomplete hockey players with various strengths and weaknesses.

One of these groups of players gets a lot of leeway from coaches. The other doesn’t. This has a tendency to frustrate fans, who question why a one-way player that only provides offence gets benched or scratched, while one-way players that provide no offence whatsoever keep getting ice time.

Enter Brendan Gaunce. While Gaunce was scratched on Tuesday and will sit again against the Sabres Thursday night, he’s been a fairly consistent presence in the Canucks’ lineup this season despite just two goals and one assist in 30 games. The only forward on the team with fewer points is Nic Dowd, who has only played 18 games for the Canucks and has similar questions raised about him.

Here’s the thing about Gaunce: he plays a role in which no one expects offence. He has only been on the ice for 31 offensive zone faceoffs.

“That many?” Gaunce exclaims when I mention the number, laughing. He’s well aware that he doesn’t get many offensive opportunities.

“It’s hard to create offence in the league and so you do things for your team to win,” he adds, explaining that sometimes his job in the offensive zone is simply to get a long shot on net to create an offensive zone faceoff of which another line can take advantage.

“You can’t cheat in terms of trying to create offence when you’re job is to start in your own zone and take draws,” he says. “Sometimes you don’t stand out in a positive way, because you’re not on the good side of bounces.”

“The biggest thing for a guy that’s in that kind of a role is detailed hockey,” he adds. “It’s definitely a different role and it’s something that if you’re going to do, you have to take pride in the role you’re given.”

Defence is definitely an element of the game that Gaunce in which he has always prided himself.

“Even when I was looked on to create more offence in Utica, that was something I always kept in the back of my mind,” he says, “just in case there’s times in the NHL, like now, when you’re not looked at to create offence and you can still stay in the league because coaches like how you play.”

The truth is that coaches like player that work hard defensively more than players who only create offence. The reason is pretty simple: unless you’re one of the best offensive players in the league, you’re not creating offence every game, but defensive flaws can quickly lead to goals against. It takes a lot of offence to make up for glaring defensive flaws.

On the defensive side of the puck, players need to be able to rely on one another. It’s not just that one player making a defensive mistake causes a breakdown.

“That’s part of it,” says Gaunce, “but if you’re playing a detailed game and someone does have a breakdown, you’re in the right spot to help them out. That, a lot of the time, goes unnoticed as well.”

“It’s trusting your teammates, that if you go to be aggressive and misread something, that the other four guys are going to make up for it,” he adds.

“The path that I’m trying to go down is to be trusted defensively, which I think I have established that I am now,” he says. “I just want to be adding little parts to the game where there’s times that you can think offensively and think to score and create offence and be on that side of the puck.”

When asked what he needs to work on to get back into the lineup and stay there, he says he needs to “play a confident game, be aggressive all over the ice” and “be someone that’s irreplaceable.”

Travis Green is a lot more tight-lipped about Gaunce and Pouliot, who are both scratches for Thursday’s game.

“Play better,” says Green. “They know what they have to do, they have to play a lot better if they want to stay in every day… If they play better and are good every night, they won’t come out of the lineup as often.”

“Plus our team won 6-2 the other night, I’m not changing the lineup,” he adds.

Gaunce will certainly get his chance to get back in and, if he continues to limit scoring chances against while playing primarily in the defensive zone, he’ll swiftly be back in Green’s good graces. From there, he’ll look to progress the same way he did in the AHL: work his way up the lineup and become more than just a one-way, defensive forward.