Bo Horvat and the Canucks are thrilled to have their star sniper and friend back with the team.
Sep 18, 2019 6:07 PM By: Daniel Wagner 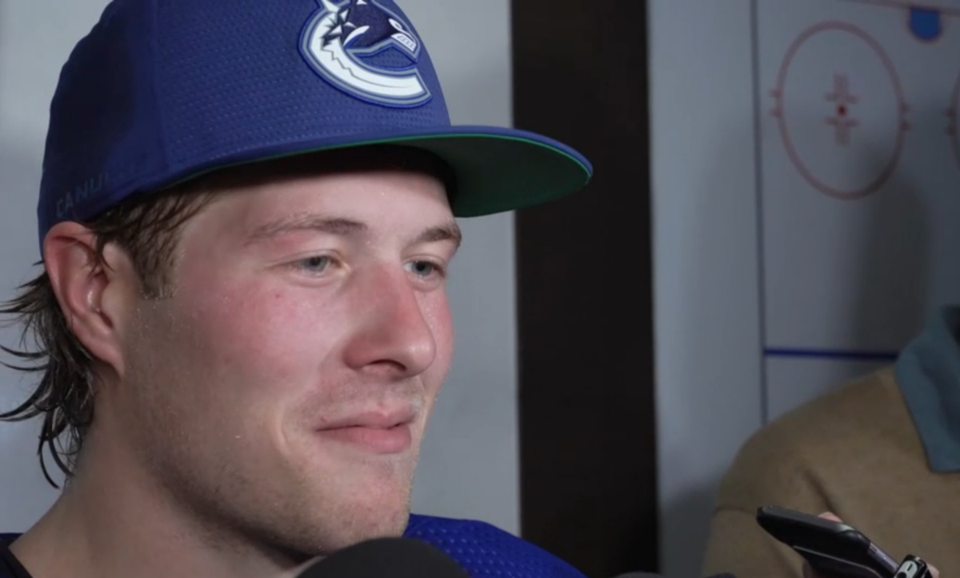 They say absence makes the heart grow fonder, and that certainly seems to be the case with Brock Boeser and the Canucks.

Boeser’s absence from training camp and the first few games of the preseason was tangible, particularly on Tuesday night. Elias Pettersson lined up with free agent signing Micheal Ferland on his left wing, but, instead of Boeser, he had Utica Comets star Reid Boucher on his right wing. That’s no slight to Boucher, who set a new Comets record for goals last season, but he’s no Brock Boeser.

For the Canucks to have any hope of making the playoffs this season, they need their star winger in the lineup right from puck-drop on opening night, so it was great to see him hit the ice for practice on Wednesday. For the players, however, it was just as nice to be reunited with a friend.

The Canucks’ marketing team caught the moment when Horvat and Boeser were reunited and it was a great moment. Boeser and Horvat embraced in a heartfelt hug before doing a little catching up. The best moment is when Boeser says he weighs 203 lbs, a little under the 208 lbs he was listed at last season.

.@BBoeser16 touched down in Vancouver late Tuesday and was reunited with @BoHorvat this morning. #Bromance pic.twitter.com/xYUUDbQSDt

If Boeser is a little leaner, that should be a good thing. One of the theories behind his somewhat slow start last season was that he gained a little too much weight over the previous off-season, making him a step slower on the ice, even if he was stronger in puck battles. Dropping five pounds to a lean and mean 203 sounds like a big positive.

One key for Boeser is that he was able to spend the whole summer training instead of rehabbing an injury. At the end of last season, Boeser talked about taking a “huge step” with an injury-free training regimen.

“Last summer, obviously, I didn’t skate until after July 4th, and that’s a long time,” said Boeser. “This year, I got to skate at the start of June, so that makes a huge difference.”

“The guy unfortunately had to go to one of his buddies’ wedding, so he couldn’t make mine, and it just shows where our friendship’s at,” said Horvat, then couldn’t keep a straight face and laughed. “He felt bad, it was one of his long-time friends, but he said he’s gonna give me a wedding present.”

“He should have sent me the wedding present before he signed his deal,” he added with a laugh, “because I’m expecting something real big now.”

Friendships forged in these types of lighthearted moments get refined in times of trial. Last season, Baertschi talked about the support he received from his teammates as he was struggling through the dark days of post-concussion syndrome.

“They’re the best teammates, man,” said Baertschi. “They’ve been unbelievable through this whole process, checking in on me every day and even when the boys were on the road, I got messages from them, guys just checking in every single day, and I never got tired of it. I was just so excited that the guys cared so much.”

Similarly, Boeser’s teammates were there for him when he was at home with his ailing father, Duke Boeser, who spent weeks in intensive care after a stroke triggered heart failure. With his father still recovering, Boeser treasured the time at home granted by his drawn-out contract negotiations.

“Even just spending that extra week, you know. He just started eating this past week and became really alert,” said Boeser. “That meant a lot to me to be there. And that’s kind of what kept me sane and going through this whole process, just being able to go see him each and every day and be there to support him.

Boeser was emotional talking about his father, visibly shuddering at one point with tears welling up in his eyes. The support he got from his teammates, whether it was text messages, FaceTime, or even Troy Stecher visiting him in Minnesota, made a big difference.

“It just shows the type of guys that are in this locker room,” he said. “We don’t got any D-bags or anyone like that. They’re all super-supportive. A lot of guys reached out with the stuff with my dad and even when we went through the contract stuff, to just check in and see how I’m doing… It goes a long way when they do that.”

The players hope that the friendships and support in the room will translate out on the ice as well as they pursue their goal of making the playoffs this season.

“We’re all friends here,” said Horvat. “We all want to see each other succeed and we’re all here for each other. I think you have to have that if you want to have a successful team. I think we have that in this room, we have a real tight-knit group, and I think that’s why, hopefully, we can have a lot of success here in the future.”