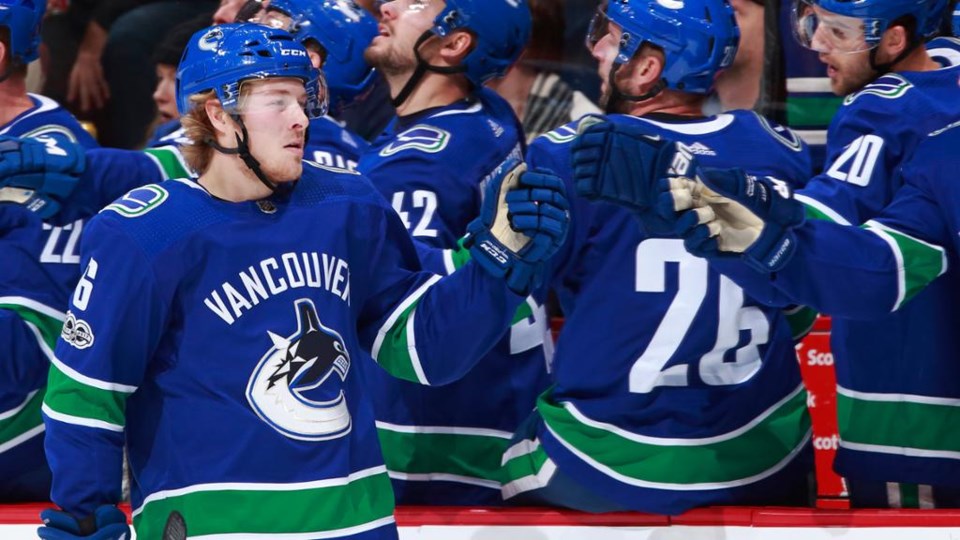 Just how good has Brock Boeser been this season? Good enough to put Pavel Bure’s franchise record for most points from a rookie in jeopardy.

Bure holds the record with 34 goals and 60 points in just 65 games, as the start of his season was delayed by court proceedings to settle with his Soviet squad, the Central Red Army. His first game was electrifying, as his breakneck speed and brilliant skill made it immediately apparent that he was a superstar.

And yet, it took some time for Bure’s rookie season to really start rolling. Perhaps it was the transition to North America, where he initially struggled with the language, but he didn’t actually start ripping things up until his 28th game.

That’s not going to last, obviously. Bure erupted for 28 goals and 48 points over the last 38 games of the 1991-92 season and took home the Calder Trophy. Boeser could potentially match that last accomplishment, but I don’t see him scoring 28 goals in 38 games.

Still, with 9 goals and 19 points in 18 games, Boeser is on pace for 40 goals and 83 points, which would break both Bure’s goalscoring and points records for Canucks rookies.

Boeser isn’t just a goalscorer or a point-producer: he’s a complete hockey player. While he’s had occasional defensive lapses, his ability to get on the right side of the puck in the defensive zone and win battles along the boards make him a useful 200-foot player. He makes excellent passes and is a dangerous player in transition with his deceptively strong skating, something that was supposed to be a weakness of his game.

But what really stands out with Boeser is his shot.

If you’re a subscriber to The Athletic, Justin Bourne has a great breakdown of Boeser’s shot that is well worth the read. I’ll just talk about a small portion of it that stood out to both me and Bourne: it’s mostly in his hands.

If you watch Boeser shoot, and watch his upper body, you’ll notice something strange: it barely moves. Almost all the movement is in his hands and arms: he generally pulls the puck in towards his body on his wrist shot, changing the angle before his release, but it’s the lack of upper body movement that makes his shot incredibly deceptive for goaltenders. They can’t read where the puck is going to go.

Is Boeser likely to continue this fantastic run? That’s a big question.

Boeser is currently rocking a 19.1% shooting percentage. That’s far from the highest in the NHL — it’s not even the highest on the Canucks — but it’s high enough that it’s not likely to last, even with his excellent wristshot.

Just four forwards played at least 50 games last season and maintained a shooting percentage above 19%: T.J. Oshie, Paul Byron, Artem Anisimov, and Mark Scheifele. That means it’s certainly possible for Boeser to continue to shoot the lights out, but it is improbable. If Boeser does manage to keep his shooting percentage that high, he’ll be bucking the odds.

So no, it’s not likely that Boeser reaches the 40 goals and 83 points for which he is on-pace, but it does make it more likely that 30 goals and 60 points is within his grasp. And, if he can do that, he has a good shot at beating Bure’s rookie record and winning the second Calder Trophy in Canucks history.