When Brock Boeser stepped into the Canucks lineup as a rookie, he was a breath of fresh air. The Canucks were having tremendous trouble scoring goals prior to his arrival: in the two previous seasons, they set new franchise lows for fewest goals.
Jan 6, 2020 10:07 AM By: Daniel Wagner 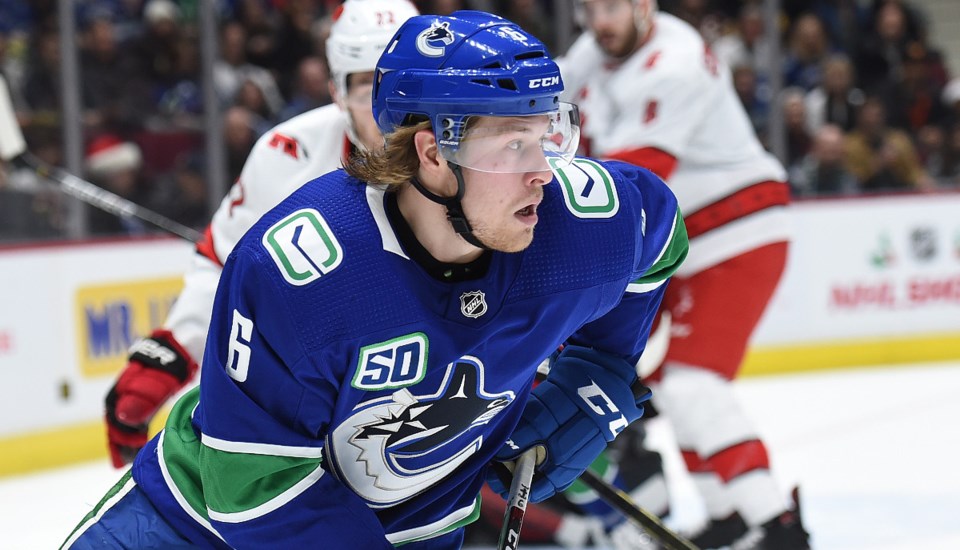 When Brock Boeser stepped into the Canucks lineup as a rookie, he was a breath of fresh air. The Canucks were having tremendous trouble scoring goals prior to his arrival: in the two previous seasons, they set new franchise lows for fewest goals.

Boeser single-handedly changed that, reinvigorating the power play and seemingly scoring at will with his wicked wrist shot. He scored 29 goals in just 62 games in his rookie year, a 38-goal pace over 82 games.

In fact, Boeser was on-pace to break Pavel Bure’s rookie records for goals and points and surely would have done so if not for his freak back injury when he was hit into an open bench door. He fell just five goals and five points short of both records, and Elias Pettersson went on to break Bure's rookie points record the following season.

Perhaps it was because the Canucks hadn’t had a rookie as exciting as Boeser since the Sedins, but the hype became unbearably high. Boeser’s stellar rookie season had fans dreaming of a future with one of the NHL’s elite snipers on the top line, regularly scoring 40 goals — or more! — every season.

Pass it to Bulis wasn’t immune to the hype, charting out an even more ambitious vision for Boeser: 50 goals in his sophomore season.

It didn’t happen, but Boeser did manage 26 goals in a season that was once again shortened by injury. He was on-pace for 31 goals over 82 games — more than respectable, if not quite the heights that fans imagined.

This season, Boeser’s goals have taken another hit. With 13 goals through 42 games, he’s on-pace for just 25 over the course of the season. This has some fans concerned about the Canucks’ “lean, mean, Petey winger machine.”

Here’s the thing: Boeser is having a fantastic season. His two-way game has improved, as has his playmaking and physicality along the boards and on the forecheck. He’s an integral part of one of the best lines in the NHL with Pettersson and J.T. Miller, and he’s third on the Canucks in scoring with 39 points in 42 games.

If Boeser were any other 22-year-old forward, fans would be crowing about the progression of his game and his development into a more complete player. But, because of the expectations created by Boeser’s rookie season, some fans are instead questioning what is wrong with the young winger. Why isn’t he scoring goals the way he used to?

Perhaps we could find the answer by looking at Boeser’s shot totals, specifically splitting them up by shot type. Let’s take a look.


What’s intriguing is that Boeser is averaging about the same number of shots per game as last season, so it’s not that he’s taking fewer shots overall. He’s also averaging the exact same number of slap shots per game as last season. Other shot types — backhands, tips, and deflections — have seen a slight increase, but in such a small sample that it’s hard to draw any conclusions.

One of the key differences between a wrist shot and a snap shot is the time it takes to release the shot. A wrist shot generally has a longer release, while players can get a snap shot off a lot more quickly. Perhaps this means that opposing teams are giving Boeser less time and space to shoot the puck, forcing him to take more snap shots than wrist shots.

Perhaps the reason Boeser’s shot looks less dangerous this season is that he hasn’t been able to really rip a wrist shot the way he has in the past, not because there’s something wrong with him, but because other teams know that’s his most dangerous weapon and have worked to shut it down.

In his rookie season, Boeser averaged 35.76 shot attempts per 60 minutes on the power play and 19.03 shots on goal. Last season, that dropped slightly to 32.93 shot attempts and 16.83 shots on goal, but he still led the Canucks in both categories. The power play, even with the addition of Pettersson, was still primarily focused on creating shooting opportunities for Boeser.

This season, that has dropped significantly. Boeser is now averaging 26.17 shot attempts per 60 minutes on the power play, below Elias Pettersson, and 15.5 shots on goal. The power play has started to share the shots around, which has been good for the Canucks as a whole — they lead the NHL in power play goals — but means fewer opportunities for Boeser individually.

When the power play has focused on creating shots for Boeser, the focus seems to be primarily to set up one-timers. This is particularly true of their 5-on-3 setup, which has generally featured Boeser and Quinn Hughes trading spots along the blue line and blasting away.

Unfortunately, the slap shot is the least effective of Boeser’s shots. In his career, Boeser has scored on 7.8% of his slap shots according to NHL.com. The only shot type with a lower shooting percentage for Boeser isn’t a shot at all: he has scored on 5.3% of his deflections, which are classified as shots that go off a body part, rather than the stick. In other words, Boeser is almost as effective at scoring off accidental deflections off his body as he is scoring with a slap shot.

Let’s make it a little more stark: Boeser hasn’t scored a single goal with a slap shot this season.

Boeser is third on the Canucks with 13 goals this season; none of those goals have been scored with a slap shot. According to the NHL’s official statistics, 23 of Boeser’s 126 shots on goal this season have been slap shots and none of them have gone in the net. If it seems like it’s been a lot more slap shots than that, it’s because that total doesn’t include blocked and missed shots.

Boeser has had more of his shots blocked this season — 50 of his 213 shot attempts — than any other Canucks forward. The only Canucks that have had more of their shots blocked this season are Quinn Hughes and Alex Edler, which is understandable, as point shots are less likely to make it through to the net. Unfortunately, we’re unable to tell how many of Boeser’s blocked shots were slap shots, as the NHL doesn’t track shot type for blocked shots.

It just doesn’t make sense for the Canucks power play to be so focussed on setting up slap shots for Boeser, as it isn’t his strength. Instead, it should be looking to create space for him to use his most dangerous weapon, his wrist shot.

It makes sense to set up one-timers for Pettersson, who has an 18.9% shooting percentage on slap shots in his career. Clearly, slap shots are a strength of Pettersson’s shooting game, though Pettersson is an excellent shooter with every type of shot.

The path to getting Boeser more goals seems clear: find ways to get him more time and space with the puck, likely on the power play, to use his wrist shot. Alternatively, the Canucks could just not fret about Boeser at all, as his individual statistics are less important than the success of the team as a whole.

If the Canucks power play is successful without Boeser racking up goals, perhaps there isn’t a problem at all.