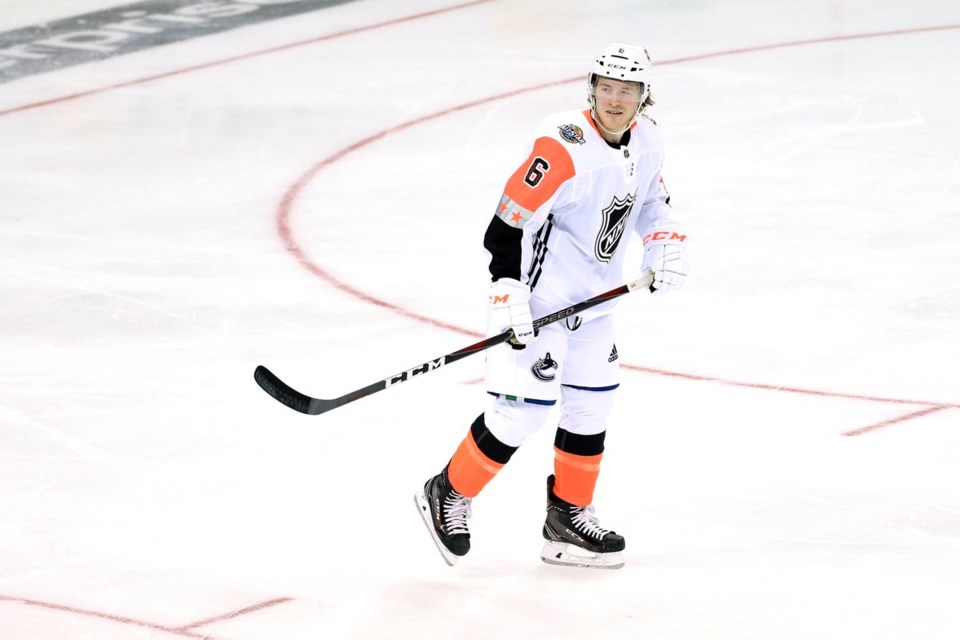 All-Star Weekend could not have gone much better for Brock Boeser. The Canucks rookie started on Saturday with a star-making turn in the Skills Competition, handily winning the Accuracy Shooting event.

He followed that up with a fantastic performance in the 3-on-3 tournament on Sunday. He scored the game-winning goal to carry the Pacific Division to the final over the Central Division, then had a goal and an assist to defeat the Atlantic Division. As a result, Boeser was named the All-Star Game MVP, an impressive accomplishment for the lone rookie on the ice.

It’s also the first time ever a Vancouver Canuck has been named the MVP of the All-Star Game.

John Garrett came close once. The Canucks’ backup goaltender wasn’t even supposed to be in the game, but came in to replace Richard Brodeur when King Richard ruptured his eardrum. Since every NHL team had to be represented and the All-Star Game needed another goaltender, Garrett was the only choice.

Improbably, Garrett was outstanding, making save after save. He allowed just one goal against late in the third period and the combination of his stellar performance and his underdog story made him a pretty good bet to win MVP.

But then Wayne Gretzky scored four goals in the third period, taking the MVP honours and the car that went with them.

So it took Boeser, the rookie, to be the first Canuck to take home the MVP award.

To be clear, the MVP award was voted on by the fans, and Canucks fans showed up on Twitter in force, tweeting and retweeting the #NHLMVPBoeser hashtag thousands of times to dominate the voting. Whether that is less or more meaningful than an MVP award decided on merit is open to interpretation, but Boeser’s performance on the ice would have put him in the running no matter what.

His goal in the first game was like a flashback to his Accuracy Shooting contest win, getting the puck in between the hashmarks and ripping the puck into the top left corner. The only thing missing was the LED target.

His goal and assist in the final game were a little less highlight-worthy, but it was still a solid performance. He finished off a Johnny Gaudreau rebound by, as per usual, being in the right place at the right time.

Then he made a great play in the defensive zone, chipping the puck past Aleksander Barkov before pushing the puck up to Gaudreau who went five-hole.

Brock Boeser wants that All-Star MVP, chips the puck and gets an assist pic.twitter.com/k0dqkEYb97

The two goals and assist may not have compared to Gretzky’s 4-goal effort in 1983, but it was still good enough to get him the MVP and the car. He's not planning on keeping the car, however, choosing to give it to his sister, Jessica Boeser, who plays for Minnesota Special Hockey, an adapted program for players with developmental disabilities. Jessica starred in a showcase game against her brother at Da Beauty League during the summer.

.@BBoeser16 said he’ll probably give the #NHLAllStar MVP car to his sister.

All told, that’s $550,000 (and a car) for Boeser on All-Star Weekend. Not bad for a couple days of fun with the best players in the NHL, who are also his peers.

Boeser may have also given his candidacy for the Calder Trophy a boost, with the Eastern media getting a viewing of his incredible shot and skill.