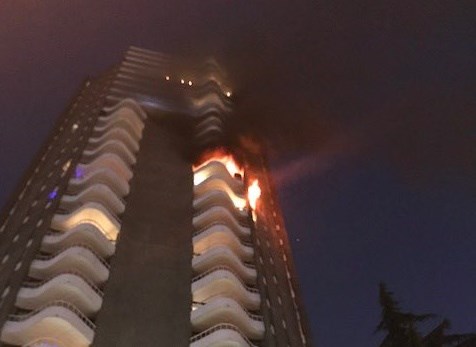 Vancouver firefighters were able to quickly extinguish a fire in an apartment building on Beach Avenue Thursday night. Photo @FireChiefReid/Twitter

The first broke out at around 6:30 p.m. in a high-rise in the city’s West End. Photos posted to Twitter show flames shooting out of one of the units in the building in the 1100-block of Beach Avenue.

Our @VanFireRescue crews have had a busy start to #Halloween - a 3rd alarm highrise fire.

Glad to report fire has been knocked down quickly!

The chief also added that no one was injured in the blaze and residents were being assisted by emergency social services.

The cause is under investigation.

Fire crews were called to two more blazes overnight. One on Alma Street where one person had to be taken to hospital; and a third on Athlone Street (near West 41st Avenue and Granville Street) that broke out early Friday morning.

Our crews continue a busy #Halloween with a working fire on Alma.

One person taken to hospital by @BC_EHS.

- With files from Canadian Press