One of the authors of the Davie Street Revitalization Report is concerned for the future of what’s become known as the Bute Street Plaza, a tiny stretch of road south of Davie Street blocked off last summer to create a pedestrian-only space.
Sep 5, 2014 11:26 AM By: Sandra Thomas 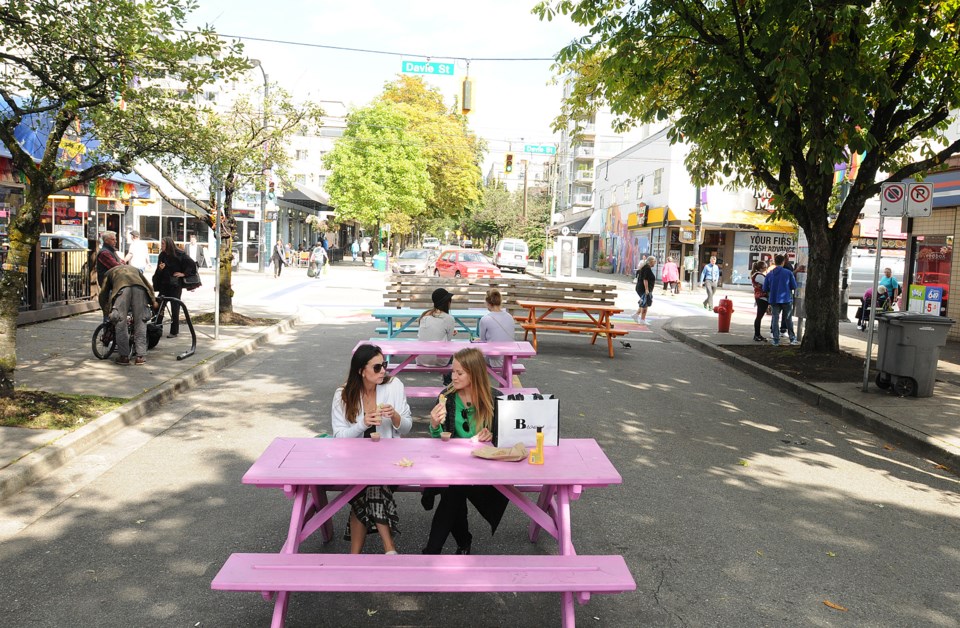 A tiny stretch of Bute Street south of Davie was closed to traffic last summer and converted into a mini park for community events and gatherings. Photo Dan Toulgoet

One of the authors of the Davie Street Revitalization Report is concerned for the future of what’s become known as the Bute Street Plaza, a tiny stretch of road south of Davie Street blocked off last summer to create a pedestrian-only space.

Dean Malone said the space, which includes several picnic tables, has become a popular meeting place for residents of Davie Village, an area known for its many apartment buildings and high density.

“There are game nights every Thursday, and we were there recently and played crib,” said Malone. “The space is perfect for it, but what it needs is funding for things like lighting so it can became a permanent park.”

Malone said not everyone wants to see that section of road closed permanently. He noted the West End Business Improvement Association has suggested the closure should be seasonal.

The short block of Bute Street was closed to traffic, up to the alley, last summer just prior to Pride Week and converted into a mini park for community events and gatherings. The move was the first of more than 30 recommendations included in the Davie Street Revitalization Report created and compiled by a subcommittee of the city’s LGBTQ Advisory Committee, including Malone and community advocates Barb Snelgrove and Ron Stipp. At the time, Snelgrove told the Courier the closure was one of the quick fixes included in the report. She noted other recommendations would take longer to implement and require more consideration and public input. The subcommittee sought input from residents, community leaders and the owners of small businesses, retail outlets, restaurants and bars, as well as organizations such as the Vancouver Pride Society, Qmunity and the West End Business Improvement Association. In January, council approved the proposed zoning needed to implement the community plan.

Malone said while city staff has been supportive of the project, a decision needs to be made regarding its future.

“Right now it doesn’t have proper lighting or permanent programming and that’s presenting some challenges,” said Malone. “Some businesses are complaining that even during daylight hours, there’s a lot of substance abuse going on there.”

Malone also heard there’s been some concern regarding street access from Vancouver Fire and Rescue, but spokesperson Capt. Carol Messenger was unable to confirm that prior to the Courier’s print deadline.

Snelgrove said the city has a survey on its website asking for input on the project and she strongly encourages anyone with an opinion to fill it out.

“Davie Village is a village and this is a much-needed outdoor space, which at this time is weather dependent,” said Snelgrove. “Having said that there are many options, including awnings that could make the space useable all year long.”

Stephen Regan, executive director of the West End BIA, said while he is a fan of the space a plan to make it a permanent feature is not a simple one.

“It’s complicated,” said Regan. “For it to become permanent we need the plaza to be well designed with fire access and have permanent programming and maintenance.”

Regan also wants people to respond to the survey.

“They need to share their voice so that park remains a park.”

To find the Davie Street Plaza survey search for the West End Community Plan at vancouver.ca. The last day to respond is Sept. 14.