Buyer out $524 after trying to buy illegal cannabis online from B.C. business 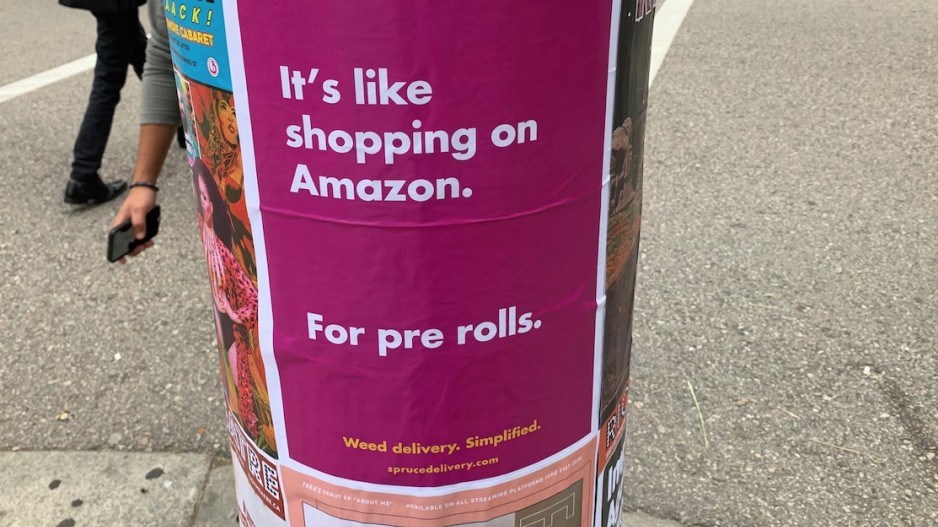 A poster advertising black-market cannabis sold online was on a traffic-light pole at the corner of Davie and Howe streets during the summer of 2019. File photo Glen Korstrom/Business in Vancouver

What happened: Someone bought $524 worth of cannabis products from a private online business in B.C. — something that is illegal — and when the buyer did not receive their products or a refund, the buyer lodged a complaint with the Better Business Bureau of Mainland B.C. (BBB)

Why this matters: The case shows that consumers are either willing to be open about flouting the law, or ignorant about which cannabis businesses are legal in the province and which ones aren't, while simultaneously standing as an example for how little recourse consumers have when they engage in illegal transactions.

Buying cannabis from the B.C. government’s e-commerce site may be more expensive than buying from black market dealers in cyberspace but the case demonstrates that it is a safer option because there is more oversight.

The customer alleges in the complaint that he or she spent $524 to buy cannabis from Bud Express Now on Nov. 17.  The customer's name was redacted when the BBB forwarded the complaint to Business in Vancouver.

Three days after the initial purchase, Bud Express Now allegedly emailed to confirm that the order was complete and it provided a Canada Post tracking number.

After a two-day wait, the customer contacted Canada Post, which relayed that it had yet to receive the package.

“Since then I have emailed Bud Express Now numerous times inquiring into the status of my order,” the person wrote in the complaint. “I received numerous responses to those inquiries ranging from, ‘We are looking into this ASAP,’ and ‘shipping management’ had been contacted and ‘[we] will have this matter resolved ASAP,’ to, they’re ‘not sure why the tracking number is not working,’ and ‘the warehouse will resend the order tomorrow.’”

The customer claimed that after much frustration, he or she asked for a refund. Bud Express Now allegedly initially agreed to provide that refund but then did not provide the refund and stopped returning emails, according to the complaint.

The BBB tried on its own to resolve the situation by contacting the company but the BBB said on Jan. 10 that its attempts to get a response, which started on Dec. 29, were not successful.

BIV sent the Bud Express Now an email on Jan. 10 to find out the business' side of the story but the email was not immediately returned.

“When you’re dealing with businesses that are not legitimate, you run a serious risk,” said BBB spokesperson Karla Laird.

“They are not abiding by an order, or by rules, because they are not even under the rules to begin with. They are operating outside of that. The umbrella of protection that you would get as a consumer, if they were legal, you don’t have that.”

Customers could take retail businesses to small claims court, although many people could view the amount time required to potentially be awarded $524 to be not worth the hassle.

Consumer Protection B.C. has some enforcement powers when it relates to licensed businesses, such as crematoriums, payday lenders, telemarketers or travel agents. Sometimes it levies fines.

Given the lack of responses from Bud Express Now, the company may have been shut down.

Solicitor General Mike Farnworth, told BIV in an exclusive interview in July that he has spoken with federal officials about shutting down black market sellers of cannabis online.

“The feds are aware of [black market cannabis e-commerce sales,] and they are illegal, and the feds have indicated from my conversation with them that they will be looking at a number of ways of dealing with this right across the country,” said Farnworth, who is in charge of policing in B.C. but does not get involved in operational decisions. Instead he sets policies and regulations, and is involved with his government peers in changing laws related to how police do their jobs.

The B.C. government is working with the federal government to try to shut down black market cannabis sales online because many of those enterprises accept credit cards, and banking is federal jurisdiction, he added. He declined to say exactly who the federal officials were who he spoke with, or if they were in the RCMP.

“There are a number of ways in which you can deal with [black-market online cannabis sellers,]” he said last summer. “There are sting operations.”