Can Ryan Miller carry the Canucks to the playoffs?

Ryan Miller has never won the Stanley Cup. He’s never even made it to the Finals. His two best chances came early in his career, as he helped carry the Buffalo Sabres to the Eastern Conference Finals in his first two full seasons in the NHL.
Jan 26, 2017 1:06 PM By: Daniel Wagner
Previous Next
1 / 1
Expand
Previous Next

Ryan Miller has never won the Stanley Cup. He’s never even made it to the Finals. His two best chances came early in his career, as he helped carry the Buffalo Sabres to the Eastern Conference Finals in his first two full seasons in the NHL.

What an expectation that must have created for him: we’ll be good every season! Instead, the Sabres missed the playoffs in five of his next seven seasons. At the trade deadline in 2014, the Sabres sent him to a contender, the St. Louis Blues, but it all went disastrously wrong, as he posted an ugly .897 save percentage for the Blues as they lost in the first round.

You have to wonder if Miller is thinking about whether he can win a Cup before he retires. He’s 36 years old, on the tail end of his career in a position that isn’t friendly to the hips and knees. Is the idea of a trade to a contending team in the back of his head as he toils in net for the Canucks, who are not particularly good?

Here's the thing, though: the Canucks just keep picking up points, dragging themselves up the standings like an emaciated, legless zombie. Their win over the Colorado Avalanche vaulted them over the Calgary Flames and into a wild card spot. And the biggest reason why is Ryan Miller.

Miller has been outstanding over his last ten starts, with just one blip against the Philadelphia Flyers, a game that he still took into the shootout to give the Canucks a point. He’s given up just 17 goals in those ten starts, with two shutouts.

Miller’s save percentage in those ten games is a superb .947. His save percentage at 5-on-5 is even more sparkling: .960. While you could question whether Ryan Miller is still an elite goaltender, the fact is that his performance over the last ten games has absolutely been elite.

You might be wondering, however, why I keep emphasizing the last ten games. Sure, it’s a nice round number and it lines up with the Canucks’ recent run of success, but it’s mostly because Miller was mostly very bad up until that point.

If we look at Miller’s even-strength save percentage throughout the season using a rolling ten-game average, the difference from the start of the season to now becomes stark. 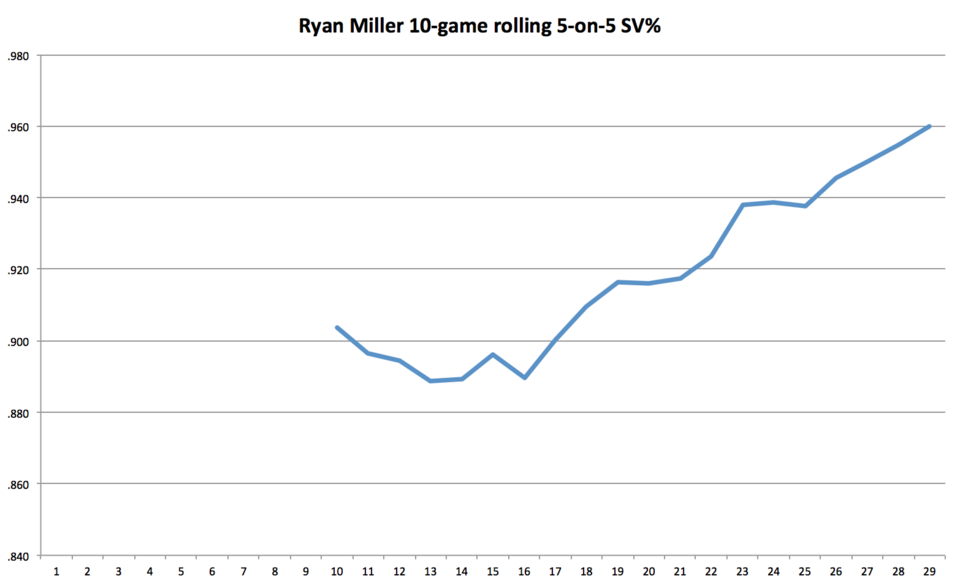 There are exactly 50 goaltenders who have played at least 500 minutes this season. Ryan Miller is 23rd among those goaltenders, putting him at just above average for the season as a whole.

The average 5-on-5 save percentage among those 50 goaltenders is .923. You can see from the chart that Miller is well below that average for most of the season, but has been well above average over the course of the last ten games. In fact, in the last ten games, he’s been in the top tier of goaltenders in the NHL, with the likes of Carey Price, Devan Dubnyk, and Braden Holtby.

The question is whether Miller can continue his elite level of play. His .960 save percentage at 5-on-5 over the last ten games is likely unsustainable through the remainder of the season. Devan Dubnyk has the best 5-on-5 save percentage in the league right now at .946 and the best in the NHL last season was .941.

Playing near that level — a .940 save percentage at 5-on-5 — might be attainable, however, and it might be enough to take the Canucks to the playoffs, particularly if Jacob Markstrom can continue to play at a league-average or just above.

That raises one last question: should the Canucks consider trading Miller? His strong level of play of late, pending UFA status, and desire for a Cup run make him an interesting trade chip. The biggest issue may be the lack of teams with a need in net at the trade deadline.

One of the few teams looking for a goaltender will likely be gun shy when it comes to Miller: the St. Louis Blues. I have to think reacquiring Miller would not be a popular move there.

After the Blues, what potential playoff teams would be looking for a starting goaltender? The Dallas Stars? The Los Angeles Kings with Jonathan Quick out until March? Those are the only two teams that immediately come to mind; both are below the Canucks in the standings. Maybe there are some other teams who might be interested, but there are also several other goaltenders on the market. Would the return be worth it for the Canucks?

At this point, the Canucks may be best served by holding onto Miller, making a push for the playoffs, then possibly re-signing him for another year, giving Thatcher Demko another year of development in the AHL.