Can the trickle-down effect give the Canucks a more effective third line? 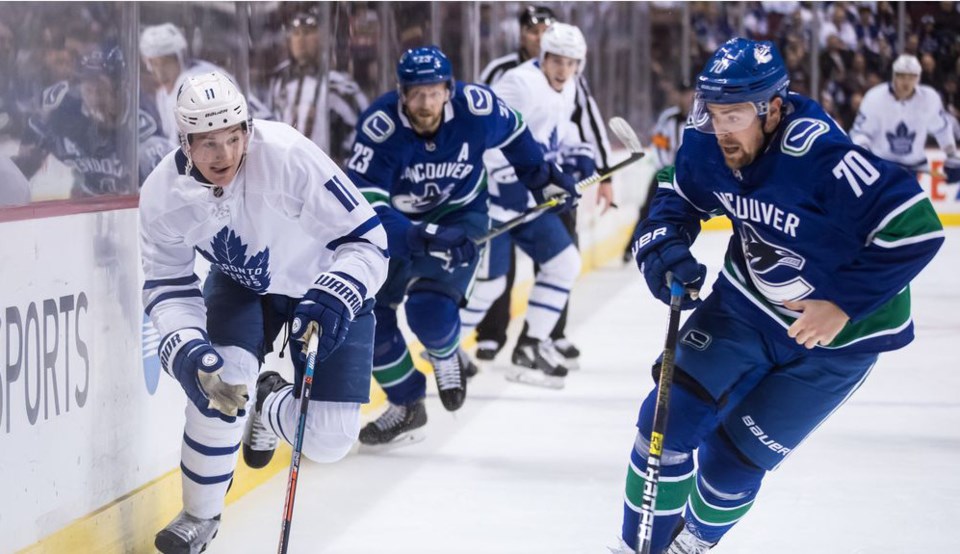 That’s not the way the Canucks have been building their roster over the last few years. General manager Jim Benning has spent big on bottom-six forwards, dating back to the 2015 trade for Brandon Sutter. Last year, in free agency, Benning signed Jay Beagle, Antoine Roussel, and Tim Schaller for a combined $7.9 million. Even Loui Eriksson, initially signed to be a top-six forward for $6 million per year, has found himself sliding into the bottom six.

The intent is a sort of trickle-up effect: the experienced veterans would play the hard defensive minutes, giving the more skilled young players sheltered minutes to create offence.

“We wanted to make sure the rest of our lineup was stable,” said Benning last year after signing the three veteran free agents. “That they had the support from a penalty-killing standpoint, from a matchup standpoint where [head coach Travis Green] could play these players in roles that they can be successful in.”

It didn’t exactly work. Centres Sutter and Beagle suffered injuries that took them out of the lineup for extended stretches, forcing Bo Horvat into more of a defensive role. Instead of struggling, Horvat thrived, suggesting he didn’t have to be sheltered in the first place. Elias Pettersson, as well, has a solid defensive game to go with his elite offensive skill.

When Horvat and Pettersson weren’t on the ice, the Canucks got crushed. The Athletic’s Harman Dayal found that the Canucks’ bottom-six got out-scored worse than any other team’s bottom-six in the NHL. They were out-scored by 0.96 goals per 60 minutes of 5-on-5 ice time, digging a hole from which the Canucks’ young skill was unable to extricate itself.

Instead of supporting the youth, the Canucks’ veteran bottom six provided too shaky a foundation for the team to succeed.

The Canucks’ roster construction over the last few years also runs contrary to how most top teams put together their lineup. The hard and fast division between an offensive top six and a defensive bottom six has disappeared, with the best teams running at least three scoring lines and often stocking their fourth line with players that have a dash of offensive skill as well.

Instead of charging a third line to be a checking line that matches up defensively against the opponents’ best forwards, top teams tend to expect offence out of their third lines. Meanwhile their first and second line to match up against the best the opponent has to offer and win, or at least battle to a draw and allow their better scoring depth to win the day.

Heading into the 2019-20 season, however, the Canucks might finally have enough top-end talent for some of it to trickle down to a scoring third line. Dating back to last season, the Canucks have added Josh Leivo, Tanner Pearson, J.T. Miller, and Micheal Ferland, while also discovering some potential top-six upside in Roussel.

Though a couple of those players came at a high cost, it is an infusion of talent into the top two lines that will leave a surplus of wingers. A couple of the new wingers could wind up on the third line, or incumbent wingers like Sven Baertschi, Jake Virtanen, and Nikolay Goldobin will get bumped down to the third line.

With those offensive wingers at Green’s disposal, he should be able to move from a checking third line to an offensive third line to add some depth scoring behind the top two lines. The question then becomes which centre will play with those wingers.

Both Sutter and Beagle are more defensively inclined, but Sutter has shown offensive upside in the past, primarily off the rush in transition. The other option would be to move Sutter to the wing on a checking fourth line with Beagle and groom Adam Gaudette for the third-line role in his sophomore season. Gaudette experienced some growing pains as a rookie, however, and is as yet unproven at the NHL level.

The wildcard is J.T. Miller, who can play centre. While he was acquired to play on the wing with Pettersson or Horvat, it’s possible that the Canucks will need him to centre the third line at some point during the season, and that might be where he can do the most good.

For the Canucks, the role of third-line centre might be the biggest question mark heading into the 2019-20 season.

A tap of the stick to Mike Kelly at the NHL Network, who suggested that the Canucks’ Quinn Hughes is more likely than his younger brother, New Jersey Devils’ first overall pick Jack Hughes, to win the Calder Trophy in the 2019-20 season.

A tap of the stick to the NHL for taking a progressive approach with Evgeny Kuznetsov, who was suspended from international competition for four years by the International Ice Hockey Federation for testing positive for cocaine. The NHL, instead of suspending Kuznetsov, is working with him via the league’s education and counselling program.

12/1 - Jesse Puljujarvi, the Edmonton Oilers’ fourth overall pick from 2016, has let the Oilers know he won’t be playing for them again, signing in Finland with Kärpät. He has an out clause allowing him to return to the NHL by December 1st if the Oilers trade him to another team. The Canucks should, at the very least, kick the tires on the 21-year-old 6’4” winger.