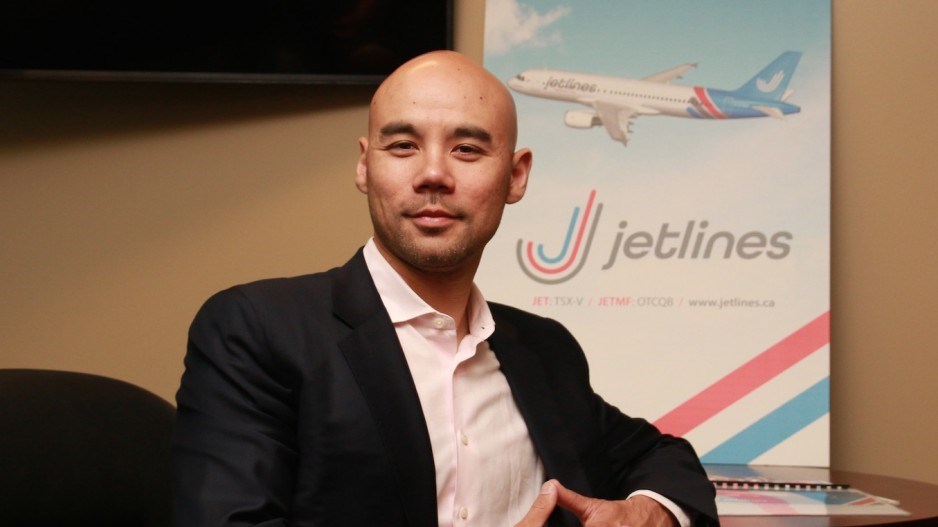 Lukas Johnson, who was Canada Jetlines' CEO for scarcely more than a couple months in the summer of 2018, allegedly worked with a competitor behind the airline's back. Photo Rob Kruyt/Business in Vancouver

Troubled aspiring ultra-low-cost carrier (ULCC) Canada Jetlines Ltd. is suing WestJet co-founder and airline serial entrepreneur David Neeleman, as well as his DGN Corp., and Breeze Aviation Group Inc., for working with former Jetlines CEO Lukas Johnson behind its back, hiring him, and then phoning an anticipated Jetlines financier to reveal that Jetlines no longer had Johnson as CEO.

Its statement of claim, filed Nov. 19 in United States District Court in Connecticut, reveals a sordid tale of alleged corporate scheming that scuttled Vancouver-based Jetlines’ ability to get necessary financing, and prompted the start-up venture to cancel plans to lease two Airbus A320 aircraft from AerCap, resulting in Jetlines forfeiting US2.2 million in deposits.

What was worse, Jetlines alleges, is that the call was the “death knell” in its ability to get US$80 million in likely financing from an unnamed “international investment bank.”

Former Jetlines CEO Lukas Johnson is at the centre of this tale.

Almost immediately after Jetlines chairman Mark Morabito hired Johnson in late June 2018, Johnson was allegedly in talks with Neeleman about going to work for Neeleman, who with Robert Milton, Michael Lazarus and Henri Coupron had formed Breeze Aviation Group, and planned to launch a low-cost airline that had the tentative working name of Moxy. (Neeleman is also known for launching Brazil-based Azul, thought by some to be that country's version of JetBlue.)

Jetlines’ notice of claim lays out that on July 27, 2018, Neeleman invited Johnson to take a red-eye flight from Vancouver to New York, and then travel to Norwalk, Connecticut, for dinner the following day with Neeleman, and possibly other Moxy personnel. The lawsuit claims that “secret discussions concerning Moxy’s business” were discussed along with ways in which Johnson could assist its success.

Before that meeting, Moxy officer Kyle Smith allegedly forwarded a nondisclosure agreement (NDA) between Moxy and Johnson, for Johnson to sign and return, which Johnson did via his personal Gmail account, according to the lawsuit.

“Evidently in obedience to his new contractual obligations to Moxy under that NDA — which conflicted with his fiduciary and contractual duties to Jetlines — Johnson did not at any subsequent time disclose to Jetlines the existence of the NDA, nor the fact and/or substance of his travel to Connecticut for covert discussions with Neeleman and Moxy,” Jetlines claims in its lawsuit.

Had Jetlines known that its CEO was in confidential talks with a potential competitor, it would have “pre-empted” further talks, it noted.

Instead, Johnson spoke with Neeleman and others at Moxy until Aug. 27, when Johnson told Morabito that he was resigning so he could work for Neeleman and Moxy, the lawsuit notes.

Through July and August, Neeleman and others at Moxy continued to “suborn Johnson’s rendition of illicit services to their nascent airline venture,” according to the lawsuit.

“Johnson continued with their knowledge and on their behalf to mislead Jetlines into believing that he would be instrumental to Jetlines’ financing and operational efforts for the foreseeable future,” Jetlines alleged.

During the time that Jetlines employed Johnson, he advised Neeleman on specifics such as the economics and interior configurations of Airbus aircraft to be purchased and operated by Moxy, Jetlines alleges.

On Aug. 5, 2018, Neeleman and others at Moxy provided Johnson with electronic access to Moxy’s files, one of which, an Excel spreadsheet, Johnson saved on his Jetlines-issued computer, the lawsuit alleges. This document contained detailed information concerning, among other things, the expected performance, economics, revenue model and investment analysis of “Project Moxy” aircraft, and obtained his input regarding their plans, Jetlines alleges.

Moxy then allegedly offered Johnson a job on either Aug. 20 or 21.

“During the period late July through late August 2018, Neeleman knew that Jetlines’ and the bank were poised imminently to launch Jetlines’ financing campaign, knew the crucial importance of new financing to Jetlines’ ability to commence operations, and knew the leading role of Johnson in those efforts and in Jetlines’ relationship with the bank,” Jetlines alleges.

“Neeleman knew that luring Johnson away from Jetlines at that critical moment would damage if not destroy Jetlines’ relationship with the bank, and would injure if not cripple Jetlines’ ability to enter the North American ULCC space with a business model similar to that of Moxy,” the lawsuit alleges.

Indeed, the bank in question terminated its financing agreement on Dec. 8, 2018.

“I’m going in with a fresh look at a lot of the business model,” he said. “I’d like to re-evaluate, not the business model of it being a ULCC, but some of the route structures and where we think we have the best opportunities.”

Skip ahead to Oct. 28 of this year and Jetlines revealed that its plans to launch were indefinitely suspended.

The aspiring ultra-low-cost carrier's (ULCC) investors, SmartLynx and InHarv ULCC Growth Fund, pulled the plug and terminated their investment commitments and, as a result, the company said that it would not pay additional deposits and will not receive its first two Airbus 320 planes that it had anticipated receiving this month.

"No further date will be announced [for a flight launch] until funding is secured," the airline said in a release.

Jetlines CEO, Javier Suarez, who had taken over for Johnson, tendered his resignation effective immediately.