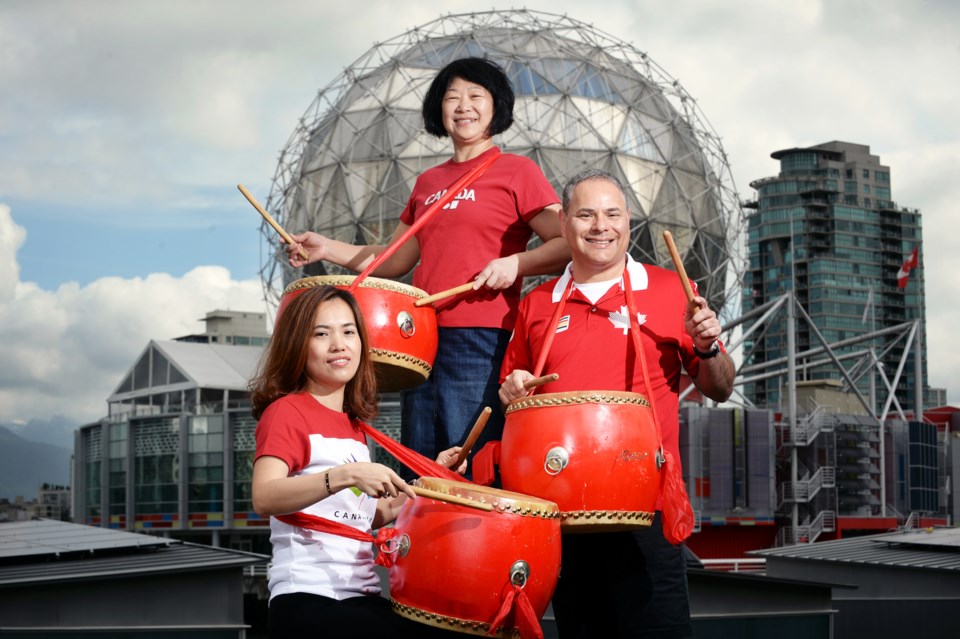 Left to right: That Pham, Jing Yang and Sam Corea will be joined by dozens of other drummers July 1 in an attempt to break a Guinness World Record for most nationalities represented in a single drum circle. Photo Jennifer Gauthier

Richard Wong would like to teach the world to drum, in perfect harmony.

He’s going to give it his best go on Canada Day, when he and other volunteers convene at Science World to attempt to set a world record for the most nationalities represented in a single drum circle.

“In almost every culture, when they celebrate something exciting and happy, the best form of celebration is to hit the drums to express the feelings of happiness and excitement and that’s how we came up with this idea,” Wong said.

The celebration of all things percussive and Canadian is three years in the making. A federally incorporated non-profit society dubbed The Legacy 150 Celebrations Society was first set up, volunteers hopped on board and the plan was hatched.

Alongside a group of other Chinese-Canadians volunteers, Wong wanted to organize a cross-country event that speaks to anyone regardless of age, ability, religion, race, ethnicity or gender.

Drumming was then selected as the cross-cultural catalyst to celebrate Confederation.

“Before we are even born, the first thing we hear is the heartbeat of our mom — this is the sound of drumming,” Wong said. “We are very proud to be Canadian, so we want to be part of a celebration to this very special place we call home.”

According to event organizers, there is no precedent or current record for the largest simultaneous drum circle. With no starting point to reference, the group pitched its idea to record keepers with the Guinness World Records and the parameters were set: at least 50 nationalities must be represented, while drumming to a pre-planned piece of music for more than five minutes.

The Vancouver event will feature two separate percussive portions. The 11 a.m. jam represents the Canada-wide drum circle, with participants using hand-held, portable drums like bongos, congas and djembes. Simultaneous events will then kick off across the nation, with participants drumming along to O Canada three times over — once each for the Pacific, Atlantic and Arctic oceans. The final two minutes will be an open jam where drummers can knock their socks off however they see fit.

At 11:15 a.m., the Vancouver group re-mounts its efforts to vie for the record books.

Wong’s group is still on the lookout for participants to round out the ranks of the 50 nationalities. One week in advance of the record attempt saw confirmed participants from China, Korea, South American nations, Australia and Switzerland.

Those interested in getting their groove on must have a valid foreign passport, attend one rehearsal before July 1 and have a basic knowledge of rhythm.

The record attempt kicks off at 10 a.m. at Creekside Park with welcoming events, while the drumming takes place at 11 a.m. Loaner drums will be on hand for those who don’t own any. For info or to be a part of the project, log on to www.canada150drumming.com.